January 11, 2014
A UK Daily Mail article on former defense secretary Robert Gates who served in both the Obama and Bush administrations exposes damning allegations in a new book which describes Obama as 'a feckless commander-in-chief who was less interested in winning wars than in taking political advantage of withdrawing America from them' and in one meeting Hillary Clinton and Obama admitted they opposed Iraq troop surge only for what in essence amounted to cowardly, selfish political advantage. 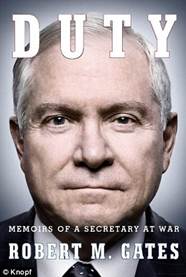 Robert Gates, secretary of defense under Barack Obama and George W. Bush, argues that Hillary Clinton used craven, Machiavellian political tactics in 2006 when she announced her opposition to Bush's Iraq troop 'surge' just before entering the presidential race. Gates writes that subsequently she admitted making that decision as to avoid being politically outflanked by Obama as they entered the 2007 primary season. This blockbuster revelation could prove problematic for Clinton as she prepares what politicos characterize as a second run at the White House in 2016.

From the initial planning stages the former defense secretary says Obama knew his own troop surge – the move of 30,000 troops into Afghanistan – would fail, yet he callously pursued this ill-conceived escalation of the war in Afghan to keep a cynical political promise he made during the 2008 election. Gates also criticized VP Joe Biden, saying he 'has been wrong on nearly every major foreign policy and national security issue over the past 40 years.' The White House timidly responded, saying Obama 'disagrees with Secretary Gates' assessment' and stubbornly defended Biden as a 'leading statesman' while leaving Gates' criticism of Hillary unchallenged.

One of the most discussed portions of this memoir describes a 'remarkable' exchange he witnessed, Robert Gates writes about when 'Hillary told the president that her opposition to the [2007] surge in Iraq had been political because she was facing him in the Iowa primary.' Obama, too, 'conceded vaguely that [his] opposition to the Iraq surge had been political,' Gates recall. 'To hear the two of them making these admissions, and in front of me, was as surprising as it was dismaying.'

Yet I would ask Secretary Gates why would it surprise you (or any rational person not beset by leftist politics) that the two leading members of the Democrat Socialist Party would use Machiavellian tactics of 'might makes right' and 'the ends justify the means' to gain political advantage at every opportunity? Remember it was political philosopher Machiavelli (1469-1527) the patron saint of leftist political skullduggery who infamously said, "It is better to be feared than to be loved," or as Lord Acton wrote of Machiavelli, "State power is not bound by moral law."

And Gates recounts how, as the president lost faith in Gen. David Petraeus' handling of hostilities in Afghanistan, he – Gates – lost faith in Obama's commitment to accomplishing much of anything. 'As I sat there,' he recalls, 'I thought: The president doesn't trust his commander, can't stand [President Hamid] Karzai, doesn't believe in his own strategy and doesn't consider the war to be his.' 'For him, it's all about getting out.'

Now there's the rub as Shakespeare would say: Former Secretary of Defense Robert Gates has given Republicans something- a huge cudgel to bash Hillary over the head in 2016 presidential elections with new revelations about what the GOP will view as Hillary Clinton placing crass, cowardly political expediency over principle. Gates writes his recollections about Obama's own troop surge, a move of 30,000 armed personnel into Afghanistan meant to stabilize the country in advance of a final all-out troop withdrawal. (Remember that Gen. Petraeus insisted on at least 50,000 troops be sent to Afghanistan in order to insure a successful mission, but Obama refused). The commander-in-chief, Gates says, was 'skeptical if not outright convinced it would fail.' 'I never doubted Obama's support for the troops,' Gates insists, 'only his support for their mission.' That's Washington-speak for Obama didn't believe in the troops or the mission in Afghanistan.

Ultimately, Gates nearly quit over Obama's duplicity and cowardice about Afghanistan, he writes. The Bush administration hold-over reveals in his memoir that he was 'deeply uneasy with the Obama White House's lack of appreciation – from the top down – of the uncertainties and unpredictability of war.' Describing a contentious day when Obama evaluated his Afghanistan strategy, Gates recalls: 'I came closer to resigning that day than at any other time in my tenure, though no one knew it.'

Who then is ultimately to blame when cowardly politicians not only don't pay a political or legal price for using our brave troops as cannon fodder and as faceless means to their own craven, political ends is We the People. It is the American voter who for whatever reason – leftist media propaganda, low information voters, a go-along-to-get-along philosophy, people being willing dupes for political hacks no matter what, cult of personality, etc. – in the end it is us the American voter that puts scoundrels like Obama and Hillary Clinton in office and empower them to elevate their morally bankrupt cronies to make decisions over our lives most tragically deconstructing the constitution and destroying our liberties and freedoms by their socialist and nihilist policies. The ultimate enemy of freedom, natural law and constitutionalism is not Obama, Hillary, socialism or the welfare state, it is the man or woman looking back at you in the mirror... no one else!

Gates views Obama's war Iraq and Afghanistan strategy as wholly servile to preserving and deifying his overarching political career, writing that during his tenure at the Pentagon Obama 'simply wanted to end the "bad" war in Iraq and limit the U.S. role in the "good" war in Afghanistan.' However, the president's specified strategy for withdrawing troops Iraq and Afghanistan, he claims, 'conflicted with his own pro-war public rhetoric (especially during the 2008 campaign), the nearly unanimous recommendations of his senior civilian and military advisers at the Departments of State and Defense, and the realities on the ground.' Finally, he concluded, Obama was 'inexperienced' yet 'determined to change course – and equally determined from day one to win re-election.' 'Domestic political considerations would therefore be a factor, though I believe never a decisive one, in virtually every major national security problem we tackled.'

I repeat Obama and Hillary acted cowardly, callously and with Machiavellian tactics used our brave troops to further their own political careers and once having seized ultimate political power, sacrificed by the tens thousands our U.S. soldiers by expanding a foolish war in Afghanistan, by weakening our stronghold in Iraq and destroying our foreign policy in the Middle East, so that these cowards among heroes could prance around on stages across the world and lie to the American people about how great a statesman they were... Not!

May Gates's memoir and the subsequent public debate it will engender, open up the gates of Hell against Obama, Hillary and the Democrat Socialist Party for committing treason against our heroic troops who gave their lives, blood and treasure in Iraq and Afghanistan wars... for nothing.