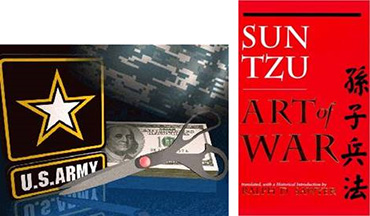 We have departed from the maxim of "peace through strength" to a belief in "appeasement through weakness."

Defense Secretary Chuck Hagel is expected to announce draconian military cuts that would reduce the U.S. Army from 490,000 troops to between 440,000 to 450,000, the elimination of the entire fleet of Air Force A-10 attack jets, enforce a one-year suspension on the salaries of general and flag officers; limit the rise of basic pay for military personnel to 1 percent, decrease the $1.4 billion direct subsidy which is given to military commissaries, and reduce the growth of tax-free housing allowances for military personnel while many military retirees will see an increase in health insurance deductibles and co-pays.

Remember the SDS mantra from the1960s: "The issue is never the issue. The issue is always the revolution." Obama is a socialist/progressive revolutionary whose military budget cuts are specifically designed to deconstruct the U.S. military because to the American Left the U.S. storied history is a fraud achieved by stealing, killing, plundering, enslaving, and spreading diseases to other peoples and nations. Now it's payback time and the U.S. must be put back in our place just like any other nation. To the Progressive Left America is not exceptional nor is she a Superpower and President Obama will use his vast powers to lead us with the white flag of retreat from global leadership – away from our former superpower status brought to us 30 years ago by President Reagan.

Many commentators I've read think that the U.S. Army has been cut down to the smallest size since the 1940s. Actually, the army has not been this small since the 1930s during FDR's early years as president. Few people may remember those grainy film clips of U.S. soldiers forced to train with wooden guns and training pilots with wooden boxes as cockpits. Under FDR, before we got serious about fighting Hitler's fascism, our soldiers were reduced to pretend fighting against Hitler and the Nazis with the playful imagination of 10-year-old children... broom sticks as guns and wooden boxes as airplanes. Have we not learned from history?

Historically, the U.S. has more often than not foolishly ignored the great military strategist Sun Zhu's aphorism who said, "In times of peace, prepare for war..." Why? Take WWII for example, Hitler and the Nazis as part of the 1919 Versailles Treaty were expressly prohibited from rebuilding their war machine after Germany's defeat in WWI, yet for 20 years the appeasement, Quisling leaders in America and Europe sat idly by while Germany not only rebuilt her military machine, but modernized all facets of it to become the greatest army in the world when Hitler unleashed his blitzkrieg against Poland on Sept. 1, 1939.

This geopolitical tragedy occurred because the Axis Powers – Germany's Hitler, Italy's Mussolini, and Japan's Hirohito, believed America was too diffident and isolationist to wage war against them – 75 years ago they were right and the Axis Powers almost conquered the world. Now today with Russia, China and the powder kegs all over the Middle East, the Obama administration and the Democrat Socialist Party are not only glorifying their ignorance of history, they seem hellbent to deconstruct America and all of her great institutions by any means necessary while our enemies like Russia is docking warships in the Cuban harbor just 90 miles from the Florida coast and is currently seeking military bases in 7 other countries across the world; China is regularly performing military maneuvers with its revamped navy in the China Sea, and Iran is very close to possessing its own nuclear weapon arsenal which they have vowed to use against 'Big Satan' (U.S.) and 'Little Satan' (Israel).

Pentagon officials acknowledge that the customary American position of being capable of fighting wars on at least two fronts has been tempered so that if such an incident occurred, victory would much more difficult to obtain and there would be many more casualties. Also, just like America was unprepared at the beginning of WWI, WWII, Korea, Vietnam, Iraq, Afghanistan, Syria and now Ukraine, under Obama's Neville Chamberlain-like appeasement policies have only emboldened our enemies further against America and against our vested national interests making the U.S. progressively more isolated and irrelevant in the world of nations.

Remember our constitution authorizes Congress to create and fund an Army and a Navy (Article 1, Section 8, Clauses 11-14). The Army was to be refunded every two years as a needed; the Navy on the other hand was authorized constitutionally to be perpetual for two reasons, 1) to protect our coast lines from foreigners and invaders (which Obama's amnesty for illegal aliens policy fails to achieve), and 2) to protect the sea lanes in order for commerce to flow freely on the seas. For over 100 years since Woodrow Wilson first deconstructed the military to fund his Progressive Revolution beginning in 1913, America has rejected the original intent of the constitutional Framers because the Progressives and their willing allies of the Democrat Socialist Party have repeatedly had America fighting wars for the vested interests of other nations and not to support U.S. vital national interests as mandated in the constitution and under federal law. As mentioned earlier, in the 1930s the U.S. was ill-prepared to fight Germany's Hitler and the Nazis, Italy's Mussolini and Japan's Hirohito, which only emboldened these tyrants leading directly to WWII. To appease an aggressor is to encourage an aggressor.

While America must remain a superpower and a world leader through a strong military, we must also remember President Eisenhower's advice to beware of the "military industrial complex" in a Jan. 1961 speech where he warned that most wars in the modern era have been funded by the industrialists of the world including those who have a Machiavellian means/ends to profit from producing weapons of war for war's sake and not for legitimate, identifiable national interests. To these evil men our brave soldiers are mere cannon fodder. Did we heed Eisenhower's prescient warnings? No, America has entered into one foolish, tragic war after another with no intent to win quickly and decisively; no discernable military, political, or strategic end, yet the causalities left behind has exploded into the hundreds of thousands just since the Vietnam War alone... for what?! I am not an Isolationist, yet the original intent of the constitutional Framers, those great men who bequeathed to us our Constitution, our Bill of Rights and our Declaration of Independence preserved the right for everyone in the U.S. to pursue their dreams, their right to happiness and not the right to be thrown into one misbegotten war after another propagated by the vast military industrial complex.

Yes we need peace through military strength but that strength comes through our tactical and strategic naval forces protecting our constitutional rights, our national borders through their sacred sacrifice of blood and treasure. I would be the first to say our Pentagon is bloated, it is wasteful through each of its branches, yet Obama's approach to deconstruct the military to fund his domestic welfare state programs is tantamount to treason and will place America at an increasing geopolitical disadvantage.

The billions the U.S. wastes on defense every year defending countries that hate us makes no sense. After spending $6 trillion on defense during the course of the 11+ year war in Afghanistan and Iraq, the US pulled out of Iraq in 2011, however, the insurgency is ongoing and continues to cause thousands of fatalities. Even more outrageous is for that same $6 trillion military investment, we are not even close to winning the war in Afghanistan against a bunch of illiterate farmers who have no jets, no air craft carriers, and no attack helicopters, not even boots and helmets in what has pathetically become the longest war in US history – Already twice as long as WWII where the Allied Powers defeated Hitler, the Nazis, Mussolini and Hirohito in less than 6 years and saved the world from a new Dark Age of fascism.


For Obama and Hagel to believe taking the US Army down to pre-World War II levels is a smart decision evidences their abject stupidity in comprehending the global conflagrations in which we are embroiled – the enemy has a vote. This whole inane statement about "pivoting to the Asian-Pacific rim" is more empty rhetoric as we decimate our US Naval strength while China builds theirs.

Barack Hussein Obama cannot be seen as a Commander-in-Chief and I will never refer to him that way. His fundamental transformation of America means weakening our nation and leaving our Republic less secure.


Obama and the Democrat Socialist Party are hellbent on deconstructing America by confiscating the military budget to enslave millions of citizens to the welfare state for generations to come, thus ensuring an existential voter base for a perpetual Democrat Socialist Party, yet the great military theorist Sun Tzu in his classic treatise, "The Art of War" said these ancient words which America must heed today if we are to survive: "In times of peace prepare for war, in times of war prepare for peace. The art of war is of vital importance to the state. It is a matter of life and death, a road either to safety or to ruin. Hence under no circumstances can it be neglected."