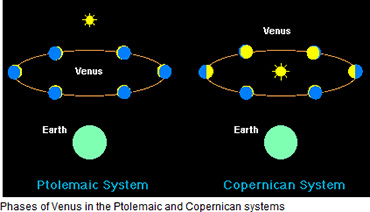 Astronomy and religion have quite separate tasks, one teaching how the heavens go, the other how to go to heaven.

Science and scientists weren't always like they are today – tools of the Leviathan socialist and progressive governments from whom most derive their livelihoods through government grants and through crony appointments and the corrupt tenure system endemic in America's universities, and at academies throughout the world. Take for example two of the most popular and enduring scientific myths that have come down to us in modern times – pseudo-scientific theories that ruthlessly dominate not only conventional scientific thought, but dictate our political policies, shape our legislation from Congress, and command our Supreme Court decisions – I speak of the theory of evolution by Charles Darwin as chronicled in his books: The Origins of Species (1859); The Descent of Man (1871) and the so-called anthropogenic or man-caused global warming (now called "climate change"). This is ironical since the original mantra of the scientific community put on the front page of Time Magazine predicted a new global Ice Age in 1975.

This essay will briefly examine the historical legacy of three great scientists of the past who refused to be corrupted by kings, popes, bureaucrats and intellectual pygmies of their day – Ptolemy, Copernicus and Kepler.

Claudius Ptolemy (c. AD 90 – c. AD 168) was a Greco-Egyptian writer of Alexandria, known as an astronomer, astrologer, mathematician, geographer, and poet. While little is known of his life, historian believe he flourished in the city of Alexandria in the Roman province of Egypt, wrote in Greek, and held Roman citizenship. Ptolemy wrote several important scientific treatises which well beyond his own time and place held continuing influence to later Islamic and European scientific development and thought. The first is the astronomical treatise now known as the Almagest ("The Great Treatise," originally called, "Mathematical Treatise"). The second is the Geography, which is a systematic argument of the geographic understanding of the Greco-Roman world in the second century. The third is the astrological treatise known in Greek as the Tetrabiblos and in Latin as the Quadripartitum (or "Four Books") in which he tried to apply horoscopic astrology to the Aristotelian natural philosophy of his times.

Nicolaus Copernicus (1473–1543) was born and died in Royal Prussia, which since 1466 was a province of the Kingdom of Poland. He was a Renaissance mathematician and astronomer who first created a scientific theory of the universe that Earth revolved around the Sun (heliocentric model), rather than the Earth at the center (geocentric model). Copernicus had a doctorate in canon (religious) law and, though he held no degrees in science or medicine, was a physician, polyglot (multi-linguistic), translator, governor, diplomat, economist and classical scholar who in 1517 set forth a quantity theory of money, a primary model in economics even in modern times, and formulated a proto version of Gresham's law in 1519, before Gresham. Copernicus' magnum opus is his book, De revolutionibus orbium coelestim (On the Revolutions of the Celestial Spheres), published just before his death in 1543, and is considered a landmark episode in the history of science. This book essentially launched the Copernican Revolution and contributed significantly to the scientific revolution.

Johannes Kepler (1571–1630) was a German mathematician, astronomer, and astrologer. A leading figure scientific revolution in the 17th century, he is famously recognized for his laws of planetary motion, based on his scientific ideas contained in such works as: Astronomia nova, Harmonices Mundi and Epitome of Copernican Astronomy. From the scientific discoveries of Kepler was laid one of the primary foundations for Isaac Newton's theory of universal gravitation.

Kepler taught mathematics at the court of many of Europe's kings, he did revolutionary work in the field of optics, invented an upgraded form of the refracting telescope (the Keplerian Telescope), and cited the telescopic discoveries of his contemporary Galileo Galilei. Kepler lived in a time when there was no clear distinction between astronomy and astrology which were often conflated together, however there was a solid separation between astronomy (a branch of mathematics within the liberal arts curriculum) and physics (a branch of natural philosophy). Kepler also assimilated religious opinions and reasoning into his work, inspired by the religious belief and conviction that God had created the world according to a logical design and universal principles which are accessible through the light of reason (natural law). Kepler defined his new astronomy as "celestial physics," as "an excursion into Aristotle's Metaphysics," and as "a supplement to Aristotle's On the Heavens," renovating the ancient tradition of physical cosmology by discussing astronomy as related to a universal mathematical physics.

Science as the pursuit of natural truth

Astronomy could take its place in the Great Books of the Western World of ideas on the basis that some of the great books are monuments of astronomical science, demonstrating the creative and analytical powers making it one of the most outstanding triumphs of the human discovery and creation. Astronomy's greater claim might also be supported by other categories of great books – of mathematics, physics, theology, and poetry – have a background and perspective of astronomical descriptions and theory. Nevertheless the addition of astronomy can be accepted by what is possibly a greater fact, that is to say, that astronomical theory identifies problems and proposes conclusions which have serious significance for the entire scope of Classical writers and their ideas.

The Great Book editors wrote about Ptolemy, Copernicus, and Kepler and their magnificent scientific legacy to the arena of ideas in this manner:


The issues raised by Plato concerning the importance of astronomy for purification and piety, for education and politics, run through the tradition of western thought. Though they are somewhat transformed in the context of Jewish and Christian beliefs, and altered by later developments in the science of astronomy itself, they remain as matters on which an author's strong assent or dissent forcefully reflects his whole intellectual position.

On the one hand, astronomers like Ptolemy, Copernicus, and Kepler, for all their differences on points of scientific theory, seem to concur in reaffirming Plato's conception of the bearing of their science on religion and morals. Lucretius and Augustine, on the other hand, while not agreeing with each other, seem to disagree with Plato. In the tradition of western thought, they represent different types of opposition to the Platonic view.


That true devotion proceeds from astronomical study is an idea derivative of Plato and his followers, including religious Christians like Copernicus and Kepler. However, Lucretius, holding to an anti-religious or humanist view of the cosmos believed that astronomy should dissuade humanity from religious superstitions. If when they "gaze on the heavenly quarters of the great upper world" and focus their meditations "to the courses of the sun and moon," without fear but with "a mind at peace" because they view only the mechanisms of natural law and no indications of a supernatural, governing power in the will of the gods, therefore men attain the natural devotion of the scientist – unlike in the attitude of Lucretius from the false worship which is founded on fear.

Science as the New Pagan god of the Modern Age

It was the anti-Christian, anti-church, pro-humanism war of the French Revolution (1789-99) that set history on a quest to replace God with "science" as the singular standard of truth, authority and relevance in society which was fulfilled 60 years later with the entrenchment (largely by Leftist academics) of Darwin's evolution atheism. God, Christianity and the church was deconstructed and banished to the realm of "philosophy" or even worst, to the realm of magic and superstition. Although Ptolemy wasn't a Christian (like Copernicus and Kepler), all three based their scientific theories and works on natural law and universal principles created by God which He established since the foundations of the world. The work left to us by these three scientific geniuses set a sure foundation of truth for others to build upon... and thus their legacy to humanity is still paying great dividends to this day.

I wonder what lasting legacy scientists of today will leave by erecting their unsure foundation on the sand government cronyism where the socialist bureaucrats dictate to the scientists what "science" is (i.e., government approved as the science they will pay for) like the lucrative pseudo-science scam of climate change? Or the uncertain, ever-changing primordial swamp of Darwin's racist, scientific fairytale of evolution atheism?

Ptolemy, Copernicus and Kepler believed in genuine, true science to reveal and explain God's natural wonders both visible and hidden in creation. Evolution atheist and Climate Change scientists of today believe in government grants to peddle scientific lies and socialist propaganda to the detriment of the people and their sacred institutions.

*N.B.: This essay is based in part on ideas from Great Books of the Western World, Robert Maynard Hutchins, Editor-in-Chief (University of Chicago, 1952), Vol. 2, Chap. 5 – Astronomy and Vol. 16 – Ptolemy, Copernicus, Kepler.