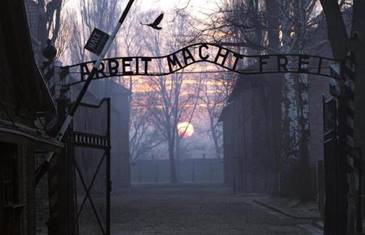 On January 27, 1945, the Soviet army arrived at the Auschwitz death camp and liberated more than 7,000 remaining prisoners who were nearly dead or too sick to leave. Of the 1.3 million people estimated that were transported to Auschwitz between 1940 and 1945, 85% or at least 1.1 million were murdered by the Nazis. Here are some of the Jewish voices the Nazi National Socialists were unable to silence... transcendent voices whispering like eternal Spirits through the ages who triumphed over Hitler's anti-Jewish madness.

So I was hiding out in the heap of dead bodies because in the last week when the crematoria didn't function at all, the bodies were just building up higher and higher. So there I was at nighttime, in the daytime I was roaming around in the camp, and this is where I actually survived, January 27, I was one of the very first, Birkenau was one of the very first camps being liberated. This was my, my survival chance.

And they said, "From now on you do not answer by your name. Your name is your number." And the delusion, the disappointment, the discouragement that I felt, I felt like I was not a human person anymore.


These perfect voices of Holocaust survivors can be found by visiting the essential website on the Holocaust at the U.S. Holocaust Memorial Museum, in Washington, D.C.

In mid-January 1945, as Allied Soviet troops steadily advanced towards the Auschwitz-Birkenau death camp complex where over one million Jews were tortured and killed by the Nazis, however the ordeal of the Jewish survivors was far from over. Heinrich Himmler's elite Nazi units, the notorious Schutzstaffel (SS) began evacuating Auschwitz and its outpost camps. In frigid winter conditions, approximately 60,000 Holocaust Jews were forced out of the Auschwitz camp complex to march west to the city of Wodzislaw in the western part of Upper Silesia. Although thousands of Jews had been murdered in the camps before the Soviet troops arrived, tens of thousands of mostly Jewish prisoners, would die on the Auschwitz death march west due to sickness, hunger, and exposure where SS guards shot anyone who slowed down the march, or in any way was unable to keep up. Estimates of those who died from the Auschwitz death march are about 15,000.

I wrote this message yesterday on my Facebook page: To all my Jewish Facebook Friends, I wish God's Holy Blessings to all Holocaust survivors on this, the 70th Anniversary of the Liberation of the Auschwitz-Birkenau death camp, January 27, 1945, by Allied Soviet troops. Of course President Obama, the great enemy of the Jews and backstabber of the Nation of Israel won't have time in his busy schedule to personally visit Auschwitz for this extremely important memorial, but will cut short his visit to India by personally attending the funeral of Saudi King Abdullah, the modern spiritual father of ISIS and Wahhabism, the most genocidal form of militant Islam and Muslim terrorism.

Also, I wish everyone of Jewish lineage or to those who have any Jewish people in your family, I extend my sincerest condolences on the International Holocaust Remembrance Day tomorrow. Let us join in solidarity with our Jewish brothers and sisters both here in America and throughout the diaspora in saying... NEVER AGAIN! However for those people and nations who still love freedom and respect liberty it can only be secured through the techniques used by our forefathers used to break the chains to colonial slavery and tyranny, particularly – Higher Law, Natural Law and Natural Rights which is the application of God's word the Bible together with America's Judeo-Christian traditions of intellectual thought with our existing laws, statutes and constitutions. In other words I agree with St. Augustine, St. Thomas Aquinas, the Framers and Martin Luther King that any law that violates God's eternal law or natural law is not law but a perversion of law amounting to tyranny, fascism and Nazi law that must be disobeyed and eradicated from the realm of legitimate law.

For example, in his famous essay, Letter from a Birmingham Jail (April 16, 1963), Dr. Martin Luther King, wrote these words based on Natural Law moral philosophy and the ideas of the constitutional Framers:


"How does one determine whether a law is just or unjust? A just law is a manmade code that squares with the moral law or the law of God. An unjust law is a code that is out of harmony with the moral law. To put it in the terms of St. Thomas Aquinas: An unjust law is a human law that is not rooted in eternal law and natural law. Any law that uplifts human personality is just. Any law that degrades human personality is unjust. All segregation statutes are unjust because segregation distorts the soul and damages the personality. It gives the segregator a false sense of superiority and the segregated a false sense of inferiority. Segregation, to use the terminology of the Jewish philosopher Martin Buber, substitutes an "I it" relationship for an "I thou" relationship and ends up relegating persons to the status of things. Hence segregation is not only politically, economically and sociologically unsound, it is morally wrong and sinful."


In the mid-1930s Adolph Hitler and the Nazis gave the world the cynical, evil slogan: Arbeit macht Frei (Work makes you free). Of course the Nazis never intended the 6 million Jews they imprisoned, tortured inside their hellish abode would ever see freedom. It is a paradox of history that in the real world hard work and industry does free you from indolence, sloth and laziness, however, the evil promises of freedom the Nazis made to millions of Jews only brought an ignoble death to innocent Jews inside Auschwitz and the 42,500 other death camps spread throughout Germany and Nazi-controlled countries.

Nach Hitler, kommen wir ("After Hitler, we come") is the old fascist slogan German communists used in the Nazi era, however few people understand that this worldview has been applied in modern times where the intellectual allies and political descendants of Nazi fascism – the Leftist intellectuals, the Academics, the Evolution Atheists, the Marxists, Communists, Socialists, Liberals, Feminists, Unionists, Occupy Wall Street, Globalists and Progressives, etc... have taken over where Hitler left off.

Zuerst braun, dann rot ("First brown, then red") has the historical meaning: "First the Nazi Brownshirts rule, then Communist red takes over." This was what the German Communists told their members after Hitler rose to power on January 30, 1933. The Communists never issued a retraction of that proven and effective military tactic and societal strategy and now 70 years later we see before our very eyes the apotheosis of Marxism, Socialism and Communism euphemistically called "Progressive" or "Progressivism" which like the Hydra or Kraken from Greek mythology, has arisen anew in multiple forms from the abyss of Hell to deconstruct, dominate, control and to essentially rule over every country in Europe, Russia, the Far East, Middle East, South America, North America and especially here in the United States, the supposed land of Democracy, liberty and Natural Law.

On this the 70th Anniversary of the liberation of the Auschwitz death camp and the day we memorialize as International Holocaust Remembrance Day, let us collectively end the worldview based on the Nazi Era Arbeit mach frei, which history has judged only turns dreams of the innocent Jews into ashes inside Nazi Holocaust ovens. Let conservatives, Christians and Jews collectively unite in solidarity to end the liberal fascism based on the worldview of Reich macht frei (government makes you free) established here in America in 1913-2015 by the Progressive quartet – Woodrow Wilson-FDR-LBJ-Obama that is essentially Welfare socialism or Welfare slavery, and let America and my Jewish friends join in solidarity to effect real, existential change to move the world back to the original intent and Natural Law of our Founding Fathers and America's constitutional Framers, lest an even greater Hitler and more diabolical Nazi Party we today know as ISIS, Muslim terrorism and Islamic Jihad destroy our glorious Judeo-Christian traditions and thus shroud the entire world in a resurrected 1,000 year Reich of Shadow and Genocide.

Roman Kent, an Auschwitz survivor attending today's commemoration at the death camp in Poland said it best, "We don't want our past to be our children's future."