Ellis Washington
Is Hillary too big to fail?

March 18, 2015
Prologue to the Wicked Witch of the Upper West Side

After reading a Breitbart article with the controversial title, "Is Hillary too big to fail"? I made the following comments on my Facebook page: "Is anyone in America too big to fail? This silly worldview got us into the Wall Street Collapse of 2008 by the Socialist-Progressive policies of President George W. Bush, thus paving the way for the demagogue Socialist Obama to ascend to the throne" where he has systematically, brick-by-brick endeavored to deconstruct America's moral institutions and her Judeo-Christian traditions. "Too big to fail also smacks of idolatry where God constantly warns Israel in the Bible: Thou shalt have no other gods before me. Do We the People own our government? Do We the People any longer control our government, or like Dr. Frankenstein's monster does the U.S. government control, yes even enslave US? 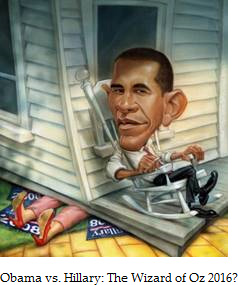 Hillary isn't alone in her outrageous violation of federal records keeping policy, but is it a simple rule violation or a crime, a felony? For this reason Obama and his Lady Macbeth senior advisor, Valerie Jarrett have six ongoing investigations into Hillary's tenure as Secretary of State and reportedly Jarrett has been leaking embarrassing information about Hillary's corruption to the press – primarily the Washington Post and the New York Times. On my Facebook page last week I made the following comments: "Obama's 'Lady Macbeth' Valerie Jarrett is behind the leaking of classified info regarding Hillary whom Jarrett and Michelle Obama refer to as "Hildabeast" – I love it when bad things happen to bad people... I'm just waiting for Obama and Jarrett to one day get 'Justice' for violating the Constitution and destroying the Judeo-Christian foundations of America.

Democrats are feigning like these Hillary scandals are all much ado about nothing, down playing questions about her 'private emails' as protected communications and ignoring receipt of corrupt contributions to her foundation from oppressive Middle Eastern regimes. According to the Times, which further writes that Clinton has "been the prohibitive favorite for the Democratic presidential nomination" for two years, "keeping the party's strongest alternatives on the sidelines and depriving those who remain of potential donors and staff. Senior Democrats have built a multimillion-dollar political infrastructure to pave the way for her candidacy." However, Clinton senior advisor let the cat out of the bag last week in an interview on "This Week With George Stephanopoulos" saying, "I suspect," James Carville said, "she didn't want Louis Gohmert rifling through her emails, which seems to me to be a kinda reasonable position to take."

This stunning admission amounts to a criminal confession by Carville that he thinks Hillary may have set up her parallel computer system she controls from her home in Chappaqua, NY to avoid Congressional oversight. America, if this allegation by Carville is true, that is a felony and a patent violation of the Federal Records Act which a convicted defendant can receive a 5-10 year stint in federal prison. Ron Fournier, National Journal Senior Political Columnist and Editorial Director also remarked on James Carville's defense of Clinton, stating that "what Carville did is give up the goods. What he admitted there was that this was not a matter of convenience, which is what the Secretary said. He admitted that the reason she did this was so she didn't have to comply with the oversight of the House, and – and with the natural laws of transparency. He gave up the goods. He sold her out."

Recall a similar situation with General David Patreus and his own recent email scandal that caused Obama to immediately force his resignation as Chairman of the Joint Chiefs of Staff. Thus while Hillary is free to be the fouled-tempered monarch from Alice in Wonderland, the Queen of Hearts; free to raise millions for her pending presidential election in 2016, to avoid federal prison time David Petraeus has had to negotiate a plea agreement with the Justice Department that has "carried a recommended two years of probation and a $40,000 fine." His projected political career is effectively dead.

Hillary and the Chinese Connection

Journalist Ron Fournier, really believes that Democrats are "scared to death" Hillary Clinton's emails on Monday's "Special Report" on the Fox News Channel. The Left is increasingly fearful regarding the mounting scandals particularly the donations to the Clinton Foundation made by China and other nations whose human rights records are abysmal. "Don't buy the spin, they [Democrats] are scared to death. And there's a lot of them who are already starting to think 'is she really the best candidate for us?'...Their bench, compared to the Republican bench is awfully, awfully thin. And there's a lot of Democrats, by the way, who are saying 'follow the money.' A lot of Democrats are really worried about the Foundation, that's what they're really worried about" he stated.

Previously, Fournier said that the Clinton Foundation's acceptance of Chinese donations is "a big issue. There's a lot of other ways the Chinese government, and the Saudis, and the [Qataris] – there are other ways that they can help the world if that's what they want to do. They're giving their money to the Clinton Foundation for a reason. They want something out of it. So I know, what I really want to see in these e-mails is any e-mail that mentions the Foundation and mentions one of the donors." One donor which has caused Hillary a big headache since the email story broke is Rilin Enterprises who pledged $2 million in 2013 to the Clinton Foundation's endowment. The company is a privately-held Chinese firm which is owned by billionaire Wang Wenliang, who is also a delegate to the Chinese parliament, therefore since we are talking about Communist China here, the firm is owned by the Communist Chinese government. Public records indicate the company has spent $1.4 million since 2012, lobbying Congress and the State Department. The company owns an important port along the border with North Korea and was likewise one of the contractors that built the Chinese embassy in Washington, D.C. That contract is a direct connection to the Communist Chinese government, according to Jim Mann, a respected author and expert regarding China's connections with American multinational corporations.

With "embassy construction, one of the most important tasks is making sure that there are no bugs there," he said. "So you want to have the closest security and intelligence connections with and approval of the person or company that's going to build your embassy." "If the point is you are not going to take money from foreign governments, then his construction company is as close to not just the Chinese government, but its Ministry of State Security as they could possibly be," said Mann. "Indirectly the Clinton Foundation has political influence, that's why people give to it," said Mann. "People give to the Clinton Foundation particularly because it is the Clintons and because they are prominent politicians in the United States."

How meticulous was Clinton's procedures for protecting, cataloguing and deleting emails? Who should be in charge of handing over Hillary Clinton's emails? A tech blogger has written an interesting article explaining from a technical standpoint but in layman's terms that Hillary Clinton's server was highly unprotected and her classified emails open for any hacker or enemy country to exploit and use against America. Constitutionally speaking, as Secretary of State, she was fourth in line of succession and arguably the most powerful position after the President of the United States, so you can imagine the treasure trove of information that was in potential jeopardy due to Hillary's lawless and arrogant behavior. Therefore, these and dozens of other troubling questions have arisen to vex Hillary's heavily-scripted 2016 presidential announcement in April.

America, don't believe the hyperbole. The Democrat Socialist Party and their lapdog media like MSNBC, ABC, CBS, NBC, CNN, the Washington Post and the New York Times are deathly afraid because as long as Hillary Clinton believes that she is too big to fail, then according to a New York Times report, should Clinton falter, "the party has no easy way to replace her." This is why I love it when bad things happen to bad people and why my daily prayer is this: "Dear God, please knock down every idol of the arrogant affluent, every icon of the rich and powerful who men say is 'too big to fail.' Dear Lord, bring down to the dust of the earth every demagogue that men in their pride and self-will have raised up in your face, Amen."