Ellis Washington
Ernst Röhm: the rise and fall of the pink swastika

September 26, 2015
"Lively and Abrams call attention to what Hitlerism really stood for, abortion, euthanasia, hatred of Jews, and, very emphatically, homosexuality. This many of us knew in the 1930's; it was common knowledge, but now it is denied..."

"A well-researched book. The central theme that the Nazi movement was riddled with homosexuals is certainly true." 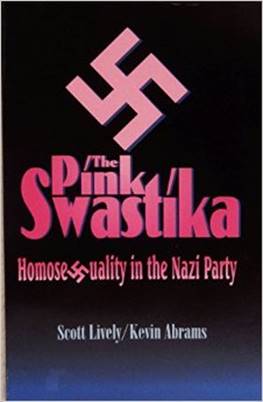 Prologue to the Pink Swastika

Steve Baldwin, Executive Director, and Council for National Policy, in his comments regarding The Pink Swastika: Homosexuality in the Nazi Party, a 1995 book exposing the extensive numbers of homosexuals within the Nazi Party, particularly within the Nazi Leadership and the SA, by authors Scott Lively and Kevin Abrams: "Excellent book! This book gives ample evidence that the sexual perversion of homosexuality easily lends itself to authoritarian impulses....The underlying theme is that when a society accepts a moral relativistic philosophy (leading to acceptance of homosexuality) it could very well lead to the eventual destruction of...constitutional rights..."

My intent in writing this essay is not to demonize homosexuals, nor belittle their tragic plight during the Nazi Era, but to bring my expertise as a Holocaust historian and expert on Nazi Law to a modern historical context while more comprehensively vetting this vital aspect of Nazi history.

A major theme of The Pink Swastika book was not to dispel the conventional view held by many mainstream Holocaust scholars; that the Nazis oppressed homosexuals, which they did but in proportionately much smaller numbers than the Jews suffered. Here I want to expose the policy consequences and hypocritical treachery behind the Nazi pretext to cover up and hide their role in Röhm's Purge. Furthermore, I will further analyze the authors' contention that homosexuality was encouraged throughout Nazi history, even before the advent of the Third Reich, and was a vital component to the radical cult of militarism of Hitler's Reich. For example, few people realize that the Nazi Party was created in a gay bar in Munich, and Ernst Röhm, Hitler's right hand in the early days of Nazism, was recognized for his taste in young boys. William Shirer says in his classic history, The Rise and Fall of the Third Reich, not only that Röhm was "important in the rise of Hitler," but also "like so many of the early Nazis, (he was) a homosexual."

The Pink Swastika is derivative of previous book by Richard Plant, The Pink Triangle: The Nazi War Against Homosexuals (1986), a book in which provides an interesting historical chronology of details exposing the Nazi's schizophrenic view of homosexuality during the Nazi Era – manifesting itself from de facto, unofficial Nazi policy to benign acceptance, even encouragement particularly within the ranks of the Hitler Youth (Jungen) where hundreds of thousands of underage German boys were victims of homosexual exploitation by leading Nazi officials and their subordinates.

However, after Röhm's Purge, that Nazi benign homosexual policy took a brutal turn towards homophobia and savage and sustained persecution of homosexuals. Lively and Abrams also write about the huge Nazi movement inside America under Fritz Julius Kuhn and his American Nazi Bund (1936-41). I wrote of this group in an earlier essay, Kristallnacht, DemocratNacht, and show a picture of this very popular organization (concurrent with the rise of Hitler and the Nazis in Germany), packing out Madison Square Garden on February 20, 1939 (less than 7 months before Hitler and the Nazis invaded Poland and the start World War II on September 1, 1939). 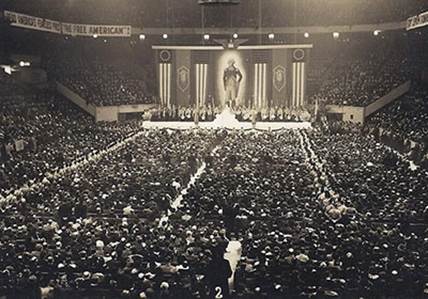 American Nazi Party rally at Madison Square Garden, Feb. 20, 1939 (FDR was president!)
The authors Lively and Abrams provide numerous historical details that lead to the conclusive fact that the majority of high Nazi officials within the Third Reich, including Adolf Hitler, Heinrich Himmler, and his right hand man in the early years, Ernst Röhm, were homosexual. The author's meticulous research and source materials, most other Holocaust scholars fear to publish, also bolster their controversial assertion that the Nazi persecution of homosexuals was limited (100,000 out of approximately 2,000,000) and only concentrated on effeminate homosexuals. One noteworthy source for The Pink Swastika was Samuel Igra's Germany's National Vice, which Lively credits as "the 1945 version of The Pink Swastika. 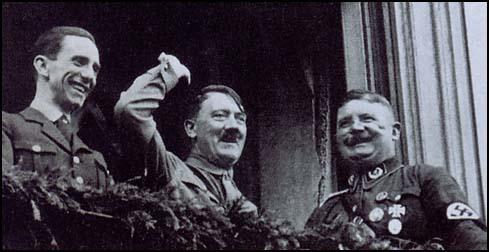 Under a now familiar Nazi pretext to consolidate absolute power in the Fuhrer alone and a Reich leitmotiv of rooting out treason within the Nazi ranks, on June 30, 1934, Hitler orders the so-called "Röhm Purge" or "Night of the Long Knives" – a brutal and merciless massacre of the SA (Sturmabteilungen; Assault Detachments) and the top officials of the Nazi Party paramilitary legions in the Germany Army (Reichwehr). Pressured by German army commanders, particularly Herman Goering and Heinrich Himmler whose backing was critical in Hitler's objective to combine his position as Chancellor with President and thus seizing absolute power in Germany, therefore Hitler commanded the SS to assassinate SA Chief of Staff Ernst Röhm and all his top lieutenants. Himmler and Heydrich savage SS also murders several conservative "enemies of the Reich" including General Kurt von Schleicher, the man whom Hitler succeeded as Chancellor, according to an article in the Holocaust Encyclopedia.

In America we have a constitutional provision prohibiting ex post facto law (Latin: after the fact), located in Article 1, Section 9, Clause 3, however, after Rohm's Purge the Nazis were under no such legal constraints, thus on Hitler's orders, the German Parliament (Reichstag) proclaims the mass assassinations legal after the fact, based on the contrived Nazi pretext that Röhm, his commanders, and their SA legions (numbering about 3 million), had intended a coup d'état against Hitler's Third Reich. The assassinations of June 30 – July 2, 1934, later became known as the "Röhm Affair" or the "Night of the Long Knives." Historian H.R. Knickerbocker writes, "Roehm, as the head of 2,500,000 Storm Troops, had surrounded himself with a staff of perverts. His chiefs were almost without exception homosexuals. Indeed, unless a Storm Troop officer were homosexual, he had no chance of advancement." Furthermore, Heinrich Himmler, second in power only to Hitler, was most likely a closet homosexual himself, since in order to rise through the SA ranks as Himmler did, could only be achieved serving Rohm's homosexual preferences faithfully and loyally (which he did) until Rohm fell out of Hitler's favor.

Remember that Socialists of every variety throughout history as masters of the Eternal Lie – from Hitler's Nazi National Socialism to Wilson/FDR /LBJ/Obama Democrat Socialism, they always follow the atheist commandment declared by the Father of Communism, Karl Marx – "The first battlefield is the re-writing of history." Using this sophistic historical strategy following the Rohm Purge, Goebbels launched a vicious propaganda campaign rooted in homophobia to expose all traitors plotting to cause a coup d'état against the Nazi Reich and plunge Germany into social turmoil and political anarchy. In rationalizing the assassinations, Nazi Reich officials also referred to Röhm and his SA command's overt homosexuals who engaged in homosexual acts within their ranks.

The Nazi homophobic pretext against Röhm was that since he had become too powerful and unstable in favoring the company of his homosexual SA, this led to an untenable situation that threatened to destabilize both the moral foundations of the Nazi Reich and national security of the German people. This was a specious charge by Goebbels because despite the historical fact that the homosexuality of Röhm and other SA leaders was made only retroactively to publicized the "shock value" since the sexuality of Röhm and all of his SA leadership had in reality been public knowledge for years, dating back to the early 1920s, a decade before the advent of the Third Reich and was actively encouraged by Hitler and the Nazi high command.

The Nazis and the Hitler Jungen (Youth)

A critical part of the Nazi Reich Weltanschauung (worldview) was a stable of young, vigorous boys to serve as a Nazi pipeline for the homosexual SA leaders like Rohm and others. An obvious source of boys used for homosexual purposes of course would be the Hitler Youth, a ripe hunting ground used by the Nazi leadership to satiate their homosexual lusts, according to the Holocaust Encyclopedia. The historical context for this allegation was also exposed by Hans Bluher's work 20 years before the Nazi Reich, during the era of the Weimar Republic (1919-1933), where pederastic elements of the male bonding in many youth organizations led to a spike in homosexual and homoerotic activity prior to the Third Reich.

Many of these paramilitary organizations and "male clubs" fostered a radical Socialist, Fascist, and Nationalist orientation including Hitler's National Socialist German Workers' Party (NSDAP), more commonly known as the Nazi Party, a political party in Germany between 1920 and 1945, and one of hundreds existing in Germany at that time. Furthermore, in 1922 writer Kurt Hiller had estimated that 75 percent of the male homosexuals in Germany sympathized with these radical Socialist and Nationalist parties theorizing it was due to the physical attractiveness and virility of their followers, while young Germans were repelled by the Communist followers, who in their view failed to possess the requisite Germanic physical ideals of beauty. 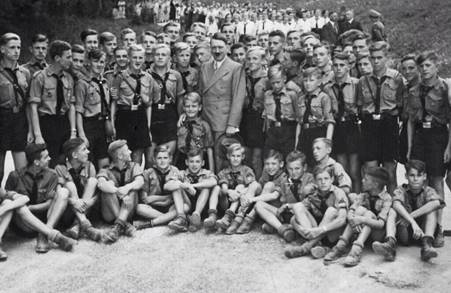 Hitler poses with the Hitler Jungen (Youth) whom the Nazis sexually exploited. Though underage, Hitler sent tens of thousands to their deaths at the final Battle of Berlin (16 April-May 2, 1945), also including older men age 50 and over.
Lebensborn ("Fount of Life")

After the elimination of Rohm in July 1934, the Reich Leader SS Heinrich Himmler (a closet homosexual himself), who's black-shirted SS replaced Röhm's SA as the Stormtroopers of the Nazi movement, emerged as the leading homophobe in the Nazi ranks and the chief architect of the incarceration of homosexuals by the Nazi regime. Yet Himmler was shocked after he discovered that 2 million men, a tenth of the German male population – and possibly even 4 million – would be withdrawn from the genetic pool of the nation and fail to reproduce because they were "contaminated by this frightful malignancy."

I believe that these incredible numbers of homosexuals among the Nazi ranks who were now of child-producing age so shocked Hitler and Himmler after the Röhm's Purge that Himmler immediately instituted the so-called Nazi Lebensborn program beginning on 12 December 1935. Lebensborn (literally: "Fount of Life") – was started as a Nazi Reich program designed to counter the rampant homosexuality and lack of children from Röhm's SA (then 3 million men strong). The immediate objective was to increase the birth rate of "Aryan" children via extramarital associations preferably between healthy Germans of child-bearing age with the Nazi classification of "racially pure" based on Nazi racial hygiene and Nazi health philosophy. I wrote about this aspect of Nazi health history in my law review article,
The views expressed by RenewAmerica columnists are their own and do not necessarily reflect the position of RenewAmerica or its affiliates.