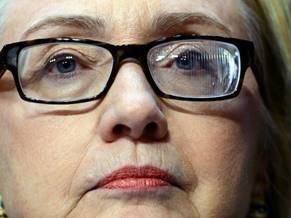 Delusions are defined as beliefs that are not supported by the cultural or religious context and there is clear evidence that they are false – nevertheless, they are strong convictions that the patient believes in completely.

You can look out the window in Las Vegas and see snow and realize it [climate change] is real.

Prologue to a Psychotic Mind

My Facebook entry, Jan. 7, 2016, had the following remarks: "Do these look like the eyes of a healthy woman who is fit to be our next President of the United States? Looking at this picture and how she is so carefully kept away from the press and away from impromptu crowds and real questioning of her views on the issues, I suspect Hillary is obviously mentally damaged, possibly suffering some form of cognitive psychosis – 'a severe mental disorder in which thought and emotions are so impaired that contact is lost with external reality.'" Remember: The eyes always tell the truth.

Psychosis is an abnormal disorder of the mind defined as a loss of contact with reality. A psychotic is therefore a person possessing this psychosis or disconnect with reality. People suffering psychosis may exhibit some personality distortions and thought disorder. Conditional to its severity is the connection to strange, bizarre, or even sociopathic conduct, in addition to difficulty with social contact and deficiency in conducting daily functions of life. Regarding the political psychosis of liberalism, radio host Dr. Michael Savage recently said on his Jan. 7th show, "Most liberals are immune to reason; their minds are already made up... You give them facts – they don't want to hear them." These are the classic tenants of psychosis.

Additional medical symptoms of psychosis according to British medical writer Markus MacGill holds that, "Psychosis is a symptom rather than a medical condition – it is not itself a psychiatric diagnosis, but a sign of a mental disorder. Psychotic symptoms may be separated out and given specific descriptions." MacGill further writes that the classic aspects of psychosis are: 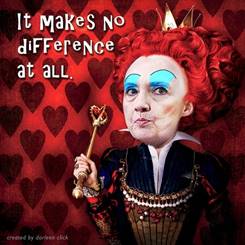 One example of a psychotic delusion of grandeur is an impossible but unshakeable belief in being a monarch or ruler of a country.

"Depending on the cause, psychosis can come on quickly or slowly. The same is the case in schizophrenia, although symptoms are more likely to have a slow onset and begin with milder psychosis, which in some cases does not convert to the full disorder," MacGill writes. "In those people who do go on to display clear-cut psychosis, the slow onset, or prodromal phase of schizophrenia, is often found later to have gone without recognition by the patient or their family and friends," MacGill continues.

The writer continues and argues prodromal psychosis will be evident if it continues untreated for two years or more, and may even develop ever more severer psychotic symptoms if the disorder remains untreated for a number of years after the initial diagnosis. The general symptoms of psychosis may include:
Thus, when Hillary Clinton boldly declares to her handpicked, poll-tested, robotic audience in Las Vegas last Wednesday: "You can look out the window in Las Vegas and see snow and realize it [climate change] is real," she not only fails to understand what most grade school children learn in fifth grade science class that weather is different from climate, but is ignorant of the facts a NSA scientist said: "The difference between weather and climate is a measure of time. Weather is what conditions of the atmosphere are over a short period of time, and climate is how the atmosphere "behaves" over relatively long periods of time." However, this proves my point that Hillary's mind is damaged and her speech and mannerism speak obviously to a person suffering sever psychotic tendencies which prevent her to function normally or effectively absent her daily psychotic drug medication cocktail.

Remember: The psychotic eyes never lie – this existence is derivative of a famous English proverb or perhaps Shakespeare: "The eyes are the window to the soul." Something is presently missing with Hillary. Her cognitive development has obviously been severely damaged beyond the abilities of Marxist Media, Inc., her political handlers, and the daily witches cocktail brew of mind-altering drugs to hide her recurrent and existential psychopathy ("moral insanity"). 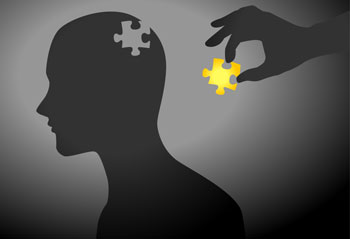 There are structural and chemical changes in the brains
of people with a psychotic disorder.

WND.com writer, Cheryl Chumley, wrote a recent op-ed, Neurologist: Hillary too 'impaired' to run, which addresses many of the psychotic symptoms I mentioned in this essay. Chumley wrote about the now growing chorus of rumors on the internet and among professional psychiatrists that Hillary Clinton's now-famous debate-stage bathroom break during the third Democrat election in late 2015 was not just an unassuming bathroom break in the least – but rather, a medically compelling act to recover from the witches cocktail brew of psychotic drugs she's daily pumped up on to deal with the unavoidable side effects of unsteadiness and confusion, due to her former concussion and blood clot, sources told Breitbart.

"And at least one member of the medical community, Florida neurologist Daniel Kassicieh, said Clinton's concussion could very well be worse than reported," Chumley wrote. "They were trying to poo-poo this off as a minor concussion," he said, to the news outlet. "[But] for someone who has treated many post-concussion syndrome patients ... I think she has latent post-concussion syndrome and I can understand that as a politician they would want to be covering that up."

All of these recent psychotic breakdowns of Hillary may be related to an event a few years before in 2012 when Clinton fainted and canceled her reserved testimony before the Benghazi Hearing before the House Foreign Affairs Committee regarding the 9/11/12 terrorist attacks that killed four U.S. citizens including her handpicked colleague and friend, Libyan Ambassador Chris Stevens. The public discovered later that Secretary Clinton had sustained a concussion during the incident, which to cover up her psychotic afflictions Clinton's aides contended was due to Hillary suffering from dehydration. 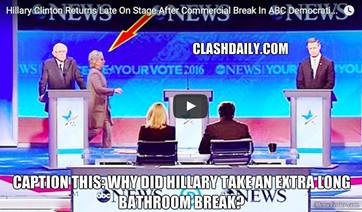 Don't be fooled by the Obama press which constantly tells us that the Republican she fears most in the 2016 presidential election is Sen. Marco Rubio. She could defeat Marco even with half of her diseased, damaged, delusional brain. Make no mistake about it the person Hillary and every Holocaust Democrat in America fears facing the most during this 2016 presidential election is Donald J. Trump – the Man-of-Action, the only conservative person living today invincible to the Machiavellian tactics of the Socialist-Progressive Left. Trust me: Trump will be the next president of the United States.

While Hillary's psychopathic political handlers pump her aging carcass full of this daily dose of psychotic, painkillers, and mind-altering drugs, if she survives the impending Congressional indictment on the mishandling of thousands of classified documents, which according to "The [FBI] has so much information about criminal conduct by her and her staff that there is no way that they walk away from this," Joseph diGenova, formerly the District of Columbia's U.S. Attorney, told Laura Ingraham in a Tuesday radio interview. "They are going to make a recommendation that people be charged and then Loretta Lynch is going to have the decision of a lifetime" to avoid a full-blown Watergate style massive revolt inside the Justice Department and inside the FBI.

If Hillary by a miracle survives this gauntlet by March or April, waiting in the wings like boxing prodigy Mike Tyson in his prime (who incidentally supports The Don) will be Trump, a man who exudes energy, power, and dynamism on levels Holocaust Democrats have no clue how to combat Because with the exception of Senator Joe McCarthy and President Ronald Reagan, they never had to deal with such a Conservative Colossus as Donald J. Trump.

Remember medical expert, Markus MacGill has a very useful definition psychosis: "Delusions are defined as beliefs that are not supported by the cultural or religious context and there is clear evidence that they are false – nevertheless, they are strong convictions that the patient believes in completely." That crushing reality alone of facing Trump will doubtlessly drive Hillary to take a double-dose of her psychosis medicine which will only drive her deeper into the abyss of delusions and distortion of reality, psychotic dystopia and psychopathy ("moral insanity"). An entrenched psychosis encapsulated in Hillary's frequent and delusional declaration of the Democrat Socialist Party: "You can look out the window in Las Vegas and see snow and realize it [climate change] is real." (Las Vegas temperature the day she spoke these words = 55 degrees).