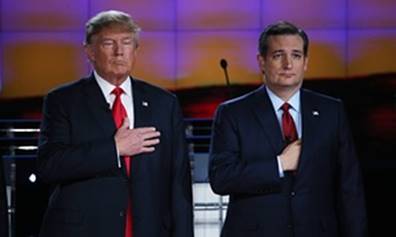 Thomas Lee, a professor of Constitutional Law and International Law at Fordham Law School wrote an interesting article for the LA Times on the question: "Is Ted Cruz a 'Natural born citizen'?" Article II, section I, clause V of the US Constitution states: "No Person except a natural born Citizen . . . shall be eligible to the Office of President." Donald Trump thinks Sen. Ted Cruz is not a "natural born Citizen" and that he is therefore constitutionally ineligible to be president, Professor Lee contends. Is Trump right?

Writer Ben Jacobs in a recent article cited Laurence Tribe's views on the issue of Sen. Cruz's eligibility for the presidency. Tribe is a leading expert on the U.S. Constitution and Professor of Constitutional Law at Harvard Law School who taught both Barack Obama and Ted Cruz. Furthermore, he counseled Al Gore in the 2000 Florida recount which went all the way up to the Supreme Court (Bush v. Gore), and has given political and strategic advice to the Obama's campaign organization. Tribe has consistently argued that the legal and constitutional questions regarding the requirement for the presidency on grounds of U.S. citizenship are "murky and unsettled." Professor Tribe is possibly the most renowned progressive law professor in America and the scholar cited most often by Donald Trump in his recent attacks on the eligibility question of Ted Cruz.

Frustrated by Cruz besting him in the Iowa polls, Trump has over the past few weeks been relentless on the Cruz birther issue citing "uncertainty" and "we really don't know" as existential leitmotivs to cast doubt in the minds of the electorate regarding whether the first term Texas senator, who was born in Canada to an American mother and a Cuban father, is a "natural-born US citizen." "Despite Sen[ator] Cruz's repeated statements that the legal/constitutional issues around whether he's a natural-born citizen are clear and settled," Professor Tribe recently told the Guardian by email, "the truth is that they're murky and unsettled."

Professor Thomas Lee cites three leading schools of jurisprudence or judicial philosophy to address the question of ultimate concern: Is Sen. Ted Cruz constitutionally eligible to be President of the United States? –
To date the Supreme Court has yet to rule on a case to determine if a present candidate for the presidency born outside of America to parents holding U.S. citizenship is eligible to be president of the U.S. according to Article II, Section I, Clause V of the U.S. Constitution?

The paradox of the textualist view of the Constitution according to Lee, is that it's historical background is also significant because "natural born Citizen" has no modern plain meaning and the words don't appear anyplace else in the Constitution. However, textualists, by comparison to originalists, like written statutes in order to determine the proper historical context of legal concepts. Thus Lee contends that applying textualist theory in the Cruz birther case, two American laws enacted in 1784 and 1790 are applicable, along with older English statutes which use the similar words "natural born subject."

In 1784, the Maryland Legislature extended "all the Immunities, Rights and Privileges of natural born Citizen" to the Marquis de Lafayette "and his heirs Male forever." And, in 1790, Congress passed a law stating that "the children of citizens of the United States that may be born beyond Sea, or out of the limits of the United States shall be considered as natural born Citizens." It didn't specify which parent, mother or father or both, but the background principle of jus sanguinis leads to the conclusion that it referred to American fathers, according to Professor Lee's legal analysis. 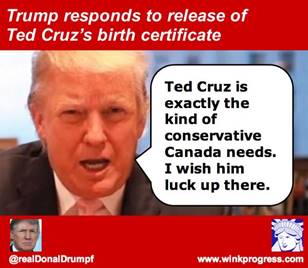 One commentator to Professor Lee's article (Ringelnatz) had particularly prescient and historically relevant remarks: Even under a textualist interpretation, Cruz is a naturalized citizen, constitutionally speaking, as is anyone who depends solely upon an act of Congress for their US citizenship, and not "natural born" –


"A person born out of the jurisdiction of the United States can only become a citizen by being naturalized, either by treaty, as in the case of the annexation of foreign territory, or by authority of Congress, exercised either by declaring certain classes of persons to be citizens, as in the enactments conferring citizenship upon foreign-born children of citizens, or by enabling foreigners individually to become citizens by proceedings in the judicial tribunals, as in the ordinary provisions of the naturalization acts." United States v. Wong Kim Ark, 169 U.S. 649, 702-3 (1898).

"Congress is empowered by the Constitution to 'establish an uniform Rule of Naturalization,' Art. I, § 8. Anyone acquiring citizenship solely under the exercise of this power is, constitutionally speaking, a naturalized citizen." Rogers v. Bellei, 401 U.S. 815,840 (1971) (Black, with Douglass and Marshall, dissenting)


Another commentator to Professor Lee's LA Times article wrote the following interesting legal analysis: "Thomas Lee actually dismantled his own argument (albeit unknowingly). First, he correctly informs us that the U.S. adopted much of English Common Law when we formed the Constitution.

However, he launches into a historical legal analysis comparing the theories of Jus Sanguinis (right of blood) vs. Jus Soli (right of the soil). This commentator believes that Professor Thomas Lee's legal analyses has some merit, but he wrongfully declares that English Common Law utilized Jus Soli which he considers was factually incorrect. The writer then cited William Blackstone and his Commentaries on the Laws of England (1776) which served as the jurisprudence model for the English Common Law and by America's early constitutional Framers to uphold the legal view of Jus Sanguinis, NOT Jus Soli. Blackstone writes:


The first and most obvious division of the people is into aliens and natural-born subjects. Natural-born subjects are such as are born within the dominions of the crown of England, that is, within the allegiance, or as it is generally called, the allegiance of the king; and aliens, such as are born out of it. Allegiance is the tie, or ligamen, which binds the subject to the king, in return for that protection which the king affords the subject. The thing itself, or substantial part of it, is founded in reason and the nature of government; the name and the form are derived to us from our Gothic ancestors.

Yet the children of the king's ambassadors born abroad were always held to be natural subjects: for as the father, though in a foreign country, owes not even a local allegiance to the prince to whom he is sent; so, with regard to the son also, he was held (by a kind of post liminium) to be born under the king of England's allegiance, represented by his father, the ambassador.


The historical background of why the constitutional Framers included the natural-born citizen requirement is ultimately what the Supreme Court will have to determine, particularly if Cruz becomes the GOP nominee and the Democrats brings a lawsuit to settle the question. Were the Framers being purposely ambiguous for posterity's sake or as I believe, was their fear of future presidents hiding duplicity or double allegiances like those held by the hated American Loyalists, (who swore allegiance to the Crown of England during the Revolutionary War) the main reason the Framers included Article II, Section 1, Clause 5 in the U.S. Constitution? We know from history that America's Founding Fathers didn't want anyone with dual allegiances. That they were very concerned at the writing of the U.S. Constitution that someone with British loyalties (or in modern times like Barack Hussein Obama had – Communist, Socialist, and Muslim allegiances) becoming President could destroy the Republic. The Constitutional Framers were right! 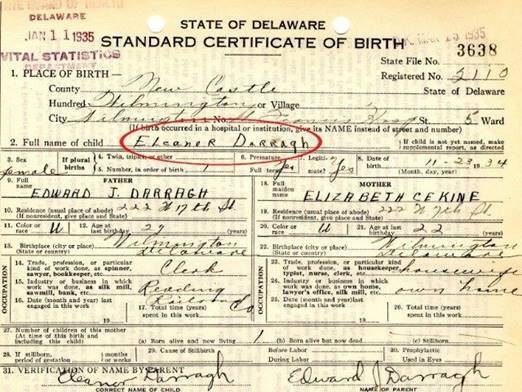 Later, Ted Cruz's own birth certificate listed his mother as "Eleanor Elizabeth Wilson." "Elizabeth" was her mother's first name, and "Wilson" is a surname from a previous marriage.

Trump was right... again! America cannot afford to have another U.S. President with divided allegiances whether by birth, with Sen. Ted Cruz, or by philosophy which after 8 years of Obama's Holocaust Democrat scorched earth politics pushing his version of anti-American exceptionalism has thoroughly perverted, deconstructed, and destroyed America's constitutional Republic from within, which is why Trump has made it his singular duty once he becomes President of the United States to "Make America Great Again."