Ellis Washington
The state of mind of a psychotic 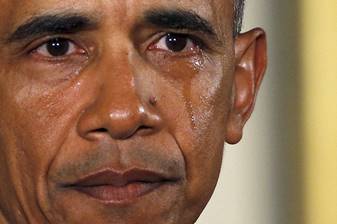 Presidential candidate Donald Trump called President Barack President Barack Obama's final State of the Union address among other things to be 'boring', 'slow' and 'lethargic'. Two more adjectives I would add to Trump's list would be 'delusional' and 'psychotic,' thus the title of this essay – The State of Mind of a Psychotic.

Obama's speech was so replete with dishonesty, psychological displacement, and lies in every sentence it was reminiscent of the aphorism regarding the Devil – Even if the Devil tells the truth, it's a lie.

Breitbart writer Joel B. Pollak wrote a very good article titled, Top Ten Lies on Obama's State of the Union. I will use this article as the basis for my review of Obama's Stalinesque SOTU speech he assaulted America with on Jan. 5, 2016.

Beginning from First Principles with a simple definition that "Psychosis is an abnormal disorder of the mind defined as a loss of contact with reality," then it is obviously follows that President Obama's SOTU speech was a case study of a truly psychotic mind. Here are Obama's 10 most psychotic lies followed by Pollak's and then my commentary:
Only a political psychotic and Socialist apparatchik like Obama raised and indoctrinated for 10 years (from age 8-18) by communist radical Frank Marshall Davies (likely his real biological father) and indoctrinated by Marxist-Progressives professors at Columbia and Harvard, could possess such a profoundly perverted understanding of history. If Obama were one of my history or law students, I would have flunked him out-of-hand. First, the idea of "democracy" was so abhorrent to the constitutional Framers that they went to war with England, the superpower of the eighteenth century, not to replace the hated monarchy with democracy, but with a Republic. "Madame, we have given you a Republic, if you can keep it," was Benjamin Franklin's retort after the Constitutional Convention in Philadelphia in Sept. 1787 in answer to a woman's inquiry: "Dr. Franklin, what have you done for us today?"

Second, to avoid the JFK's feckless foreign policy and warmongering which inexorably led the U.S. into the jaws of the Cuban Missile Crisis in October 1962. (Obama and I were barely over one-year-old). JFK's colossal ignorance of communism and foreign policy averted World War III when at the eleventh hour the U.S. made a treaty with Khrushchev's Russia to never invade Cuba if Russia took their nuclear weapons out of Cuba. Yet, to a liberal fascist like Obama, a demagogue who brags that he rules by decree, evading our treaty obligations is a little impediment for this ends/means Holocaust Democrat.

In an earlier essay regarding the psychopathy of Hillary Clinton, I quoted British medical writer Markus MacGill who defined Delusions as "beliefs that are not supported by the cultural or religious context and there is clear evidence that they are false – nevertheless, they are strong convictions that the patient believes in completely." Obama's SOTU speech is a classic case of psychosis. Psychosis is an abnormal disorder of the mind defined as a loss of contact with reality. A psychotic is therefore a person possessing this psychosis or disconnect with reality. People suffering psychosis may exhibit some personality distortions and thought disorder. Conditional to its severity is the connection to strange, bizarre, or even sociopathic conduct, in addition to difficulty with social contact and deficiency in conducting daily functions of life.

Radio talk show legend, Dr. Michael Savage went even further than my contention that Obama is a psychotic with sociopath tendencies. Dr. Savage called Obama a "psychopath" and compares his invasion of his own country to Hitler's invasion of Germany in the 1920s-40s: "Hitler was a psychopath, no one on earth would disagree with that except Nazis who still exist," he said. "What did Hitler do? He invaded other countries to impose his nation's, let us say, distorted values and race upon other countries. What is Obama doing? He's invading his own country with people of other races and other cultures and other languages to wipe away the predominant language, the predominant culture of his own nation. Barack Obama is as equally as mad as Adolf Hitler in that regard."

Hitler, notwithstanding, Germany gave the world more than the Nazis. The outstanding poet, novelist, and literary legend, Johann Wolfgang von Goethe (1749-1842), said it best regarding Jacobin Tyrants and Holocaust Democrats down through the Ages – "There is nothing more frightening than active ignorance."