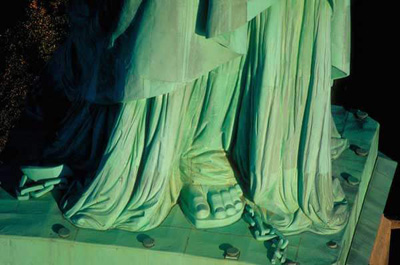 Did you know that Lady Liberty wears slave chains at her feet? However, these are the symbolic chains of slavery and tyranny broken by the inexorable power of Liberty and the Republic.

Marx: Democracy is the road to socialism.

Lenin: Democracy is indispensable to socialism – The goal of socialism is communism.

Marx: The meaning of peace is the absence of opposition to socialism.

How can Bernie Sanders (I-VT), a crusty 74-year-old admitted Socialist, who defied all expectation and tied the incumbent Hillary Clinton (50/50) in the Iowa Caucus? How can a doctrinaire Socialist (meaning Communist) have the majority of his fanatical followers be under age 35? How can Senator Bernie Sanders break all records for campaign donations in the history of presidential elections – both in the amount and in the number of individual donors?

Could it be that America is a Socialist nation?

We are all Socialists now?

Vladimir Lenin (1870-1924), leader of the Bolshevik Revolution (1917), and Russian dictator of the world's first Communist nation (the Soviet Union), said it best when he called them communist revolutionaries "useful idiots." What did Lenin mean by the phrase useful idiots? It was the legions of youth who sacrificed themselves unflinchingly by the millions to rampage, to kill, to destroy, to betray their own country for the cause of "Mother Russia" only to be rewarded for their loyalty to Socialism and Communism by being slaughtered and shipped off the gulags (prisons) in Siberia and other god forsaken places. But why? Lenin called them 'useful idiots' because these youthful true believers were ignorant of the real intent of Socialism and thus witless slaves to be manipulated where Lenin and later Stalin used them by the millions as faceless cannon fodder to help the Bolshevik Revolutionaries reach an expected end – Bring down Russia's government of Czar Nicolas II and replace "decadent" monarchy with the Communist utopia.

Breitbart writer, Patrick Howley in an article on the Socialist Bernie Sander's populist phenomenon, writes: "239,872 people turned out on the Democratic side for the 2008 caucus, in which Obama beat Clinton, compared to only 124,331 who showed up for the 2004 caucus. Sanders is not expecting Monday's caucus to match that 2008 turnout. But he said that he expects voter turnout to be high enough to give him a victory." That the legions of youth empowering the Sander's campaign in Iowa are "powered by a community of more than 30,000 progressives, focused on research, education, and advocacy." Yet many political prognosticators believe as of Monday, 3:30 CST the race was too close to call, but that Bernie Sanders has 'caught fire.' 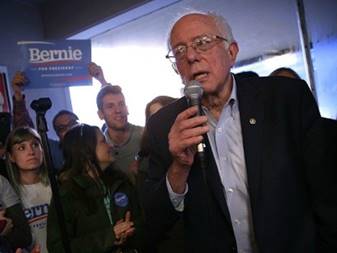 Progress Iowa executive director Matt Sinovic said of Sanders, "The Sanders campaign how now crossed the threshold of having more than fifty thousand people appear at his rallies over the course of this campaign in Iowa." This prompted Howley to query, "How will higher voter turnout benefit either Sanders or Clinton?" "I think it probably helps Bernie, but it really depends on who gets their people out," Sinovic said. "I think it's less about the number of turnout versus who shows up. If it's a lot more first-time caucus-goers, that's more Bernie. The Clinton campaign has all these institutional endorsements, and if they turn their regular folks out a lot, and get them out, then it's going to be more Clinton."

Howley further quoted Sinovic: "The conventional wisdom...it is anybody's game...the Sanders camp is going to do particularly well in college towns and the Clinton campaign is going to do well in the more rural areas." "If something changes that [college] dynamic, you could be looking at a better night for Hillary than is expected, or if Sanders does better in some rural counties, that might show that it's trending in his direction."

"At a grassroots level, you get it that people are, especially from an economic perspective, they think that the system is rigged against them. And I think that has come through," Sinovic said, noting that not all people who feel this way are necessarily in the Sanders camp. "That economic angst is going to translate into a lot of the rest of the primary campaign." The Clinton-Sanders battle is reaching fever pitch with just hours to go until the caucus.

The political Left has always lived by the evil Machiavellian axiom, "The end justifies the means." This amoral political philosophy is more than an axiom, it is an existential worldview employed by the Democrat Socialist Party who always fells compelled to unleash upon its political enemies – whether it is LBJ's "Landside of 1948" that secured his early political career in Texas: "[Writer Roger] Stone mentions "Landslide Lyndon" ascension in politics where his infamous 1948 election launching his career as a senator was obviously a stolen election in which LBJ won by only 87 votes, all in alphabetical order, in the same handwriting and they all signed in the same ink ("Box 13").

Likewise, JFK was compelled to put LBJ on the V.P ticket in 1960 and followed LBJ's Machiavellian tendencies to win at all costs where his 'king maker' father, Joe Kennedy Sr. paid Democrat union cronies to stuff ballot boxes for JFK in West Virginia and used mob boss Sam Giancana to commit rampant voter fraud in Illinois according to writer Roger Stone:


... Nixon closed fast and won the 1960 election, only to have it stolen from him. The role of organized crime and the Chicago mob in both Kennedy's earlier West Virginia Primary win and the effort to steal Illinois is undeniable. Special prosecutor Wexler's report details voter intimidation as well as thugs ferrying "ghost voters" from polling place to polling place. This, I believe, Ambassador Joseph P. Kennedy's deal with the Chicago mob, would sow the seeds for John F. Kennedy's assassination.


Howley cited Sanders campaign manager Jeff Weaver accused the Clinton campaign of "infiltrating the caucuses with out-of-state paid staffers," including a precinct captain in Hawarden, Iowa who is not a resident of the state. The rules do not prohibit using out-of-state precinct captains. "Coming from Sioux City into the Hawarden caucus and trying to influence the voters in the Hawarden caucus, I don't know what the rules are, but it certainly is irregular," a Sanders supporter told Yahoo News. Hear the entire Sanders interview here:

As systematic evidence of the Clinton dirty tricks campaign against Sanders in the Iowa Caucus mounts, on the DrudgeReport earlier this week (02/02/16) contained these incriminating headlines:
These headlines are most peculiar: Why would Bernie agree to use an App designed by pro-Obama, pro-Clinton mega-billionaire Bill Gate's Microsoft company? And... surprise, surprise, the App didn't tally the vote totals right thus allowing Hillary to 'win' by the closest margins. Remember LBJ 1948 anyone? Remember JFK 1960 anyone? Hillary won 6 precincts by a coin toss with the odds of 1 in 64 getting six in a row right? Incredulous at Hillary's Machiavellian tactics against Sanders, I heard some sports talk radio host last Tuesday flip a coin and ask his callers to guess – heads or tails? Nobody guessed right more than two times in a row.

Winston Churchill (1874-1955), the great English statesman who stared down Hitler and the Nazis, beat all the odds and won during the darkest dystopian days of World War II (1939-45). Churchill warned this generation about the evils of Socialism – "Socialism is a philosophy of failure, the creed of ignorance, and the gospel of envy, its inherent virtue is the equal sharing of misery." He also stated what we must do to fight fascism in all of its shape-shifting guises including – Democracy, Socialism, Communism, and Nazi Fascism:


We shall fight them on the beaches,

We shall fight them on the shore,

We shall fight them in the fields and streams,

We shall fight them in the city;


Seeming now like antiquity, in an essay,
The views expressed by RenewAmerica columnists are their own and do not necessarily reflect the position of RenewAmerica or its affiliates.