September 25, 2012
In a sinister twist, the so-called Mainstream Media are attempting to move the nation's attention away from the anti-U.S. rage of Muslim mobs, the flag burnings, and the assaults on U.S. overseas property to more mundane topics, especially Republican presidential candidate Mitt Romney's tax returns. Conservative news outlets — Fox News, talk radio, and Internet sites — are the sources for information on a literally incendiary situation. 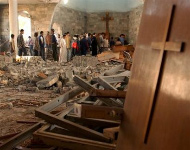 Lost, however, in the coverage, or non-coverage, is the perilous existence of tens of millions of Christians whose are dependent on the whim of the local mob.

The situation for Christians in many parts of the world is grim. Every five minutes a Christian dies for his or her faith, according to one international report.

While persecution remains horrendous in the Communist countries of North Korea, China, Vietnam, and Laos, the Muslim world is the global leader in sheer numbers of Christians killed, beaten, and churches bombed.

Persecution in Communist nations is a function of government policy. It can ebb and flow according to the dictates of some central committee. While Christians under overtly Communist regimes are periodically beaten and sometimes murdered, at the moment Christianity is regarded primarily only as an irritant and distraction from the goals of the State.

In Muslim lands, the situation is different. Islam, The Way, is the complete focus of the Muslim life. All other religions are not merely an annoyance, but an offense against the truth of God as reveled by Mohammad. Islamic teaching is clear: There is no other God but Allah, and Mohammad is His Prophet.

Interpretations on how non-Muslims are to be treated varies according to place and time. There have been periods of quiet, where non-Muslims are left in peace. Islam does teach that the "people of the Book," Christians and Jews, are to receive a degree of "toleration."

That "toleration," praised by academics in so many school and college textbooks, is in truth a grinding form of daily oppression where life and property is never secure.

In the best of times, the fate of Christians in Muslim lands is dangerous, and often depends on the level of anger of relatively small groups of fanatics. Accounts of the rape and forced marriage of Christian women, random assaults on Christian men, and the destruction of Christian churches occurred with regularity even before the current episode of uncontrollable rage. Jewish communities have been all but destroyed by this rage, it seems as though the Christians are next.

This same rage is also directed at any Moslem who wished to treat non-Moslems with simple dignity and respect.

The modern West, including the United States, is unwilling to acknowledge, let alone do anything about, the outrageous conditions of Christians in the Muslim world. 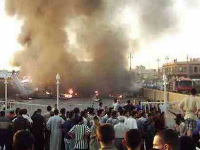 Even in Iraq, where so many U.S. service members have been wounded or killed, the basic human freedoms of life and personal safety are denied to the ancient Christian communities living there. The churches of the Catholic Chaldean rite are regularly targeted for attack and bombing, their people beaten and sometimes killed. The Iraqi government has done little to stop the violence and destruction. As a result, many in this once thriving Christian community have fled, and the Chaldean rite of the Catholic Church in Iraq is now in danger of extinction.

The mass media outlets in the U.S. have been disinterested in the plight of the Iraqi Christians. The unwillingness of the media to acknowledge the plight of Christians not only in Iraq but across the Muslim world is disgraceful.

One news outlet, however, has made an initial step.

Germany's internationally known Die Welt recently published an article which sheds some light on this situation.

Die Welt cites the statement of Commissioner for Religious Freedom of the Organization for Security and Cooperation in Europe (OSCE), Massimo Introvigne, that "every five minutes a Christian dies for his faith."

This shocking reality must become better known in the United States, and our State Department must act resolutely to relieve this abominable situation. At the moment, however, we seem incapable of even ensuring the preservation of our own ambassadors' lives.

With the fanaticism elicited by fundamentalist Islam on the rise, the plight of Christians in foreign lands will get only worse, especially since the United States reacts so weakly to the murder of its personnel and destruction of its property overseas.

There is a Christian Holocaust happening now. It is time to break the silence.