Muslim fanatics and the canary 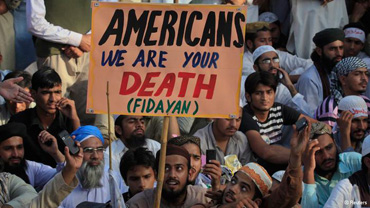 Before the advent of modern sensing devices, miners would use canaries to warn of the presence of the colorless, odorless gases which might build up inside the mine and kill without warning. When the canary stopped singing, it was time to evacuate the mine.

The mindless, vicious mayhem of Muslim extremists around the world delivers a clear warning of not only the dangers we face, but also our ability to recognize danger when confronted by it.

The Muslim fanatics are unquestionably dangerous. Currently they hold a large swath of territory taken from Syria and Iraq. Other fanatic franchises are bombing churches and kidnapping children in Africa, slaughtering journalists in Paris, and working on atomic weapons in Iran.

These twisted individuals, however, do not have aircraft carriers, submarines, state-of-the-art intercontinental ballistic missiles, nor are they planning to establish lunar colonies. Their means of attack are limited to small arms and possibly the use of a "dirty bomb" – a weapon using nuclear or biological material combined with conventional explosives. Except for the "Islamic State," terrorists have no state from which to operate. The terrorists can inflict a certain amount of human misery, but, as presently constituted, do not pose a threat to America's national existence.

We do, however, have opponents who possess sophisticated weaponry and do constitute a direct threat to the United States. These opponents are also literally aiming for the moon.

Russia and China are our opponents. We are having difficulty with this reality in much the same way that many in America cannot come to grips with the word "Muslim" or "Islamic" used with the term "terrorist." Americans are even more in denial about the national peril presented by Russia, and their allies. While blindness about the Islamic nature of terrorism resides primarily among liberals, there seems to be a general inability across the political spectrum to acknowledge that America is the main enemy of Russia and its closest friends.

TARGET OF ARMS BUILD UP

For years, Russia and China have engaged in an extensive military buildup from small arms to nuclear weapons. Intercontinental ballistic missiles with multiple independently targeted warheads, stealth jets, nuclear armed submarines, aircraft carriers, drones and even war robots are either being tested or are already operational.

Relying on the experts, America and its political elite for the next 20 or so years enjoyed a world they believed free of any hint of danger from a hostile nation state. Millions of investment dollars flowed into both Russia and China. Not only did the American business elite invest funds in China, it exported much of our manufacturing capability, which also cost millions of Americans their livelihood.

The promises and theories of the pundits and the governing elite were false from the beginning. The "new" Russia almost immediately began assisting China with all forms of military assistance, from basic training to weapons technology. Today there is even discussion between Moscow and Beijing of a joint lunar base.

America and Western Europe seemed to recognize the aggressive nature of Russia and China in 2014 when Russian troops invaded Ukraine and China threatened war against its neighbors over a chain of disputed islands in the South China Sea.

Concern about Russia and China, however, did not last long. Several months later, the success of Muslim fanatics in Syria and Iraq drew attention away from Russia and China. Mere looming threats of global disaster could not compete with images of the beheading of children.

At the beginning of 2015, the threat of attack by Muslim killers has dominated the media, completely overshadowing reports of a closer military/technical relationship between Russia and Iran.

Concrete evidence of this cooperation is that Moscow may disregard the international embargo of weapons to Iran by fulfilling its pre-embargo contract for the S-300 anti-aircraft system. The more sophisticated S-400 system may also be sent to Iran.

The presence of advanced Russian missile systems will make any attack on Iran's nuclear facilities extremely costly in lives and material. Both jet aircraft and cruise missiles are vulnerable to the Russian air defense batteries.

Russia's assistance to Iran extends to advocating for Teheran's admittance into the Shanghai Cooperation Organization (SCO), a military-political group led by Russia and China. The goal for Russia, China, Iran, and the SCO in general is to replace the strategic influence of the United States, and leave American allies vulnerable to pressure from Russia, China, and its friends, such as Iran.

The charm offensive by U.S. President Barack Obama and Pope Francis has assisted Russia in a time when it was needed. Sanctions on Russia are having a negative effect, although Putin is attempting to substitute European economic ties with commercial activity centered primarily on Asia, especially China. Cuba is and has been a continuous drain on Moscow, so the prospect of U.S. money flowing into Cuba is most welcome.

The most provocative part of the Cuban deal is that there are few restrictions on the Communist Cuban government. A boat with refugees attempting to flee the island gulag for the United States tragically demonstrated how Cuba regards the new relationship with the United States. The refugee boat was intentionally rammed by a Cuban patrol craft. The crew on the Cuban vessel watched as the boat sank and those aboard began to slip below the waves. Survivors were transported to a prison were they were interrogated. Some remained imprisoned.

The incident demonstrates graphically that the Castro regime remains a cruel, Communist tyranny determined to dominate the lives of its people.

The Obama administration confidently states that an increase in U.S. economic activity in Cuba will undermine the Cuban government. The theory is that the presence of Americans and their money will cause the Cuban people to demand more freedoms from the Communist regime. This thinking ignores the fervent desire for freedom among the Cuban people, the existence of Cuban political prisoners, and completely underestimates the capabilities of Cuban intelligence.

The Cuban secret police system is modeled on both the Soviet and East German internal spy operations. Neighbor spies on neighbor, and any suspicious activity is reported to the neighborhood secret police official.

The internal secret police system is closely connected to Cuba's world class external spy network. When an American makes plans to visit Cuba, the Cuban government launches efforts find out any information about that individual which could prove to be important, both before the individual leaves the U.S. and upon arrival in Cuba.

The information could include the visitor's likes, dislikes, weaknesses (women, men, drugs), and political disposition. If politically neutral, the individual could be turned to favoring the Cuban regime.

The Communist Cuban regime is betting that the Americans coming to Cuba can be either isolated if truly anti-Communist, or, if politically weak or uncertain, become a benefit to Havana after returning to the United States.

While United States foreign policy is seemingly in a state of hopeless confusion regarding how to handle Muslim killers, Russia is organizing a global network of anti-American allies.

In Latin America, Cuba is joined by the Communist governments of Nicaragua and Venezuela as close allies of Moscow, and they may, along with Cuba, become ports for Russian military ships and aircraft. Brazil is a member of the pro-Moscow BRICS (Brazil, Russia, India, China, South Africa) economic alliance.

A joint Russia-China naval alliance is growing in the Pacific. American allies already facing Chinese aggression will be under additional pressure.

In Europe, Russia continues to expand into eastern Ukraine, and is subtly threatening the Baltic states of Latvia, Lithuania, and Estonia wilth a similar fate, using the Russian minorities in those nations as a pretext or cover for invasion.

Russia is expanding its military presence in the Arctic, and is giving its armed forces operational experience in the region with year-round bases and military exercises. Russia is unequaled in its determination to militarize the top of the world.

Yes, the United States faces a real threat from Muslim killers. The reality, however, is that we also face larger, far more powerful forces which seek to turn America into a virtual province of Russia and/or China.

The United States should be great enough to swiftly put an end to the Muslim extremists and address other dangers. If we are unwilling to do so, our prospects for national survival are dim.

We can answers all of the challenges before us, but we need leaders who believe in the promise and greatness of America as one nation "under God."