Let's be honest: Putin is a Stalinist

February 9, 2016
While generally acknowledging some of Russian President Vladimir Putin's more negative traits – the assassination of opponents, the tendency to invade small countries, for instance – Breitbart journalist James Delingpole in a recent article made the observation that an individual is more likely to be killed by an Islamic terrorist than by one of Putin's henchmen. 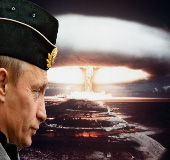 True, but it must be remembered that Putin does have bombers, nuclear armed submarines and city-killing missiles aimed at the United States.

Delingpole also recognizes that Putin "is never going to be our friend...." but "This doesn't mean ...that he shouldn't be our ally against the greatest threat facing us...the rise...of Islamic fundamentalism." The Breitbart author goes on to state that Putin is a "democratically elected president who has denounced " his country's Communist legacy."

To say that Putin is "democratically elected" completely ignores the rigged nature of Russian elections. The Breitbart author is also incorrect when he states that "Putin did what no Russian leader has done in the last 100 years by denouncing his country's Communist legacy."

Putin criticized the strategy Lenin used, not Communist ideology in general. In a clarification of his remarks concerning Lenin, Putin states that his criticism relates to the form of the Soviet state took, not to its existence. Putin briefly describes the dispute between Lenin and Josef Stalin. Lenin wanted equality between the member states of the Union of Soviet Socialist Republics (USSR), Stalin wanted the member states to have a certain "autonomy" but remain under Russian dominance.

Lenin won the debate, and his version of the Union of Soviet Socialist Republics came into existence after ratification by the Congress of Soviets on December 30, 1922.

Nowhere does Putin criticize the existence of a Communist police state. Putin cites the difference in opinion as to how the Communist state is to be organized. There is no question that it should exist.

In this respect, one can describe Putin as a Stalinist.

Regarding Putin as a "democratically elected" ruler, the Russian press reported that the "export of 'color revolutions'" is listed as one of the "threats to the security of Russia."

The movement to remove pro-Russian dictators in states of the former USSR is often termed the "color revolutions" because a selected color is used in rallies. For instance, orange was used in Ukraine, rose in the former Soviet state of Georgia. (The term was extended to pro-democracy movements in other parts of the world).

The "democratically elected" Putin fears, and rightly so, that a similar "color revolution" in Russia would topple the current Russian dictatorship with its rigged elections, media control, and, of course, murder of opponents.

So much for Putin-style "democracy."

Putin's criticism of Lenin extended to the execution of thousands of Russians. Putin also has condemned Stalin's "excesses": the extermination of millions of Soviet citizens. There is, however, an irony in these condemnations.

Putin, and those who surround him, refer to themselves as "Chekists." Indeed, all members of the Soviet or Russian espionage services are "Chekists," employing a term which comes from the acronym of the original Bolshevik secret police, the All-Russian Emergency Commission for Combating Counter-Revolution and Sabotage, which is usually abbreviated from the Russian as "Cheka." Lenin founded the Cheka shortly after the Bolsheviks overthrew Russia's Provisional government (the Tsar had abdicated several months earlier).

It was the Cheka that carried out the mass killings of anyone thought to oppose the Bolsheviks. The Cheka was reorganized and renamed throughout Soviet history, but Chekists still hunted down and imprisoned millions. Under Lenin's successor, Stalin, millions died at the hands of what was popularly known as the NKVD, a later Chekist incarnation. Under Stalin, the USSR expanded the duties of the NKVD in the subversion of the West which had already begin by Lenin. Target nations included the United States.

Following Stalin's death, Soviet intelligence would be known by its most infamous acronym, KGB. After the collapse of the USSR, the KGB was divided into two separate organizations, the SVR, which concentrated on external espionage, and the FSB, which handled spying within the Russian state.

Through all the reorganizations and name changes, every Soviet/Russian intelligence officer proudly called himself (or herself) a Chekist.

Any objections Putin might have to the mayhem caused by Lenin's and Stalin's actions would be strategic – the body count was too high, too messy, too embarrassing. Putin's own use of murder indicates that he has no problem with killing his opponents, but that he is able to avoid mass slaughter by pinpointing for elimination the most important and troublesome individuals, and thereby resolving political difficulties more neatly.

Delignpole makes the wishful assertion that Putin could be a valuable ally in the struggle against Islamic extremism. One can simply note the tendency for Russian jets to ignore ISIS targets in favor of bombing anti-Assad rebels supported by the United States to see where Moscow's real interest lies. Moscow is more interested in saving the Assad regime than destroying terrorism. Putin's intension is to maintain Moscow's influence in Syria in order to preserve Russia's small naval facility at Tartus which is slated for a later and important expansion. Putin has plans for his navy in the Mediterranean.

Russia's selective approach to terrorism is best seen in Moscow's relationship with the Islamic Republic of Iran. For years, Moscow has had a very close working relationship with Iran, which is an active supporter of several vicious Muslim terrorist groups. Moscow, however, is quite public about its support of Iran. According to one top Russian official, Iran is a "natural partner for Russia." Iran's terror allies apparently have a share in this "natural" partnership: Russian special forces (Spetsnaz) have been reported to be aiding pro-Iranian fighters, including the bloody Hezbollah organization.

The "natural" Russian-Iranian partnership includes the Putin government providing Iran with nuclear and ballistic missile technology, as well as the formidable S-300 anti-aircraft system. Any attempt to end the threat of Iran's nuclear capability becomes possibly very costly in lives and material with the installation of the S-300s.

Thus, Moscow is not dependable ally against terrorism, and is, in reality, one of the supporters of terror, at least terror directed against the United States and its allies.

Delignpole, however, is right on target in one vital aspect: he is absolutely correct when he says that Putin will never be our friend. This is a truth which many Americans still need to grasp, including a number of those with a conservative bent.