Russia's propaganda war against the United States: the Russian perspective

April 29, 2016
Although there are predictions of the coming collapse of the Putin government, remarks by an influential Russian government official on an official Russian news site, RIA Novosti, indicate that the Moscow elite is united in its efforts to influence the people of the United States to act in a manner hostile to the interests of America and in favor of Moscow. 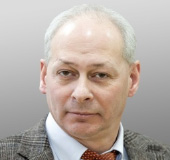 Alexey Volin, the Deputy Minister for Mass Communications oversees the activities of the Russian media, informed the RIA Novosti audience that the Russian government has built a "multimedia complex" capable providing an "alternative view" to the "political correctness" in the United States and Great Britain.

In a well-calculated tour d'force Volin and his Kremlin associates are positioning Russian propaganda, which is all-but-Communist, as an alternative to U.S. home grown media Leftist "political correctness," giving Moscow's propaganda something of an underdog status.

Volin observed that Socialism dominates Europe and a "large part" of the United States, and described the level of politically correct censorship in the West as going beyond that dreamt of by the now defunct Communist Party of the Soviet Union and at present stands comparable to North Korean censorship.

While "political correctness" in the U.S. does dominate the mass media outlets, so far no one has been imprisoned or executed for disagreeing with official government pronouncements as happened in the former USSR or present-day North Korea.

Although comfortably on the Marxist end of the political spectrum, Volin states that Moscow's "alternative view" is appealing to the "right" in the U.S. and Europe.

Volin asserts that, because of Russia's "free market" and "democratic" political system, "We have completely changed places with out partners," and that Russia now resembles politically and socially the era of 1950s more than the U.S. or Europe presently does.

To call Volin's statements a breathtaking misrepresentation of reality is a gross understatement. True, there is no doubt that a pernicious "political correctness" dominates the media and much of politics in the United States and even more so in Europe. A battle is on within the United States between conservatives and oppressive "liberal" statists, a battle which Europe seems to have already lost in many respects. To see the Russian Federation as the savior of the "right," however, is to be blind to the cold realities of the de facto police state operated by Russia's political elite.

The Russian state certainly is not a bastion of freedom, as the periodic assassination of opposition journalists and political figures testifies. Elections are rigged, and the "free market" is controlled by individuals who are not only connected with the government, but usually also active in or veterans of the state internal or external espionage system.

Volin himself is a good example of both present-day media control in Russia as well as a direct link to the former Soviet Union, a defunct entity he obviously holds in high regard, if not in outright reverence.

In 1986, several years before the collapse of the Soviet Union, Volin joined the Soviet news agency APN following graduation from Moscow State University. Volin eventually was named by Russian president Vladimir Putin as Deputy Minister of Mass Communications, which carefully oversees the activities of the Russian media.

For Volin, history is repeating itself: like today's despotic Russian Federation, the Soviet Union also declared itself to be democratic, although proudly Communist. It would not be going too far to say that in today's Russia, especially among the elites, there is a deep desire – in reality an adamant determination – to shed any pretense of a free market and firmly declare the return of Communism.

One of Volin's most revealing statements is, to those who lived through the Cold War (first Cold War, first phase of the Cold War, whatever you want to call it), also one of his strangest.

In response to the interviewer's question as to why Soviet citizens listened to the Voice of America or the BBC, Volin responded that it was because "a different view on the developments in their country is always somewhat interesting to people."

During the Soviet era, listening to the Voice of America, as well as Radio Free Europe and Radio Liberty, was a crime. Soviet citizens listened to these broadcasts, taking chances of running afoul of the secret police, because they knew their government was lying to them, and one of the liars was Alexey Volin.

As we have commented earlier , the Moscow propaganda machine is achieving some success in reaching conservatives in the U.S., as well as in Europe. Even in the upper strata of the Republican Party, there are those with close political ties to the Moscow elite and its friends.

All Americans need to take a realistic look at today's Russia. Whoever does will find a nation run by a government which is actively changing the past regarding the horrors of the Soviet Union, is in a de facto military alliance with the Peoples Republic of China against the United States, and increasingly resembles in its oppressive and aggressive behavior the old, collapsed but still longed for, Soviet Union.