August 7, 2011
The debt extension, the downgrade in America's credit rating, and the festering Marxofascist empire called the European Union are pushing what we have tended to call "Western Civilization" past its economic tipping point. 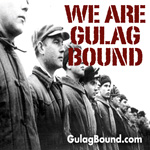 (Italy is now said to be under attack not unlike Soros attacked Great Britain about 19 years ago. It is said their banks have been fine, but it is their overburdened government that is rocking Europe now. What a surprise, to some.)

The central bank financiers and governments of the world's more powerful nations may yet find ways to extend our mutual insolvency bubble, to avoid an immediate catastrophe, but those moves tend to make the bubble burst bigger and harder, later.

Readers of the Bound may understand this is being intentionally done to America. I suppose we will write articles reminding of that, citing the evidence yet again. But those who have understood what is featured here and elsewhere, about what we can by now call the Marx — Gramsci — Trotsky — Alinsky — Rothschild(s) — Strong — Cloward — Piven — Ayers — Dohrn — Soros — Pelosi — Obama plan for tearing down our free nation's underpinnings, know — not that there are not many other names to be applied to that long, hyphenated, and satanic monstrosity.

Personally, I have believed it likely that those who are sabotaging our livelihoods have wanted our economic collapse to occur in the next presidential administration, likely under a globalist GOP president. But it may all be folding before they can get that far. I believe the Marxist/fascist/corrupt-financier complex will focus all the harder now, upon assuring the GOP gets that globalist traitor as its presidential nominee (and an Obama presidency, or a replacement Democratic president is just an unlikely Plan-B).

With its Quisling Republican in the White House, as I am compelled to believe they intend, a failing state of America can be provided a much better "capitalist" administration as a target for a much more destructive proletariat rebellion. And that Republican president must be one who will look to globalist initiatives, from the U.N., a revised, communitarian central banking replacement of what we have known as the corrupt IMF and World Bank, etc. America will be "to big to fail" and the bailout will be offered with global governance (and new international currency) locked in. Welcome to the controlled world, Gulag America.

It is our mission to assure this does not happen. We must find a Republican (or if necessary, a third party) presidential candidate, as well as Congressional and state candidates, who will tell compatriots still in "The Matrix" what is really going on and who will stand foremost for our American Sovereignties. After all, whether or not one can say the U.S.A. is constitutionally governed at this point, the People live (or die) by the Declaration of Independence and all its principles, or it ceases to be authentic America.

So, let us praise the Lord, pass the ammunition of the truth, wrest the Tea Parties away from their conniving, transnationalist controllers, and seize the moment!

It is time to begin to really live free, even as we watch much of America die.