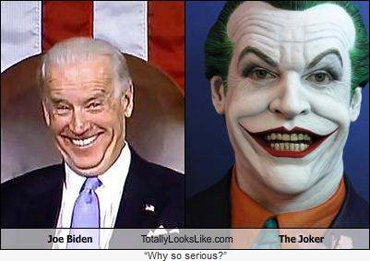 Attorney (self-prosecutor) that he is, The Joker summed it up at the end.


Well let me tell ya. My record stands for itself. I never say anything I don't mean. Everybody knows, whatever I say, I do. And, uh, my whole life has been devoted to leveling the playing field for middle class people, giving them an even break.


He then spoke of people being given "a shot," but I don't think he was referring to The "Middle Class" Drinking Game.

So, per Biden, egalitarianism, that is, government dispensing enforced fairness, is the essence of his political philosophy. And so, he really is something of a communist, the essential slogan of which is:

- Marx, from his Critique of the Gotha Program


Then he repeated his reference to draconian landscaping twice, in his closing comment. Maybe that was because the audience had been admonished not to gasp (slide on over to about 1:26:40).

That leveling, by incremental degree is also fundamental to Fabianist socialism, Trotskyite democracy, and Gramsci's and Alinsky's doctrines of stealthy governmental and NGO power and hegemony. It is the core of the global Agenda 21 program being implemented in our neighborhoods, via these doctrines (a program implemented for the United States in part via Barack Obama's Executive Orders and EPA policies, as well as having been testbed implemented in Massachusetts by Mitt Romney, just as he testbed implemented the insurance and abortifacient mandates of RomneyCare/ObamaCare).

And now, as if according to a script, Heroine America is faced with the Marxist monster of Obama-Biden at re-election time, causing her to flee into the arms of proffered heroes, Romney-Ryan, for her rescue — each side having been financed by the central banker and crony system that has financed Agenda 21 and related means of global, kleptocratic authoritarianism. It all seems like the Marxist or Fascist Game constantly being played in Europe and South America, for those continents' victimized voters.

Has anyone asked Mitt Romney, or Paul Ryan for that matter, about Agenda 21?

There is still time.


And as for Joe Biden, as this masterpiece by TheMouthPeace still shows and at his expense, we were warned about Obama-Biden's intent upon structural Marxism, before the last General Election. It is well worth a replay — the video that is, not the election.

Video, "The Biden Chronicles: Anatomy Of The Village Blowhard!"