Do Republicans need to listen to more libertarian-oriented millennials? Definitely. Everyone who makes sense needs to listen to everyone else who does. 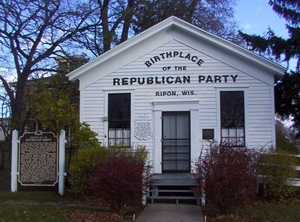 But have libertarians learned something new, missing in America's founding and history, something ignored by our founders, or for that matter those original Republicans who met in thatlittle white schoolhouse in Ripon, Wisconsin in 1854? If you see what those truths are, please tell me. All ears, as Perot would say.

There's no doubt that Republican politicos and bosses must reorient or be retired from participation with Democrats in the massive assaults upon American liberty that have accumulated since our inception, since the Woodrow Wilson days, and now crescendoing into the 21st Century. But liberty requires sovereignty – and our mutual sovereignty requires mutual accountability. That's what government is all about.

True freedom doesn't come via the path of simply allowing raw human nature to take its course, but by getting out of the way of morally responsible human nature, Lincoln's "better angels." Perhaps Lincoln was making reference to the most famous passage of the most noted of the Federalist Papers, credited to James Madison. As Madison spoke of the separation of powers, he also referred to the necessity of adequately controlled government in the first place:


Ambition must be made to counteract ambition. The interest of the man must be connected with the constitutional rights of the place. It may be a reflection on human nature, that such devices should be necessary to control the abuses of government. But what is government itself, but the greatest of all reflections on human nature? If men were angels, no government would be necessary. If angels were to govern men, neither external nor internal controls on government would be necessary. In framing a government which is to be administered by men over men, the great difficulty lies in this: you must first enable the government to control the governed; and in the next place oblige it to control itself. A dependence on the people is, no doubt, the primary control on the government; but experience has taught mankind the necessity of auxiliary precautions.


There is such a thing as "good government" and while that is minimal by nature, government is an art of weighing by scales, not of leveraging reality to move it into ideals seated only in imaginations, whether to the "left" or the "right."

In The Heartland Institute's Donald Kendal does a fine job of calling for Republicans to pay attention to Libertarians Partiers, Ron Paul supporters, and their political allies: 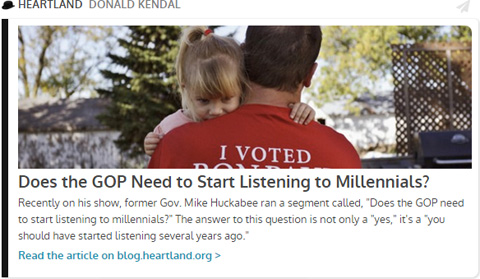 His article in turn, features this very laudable discussion between Mike Huckabee and millennials, to make the point of the need for elders to learn from younger adults:

My reply to Mr. Kendal and highly prized allies at Heartland:

Thank you. It becomes very apparent that patriots need to remedially train both Republicans and Libertarians, of all ages. Perhaps even Democrats if they will listen.


Americans need to re-learn and be re-taught authentic America, with The People as popular sovereigns under God, in charge of our servants in government, jealously maintaining state and national sovereignty to guard this, as charged us in the Declaration. We hope to do our part in The Sovereignty Campaign (http://SovCam.org).

Whatever the various deviations from this, including the libertarianism previously attempted in the tragic days of Rousseau, Voltaire (and Robespierre) the end result is always despotism and tyranny. The same will be true of standardless, unaccountable, and borderless Libertarianism, if left cloistered to its own more extreme ideology.