November 3, 2014
Columnist Michael Goodwin, admittedly a registered Democrat, distinctly makes the case to vote GOP for American voters of at least limited vision. His entire New York Post commentary, published this Sunday morning, just before the General Elections of 2014, is recommended. Here is much of it.


The extraordinary pile-up of crises has turned the usual White House blame game into something more lethal: a shootout in a lifeboat. The presidency is sinking, but we are expected to believe that only the president is blameless.

It won't wash. The problems cannot be fixed by firing one or two members of the president's team, or all of them. Something else, something more fundamental, is happening.

We are witnessing the total collapse of a bad idea. Obamaism, a quasi-socialist commitment to a more powerful government at home and an abdication of American leadership around the world, is being exposed as a historic calamity. It is fueling domestic fear and global disorder and may well lead to a world war.

If there is a smidgen of a silver lining, it is that the unraveling, complete with Obama's shameless attempts to duck responsibility, is playing out on the eve of the midterm elections. Fortunately, voters seem ready to respond by giving Republicans control of both houses of congress.

I second that emotion, and not just because Obama is a failure. For all his narcissism, he didn't make this mess alone.

He was aided and abetted by every Democrat in Congress. They marched in lockstep with his cockamamie policies, from ObamaCare to open borders. They protected corrupt leaders in numerous federal agencies, from the IRS to the Genera Services Administration. They stymied efforts to find the truth about Benghazi and the Fast and Furious gunrunning debacle.

They ceded their constitutional obligations and allowed Obama to crash the system of checks and balances. The vast majority stood silent while he gutted the military and abandoned our allies, including Israel, Egypt and Saudi Arabia, and courted Iran, the most menacing nation on earth.

With painfully few exceptions, Democrats put their loyalty to him above their duty to America.

And now they must be punished. All of them.


"This is a national emergency," the crier calls, "and the only responsible action is to vote Republican for every federal office."

Sadly, even this essay fails to deliver comprehension of the depths and extents of our emergency. No mention is made of the global, imperialist tyranny at work against our freedom, nor the leviathan tentacles of that beast, including but not limited to:
Left unaddressed are many direct violations of not only right of property and our overall liberty, but of the very right to life of astoundingly so many, in state condoned, even taxpayer fed abortion on demand throughout gestation.

The broad brushing required, this general election is not necessarily a pleasant scenario for those who would prefer much better choices, plural, on the ballot. Neither is it the most propitious for the Sovereignty Campaign's nascent work of adding new authenticity to the process. But we will continue to demonstrate individual candidates' electoral advantages and their all too common disadvantages, for the pressing of America's governing principle: each citizen's sovereignty under God, with state then national sovereignty to guard it, to protect our natural rights.

This general election's state of urgency underscores that what we are doing now must prepare for a much better effect in the party nominating season, next election cycle – much better than the very unfriendly historic trend, as indicated by this result, borrowed from the term limits movement: 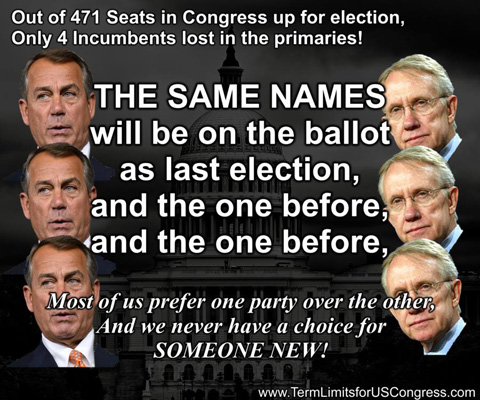 That is why we must continue to demonstrate the gaps that exist in the process, through and well after our general elections. We are digging into existing conservative and libertarian candidate surveys, to show what they do and do not effectively address, or address at all. Findings will be reported, hand to the plow.

Churning through that data will not only show where elected officials are not being measured well, by some of their key criteria for office, but also not informed of them. Then, in harmony with the patriotic efforts of others, we must fill those essential gaps, adding to a more powerful popular sovereignty applying coalition, ground continuing to be gained with no time to spare. An infantry with gaps in the line is easily defeated. A broad phalanx is not.


Sparing even a favorite Democrat or two could allow Obama to spin defeat as a minor loss. Most worrisome, if Dems keep the Senate, the election will further entrench a corrupt government and further erode America's strength and influence.

That is not a chance worth taking. Six years is enough. Collective punishment is the appropriate answer.

If there were any doubts the Obama Democrats cannot be trusted, look at their scurrilous campaigns. From coast to coast, their message is uniformly odious: Republicans are waging a "war on women" and they are racists.

That's it. They can't defend the legislation they passed, the economy they produced or the foreign policy they supported. Most don't want to be seen with Obama, yet they take the money he raises and follow his lead in exploiting race and gender fault lines.

Scraping the bottom of the rancid barrel, they prove they will do anything to hold on to power. They cannot be allowed to succeed.

It is time for them to go.


And always now – before and after office holders are again elected, is time to keep coming to the office ourselves, getting The People's authentic work done. In this particular election there is so little to gain, yet so much to continue to lose. Let us keep our stride and upend the emergency trend.