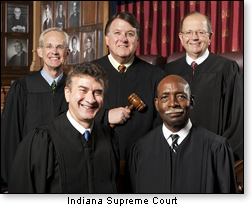 The recent Indiana Supreme Court ruling against the U.S. Constitution — rendering the Fourth Amendment null and void in that state by terminating citizens' right to resist illegal police entry into their homes — is only the latest unconscionable step in a series of actions designed to unravel each and every portion of the Bill of Rights.

The ruling by Indiana's patently leftist court is designed to complement and enhance the already jack-booted Obama police-state march into America's states, cities, and homes.

At the rate we're going, U.S. citizens will soon have no rights whatsoever — unless the rights are doled out by the USSA Meneur or Commandant du jour. Currently, that would be the Obama/Soros syndicate, which is now acting as our nation's Dictator-and-Agitator-in-Chief.

Reaping the whirlwind of our neglect

I and other observers began warning of the dissolution of our liberties and our nation years ago, as today's deeply-threatening trends were just becoming apparent. With respect (and I use that word very gingerly) to Obama, I wrote my first no-holds-barred warning piece ("Is the USA Ready for an American Stalin?") in October 2008. Tragically for our once-great nation and We-the-People, the "sheeple" who refused to vet Obama on any level whatsoever ignored the disturbing red flags all around the man and voted him into office anyway.

As long as is possible, I will continue to warn that We-the-People must continue to vote together as bloc in unprecedented, massive numbers to counteract the voter fraud, intimidation, and outright ballot stuffing that are second nature to all leftists.

Due to the 2008 fiasco of electing an individual who is still ineligible to run for president of the United States (the latest Obama "birth certificate" has been objectively proven a forgery), we are now fighting for our very lives and reaping the whirlwind of our lack of attention to our own survival. If we continue on our present course — as we can expect the media to do in its own pernicious way — we will no longer exist and will eventually become only a footnote in history, one telling of a foolish people who had the means to do so but ultimately refused to save themselves.

While campaigning in 2008, then-Senator (for a few months) Barack Hussein Obama told an adoring world that he was for high gasoline prices for all Americans, but was mildly concerned about how fast they would rise. Then-candidate for president (who was and remains unvetted by the press, Democrats, and RINOs) Obama said, smiling, that his energy plan would "necessarily cause prices to skyrocket."

During that presidential campaign, the Democrats demanded that McCain prove he was a Natural Born Citizen. He did. But when Obama was asked to do the same thing, the Harpies' media began in earnest their disinformation and misdirection campaign of calling "racist" any and all who asked Obama to prove his eligibility, and they haven't yet let up on that tactic. We can now assume that any person born anywhere in the world (no matter their ethnicity) can run for president of the United States and "the U.S. Constitution be damned." And...it is being damned. 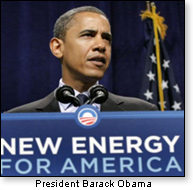 Thus far, Obama's plans against the American people for skyrocketing prices is working well. Gas prices have gone through the roof, with some car rental agencies charging $9.00/gal. and the national average wavering between $3.89-over $4.00/gal. The rising price of gas has also driven up prices on food, clothing, and general merchandise. It's now more expensive to produce and ship them.

But Obama — like all leftists who want to destroy freedom and rule over their dependent subjects — will still not allow significantly increased drilling for oil in the USA. Instead, he and his mentor George Soros are pushing Brazil's oil drilling programs — and even helping to finance them while summarily continuing to gut the American economy!

By the way, did you know Soros is heavily invested in Brazil? The media — who support Marxist-Leninist Obama at probably close to 99% — barely report anything about the demise of America — ignoring the increasing plight of the American people. The media have long been collaborators with leftist rulers, but their fawning over Obama — and their disregard for the elimination of human resources and liberty under Obama — is unprecedented.

As one of the first U.S. states to pass a police-state bill, Massachusetts has a reputation as "all Communist all the time." Passing its Storm-Trooper bill (aka Massachusetts' "Pandemic Act of 2009" — st02028) under the guise of some pandemic or any to be determined "suspicious event," the state requires — on line 240 — "a fine of $1,000 against anyone who should have reported the above [event]." Then, on lines 351-360 of Section 95, the bill states that whenever the appropriate authorities determine there is a "disease or condition dangerous to the public health," the "owner or occupier of the premises" MUST permit entry and "the investigation of the premises" and "a reported disease or health condition — or suspicious event — [and] advise that he or she shall immediately notify the State Police." No Fourth Amendment rights for Massachusetts. And I ask what is this "suspicious event" that needs to be reported or investigated?

As in Third-World countries, Tennessee police officers now openly and brazenly — as did the highwaymen of old — shake down out-of-state drivers for their money. And no one in authority even tries to stop them? 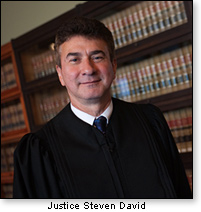 In the aforementioned Indiana case, Justice Steven David, attempting to justify his position of eliminating the Fourth Amendment from Indiana, wrote almost incomprehensibly: "We believe ... a right to resist an unlawful police entry into a home is against public policy and is incompatible with modern Fourth Amendment jurisprudence."

David said, "We also find that allowing resistance unnecessarily escalates the level of violence and therefore the risk of injuries to all parties involved without preventing the arrest."

Resisting unlawful police entry into one's own home is "against public policy and is incompatible with modern Fourth Amendment jurisprudence?" What are these Indiana Supreme Court "justices" smoking? Are these "justices" insane, or simply following the dictates of their interim master, Obama? Their decision not only eliminates a U.S. citizen's right to protection — under the law — from illegal search and seizure by the government, but effectively dissolves the 1215 Magna Carta! On top of all of this, we still have the TSA that is also performing illegal and patently pornographic searches on our bodies and the bodies of our children.

We are in dire trouble, America. The dangers in which we find ourselves wallowing are the things our founders warned against and anticipated and planned for with our Constitution and its Bill of Rights. The problem we face, however, is that we are being summarily decimated from within. Thus far, not one leader — and certainly no potential candidate for president — has come forth to actively support the Constitution of the United States of America. Instead, the RINO-run House of Representatives and Marxist-run (with establishment RINO support) Senate continue to ignore our founding documents in favor of their own desires and our wallets.

The question before us is: Are we ever going to fight back — as our Declaration of Independence says is increasingly our right when all reasonable forms of redress are denied us — or are we willing to live under tyranny and go back to being sheep? At this juncture, the Obama Syndicate's tyranny appears to be winning, and one thing is certain: We-the-People are not.

"A double minded man is unstable in all his ways" — James 1:8