Stanley Zir
The Democratic Party, the tragedy of Dodo

September 4, 2012
A week before the November 2008 election I penned "The Democratic Party, the Tragedy of Dodo." Since then Obama's quest to to strip America of her identity and remake America in his own image has reached that transformational moment 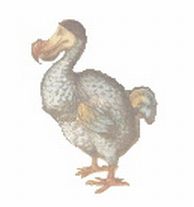 At present, both major parties of the American electorate are feverishly working to win the 2008 Presidential elections.

The Democratic National Committee is joined at the hip with the United Nations and the European Union, who believe the true way to avert war is appeasing the Islamic religious totalitarian nations of the Middle East through the promotion of new-age dialogues for peace.

The DNC Chairman, "Howling" Howie Dean, has indited the Republican party as a party of greed and racism, claiming they are the root cause of pay inequality between middle class and the rich.

According to Dean the ruthless tyrannies of the world are exonerated from any culpability. He views them as the hapless victims of Western militarism and exploitation of the big business honchos of the Republican Party.

Furthermore, Obama and his Daily Cos, Move On, Yes We Can Espirt de Cour are demanding America's domestic policy contain hand outs in order to transition into fair and equitable society, has caught them with their pants down.

Their Down with Wall Street, Up with Main Street through the infusion of Fidel Castro Municipal Bonds is exposing them as evolutionary misfits, that fit to a tee the description of the dodo birds of Mauritius Islands .

The Mauritius Dodo (Raphus cucullatus), more commonly just Dodo, was a metre-high, flightless bird of the island of Mauritius, which lived on fruit and nested on the ground.

The breast structure was insufficient to have ever supported flight and it is believed these ground-bound birds evolved to take advantage of an island ecology with no enemies.

The Dodo's stubby wings and heavy, ungainly body tell us that the bird was flightless. Scientists believe that the Dodo evolved from a bird capable of flight into a flightless one.

When an ancestor of the Dodo landed on Mauritius, it found a habitat with plenty of food and no predators. It therefore did not need to fly, and, as flying takes a great deal of energy, it was more efficient for the bird to remain on the ground. Eventually, the flightless Dodo evolved.

When other animals that had not existed on the island before found their way there, including pigs and rats, they plundered the Dodo nests where they made their home.

Scientists at the American Museum of Natural History and other institutions around the world continue to study and document the impact of human activities on the environment. It is hoped that the lesson of the Dodo can help prevent similar extinctions, and aid us in preserving the diversity of life on earth.

Although rumors of the survival of this modern day Dodo are were still emerging after the fall of Russia and the Berlin Wall there was no proof that these evolutionary misfits still existed.

On August 28th, 2008, that myth was dispelled as seventy thousand new aged Dodos descended on Denver Colorado to pay homage to Obama their Dodo master. Someone please call the Museum of Natural History — this is truly an historical event.

The Democrat National Party featured Islamic "Jumah" prayers for two hours on the Friday prior to its convention, though they denied a Catholic cardinal's request. There is a saying a small piece of fodder turns a sumptuous soup into a retched concoction, which is exactly what has happened to this convention. The leaders of this Islamic prayer event are Jibril Hough and Imam Siraj Wahhaj. These individuals embrace Islamist supremacy and have demonstrated support for radical ideologies.

Those who think we can put the fate of our country in the hands this party after what happened on 9/11 should think again. The Democrat Party is no longer a suitable political vehicle to represent American people, nor should they be holding a convention to put forth a candidate for the position of the President of the United States of America.

This week Obama brings his blame and shame brigade to Charlotte. There his cohorts will turn on former President George W. Bush, big business and the Republican party as the cause of the five trillion debt, loss of jobs, a broken Congress, racial disunity and hatred for America around the world.

Then when they are finished trashing the Republicans they will the sound a clarion call for four more years to finish the job of transforming America into a new and fair, equitable society. A society Obama claims will serve the American middle class, who will soon discover that they will be devoured by this wolf in sheep's clothing. Thus making Obama the envy of every dictator in history who has set out to rule the world.

Bring on the clowns should be on the marquee of the DNC Charlotte convention. Talking about repeating the past, especially with Bill "Slick Willy" Clinton as the keynote speaker. Remember it was his Monica Lewinsky antics among others, that lead to acceptance of non-judgmental values that infected our culture our youth and tricked down to form his foreign policy. Clinton's "no one is perfect doctrine," embraces even terrorists, who wish to destroy the people of Israel is what led to his doctrine of equal culpability.

Following Bill Clinton's speech, a very long list of radicals will take the podium, and bringing up the rear is the infamous Jimmy Carter and his Montezuma Revenge Brigade. Talk about a blast from the past.

Jimmy Carter? Is this some sort of a joke? Congressman Trent Franks said it best,

"For almost 4 years, we have witnessed the same sort of weakness, naiveté, vacillation, ambiguity and delusional policy toward radical jihadists in Iran that allowed them to hold 56 American hostages for 444 days during the Carter Administration. That failed approach now saturates nearly every policy corner of he Obama Administration as Iran seeks to gain."

America's historical struggle to gain peace through strength had no value to the Democrats under Carter, and now Obama it has become a shredded doctrine. Obama, like Carter, fashions himself as Gandhi, a modern day Martin Luther King, anyone but the leader of the free world.

Obama needs a good old fashion beat-down just like the one Reagan gave Carter in order to restore honor to our nation. Reagan stood up for a strong nation. Reagan wanted partnerships but not with tyrannies. He wanted to end tyranny. The mission of America, its entire reasons for existence, is to establish, support, and defend freedom. Only then can we keep our free market system alive, stay out of debt, and bring about the peaceful co — existence between all nations

It has been said in boxing the champion always says to the challenger "Bring it On. " I say to the Democrats and their fakata convention "bring in the clowns," Americans and Israelis need a good laugh.