Stanley Zir
Time to separate the wheat from the chaff

October 7, 2014
When are we going to get it? We cannot wait to hear, we should have, and we could have! November 24 is around the corner when the deal will be sealed by the P5+1 with Iran and she will be able to run out the clock. A theocracy that promotes a caliphate must never have access to nuclear power. It is time to separate the wheat from the chaff. The Iranian Nuclear Holocaust War Machine must be destroyed NOW!

If they will only declare that America's top priority must the immediate destruction of the Iranian nuclear holocaust war machine, then we can stop Iran in time 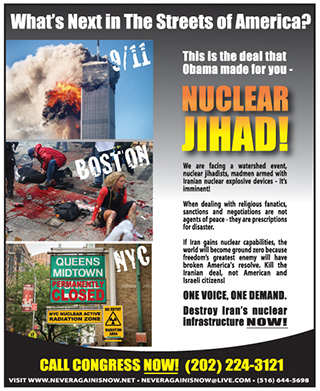 Collectively they command the attention of millions of followers. On their recommendation to their supporters, they have the power to unleash millions of calls to Washington that can end the Iranian threat.

Send the Luminaries and Organizations above this urgent message:
Commentary

For years I have been touting that we cannot reply on Congress to stop Iran because they are too wrapped up with re-election issues, private deal makings and job security. Therefore pro-Zionist organizations and pundits sole focus should be preventing a Nuclear Iran.

Their collective voices have the power to stop the President from making a permanent and fatal deal with Iran by overwhelming the President and Congress with the DEMAND that the Iranian Nuclear Holocaust Machine must be destroyed now, but no such campaign has ever emerged.

We must never permit those who wish to end our freedoms determine our fate. If our enemies are proud to announce their intent to replace our Constitutional democratic Republic with their own brand of nation building, called Islamic and secular tyranny, then why aren't we more proud to put them out of business?

With our liberties in the balance, we cannot afford to embrace the wrong strategy lest we find ourselves on the wrong battlefield where the war of victory for freedom and democracy over global tyranny is now being waged.

If Iran retains any nuclear capabilities there will there be no safe haven in the world, for who will keep the lamp of liberty lit once America's stance against the advancement of global tyranny has been quashed.

Rabbi Dr. Bernhard Rosenberg states, "Throughout history horrible atrocities including cutting off heads has been committed. This is not something we have never seen. ISIS is a diversion. Iran is our major threat, remember the NAZIS and never forget."

We can survive any threats we now face from the Islamo-fascist and secular barbarians but one – America, Israel and the free world cannot survive a Nuclear Armed Iran once it's created. A global Nuclear Holocaust is the ultimate nightmare, nuclear Jihad is the ultimate threat to our survival, and Iran is constructing this ultimate killing machine.

Time has run out, we must start immediately. It no longer matters what people think, or what our president intends to do, it is what we have to do to save our country, Israel, and Western civilization. The gloves must come off, no one is exempt. If those leading us fail to stand up now, and demand the destruction of the Iran Nuclear Holocaust War machine, we must unmercifully expose their position for they will lead us and future generations down the path to hell.

While many political groups and religious organizations are finally awakening from their silent cocoons and focusing on Iran, yet they refuse to demand that Congress take military action. Are they unaware they are complicit in helping Iran run out the clock? When facing the lethal combination of Religious Fascism and Nuclear Jihad, hand-slapping sanctions are useless, it is only unconditional victory through military actions that will overtake them.

Therefore any rallies or campaigns that are held with politicians and pro-Zionist and Christian leaders, who fail to make the demand of military force but call only for further useless sanctions, are promoting a death knoll. Although well intended beating our chest in public about the hatred that has been unleased towards Israel and the Jewish people while continually ignoring the Iranian threat, will not achieve the goal of protecting Israel and America, the country of our birth.

So far only Elie Wiesel, Michelle Bachmann, and Lou Dobbs are demanding America take military action. These people and those of their ilk are the only ones now qualified to be invited to speak at our rallies and become spokes people for our campaigns, if we are to stop Iran.

The mission of the Never Again is Now Coalition is bringing about the immediate end of the nuclear Iranian terrorist treat. Our government leadership, from the President down the entire line, responds only when there is an outrage and uproar from the masses of people. They are not governing with any strategic plan, but by reaction to the People's cry. Let's use that weakness to make them sit up and take notice.

It is my great hope that you will follow and support the guideline that we have presented in this communication. This guideline identifies the steps we must take to create the great awaking that must occur if we are to stop Iran in time.

Stanley Zir and Rabbi Rosenberg are actively promoting this campaign that will end the Iranian nuclear threat. "We speak on behalf of the six million holocaust victims who no longer have a voice."

A nuclear Iran is a prescription for worldwide genocide. Demand the destruction of Iran's Nuclear Holocaust War Machine and her strike back capabilities Now!