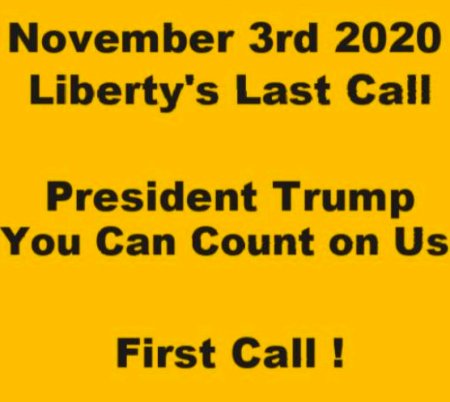 The Voice of Liberty, like the Voice from God, once heard, cannot go unanswered” – Stanley Zir@.

The Bell of Liberty is ringing again just as it did some two hundred years ago. The final episode is now being written in the archives of world history. This is the final step that humanity must take to secure the survival of the human race and protect our sacred covenant of freedom from those who threaten, deceive and betray it.

That is why the Trump Keep America Free rallies across our nation must continue without missing a single beat. In fact, the rallies must get larger. Of course, it goes without saying, that foremost, we pray for President and Mrs. Trump’s quick recovery and Vice President Pence’s continued health.

While President Trump is recovering, it is time to call upon Vice President Pence, who is an eloquent and inspirational speaker, to continue to hold massive motivational rallies and keep our quest alive. There is no doubt, in my mind, that God has put Pence here to keep up the fight. We need him to step up. There is too much at stake.

Donations must triple. The billionaires and millionaires in our party have to pledge their support in meaningful dollars. It’s time to put everything else on hold and work continually to focus on getting President Trump re-elected.

Just as President Trump is following in the footsteps of George Washington, the Father of our country, our first President and Commander in Chief, so too must we in order to overcome those who are trying to deny us our birthright.

George Washington used one word to brand the wickedness of the enemy he faced. He called it TYRANNY so those who supported British tyranny would have no place to hide among the new nation. His unwavering stance against tyranny in America’s War of Independence put the fire of resistance into the bellies of our young patriots. That fire would provide those freezing and starving souls the courage and conviction to overcome unimaginable odds in order to gain the full measure of their freedoms.

It was this fire that gave rise to a new form of governance, whose hatred for tyranny was only surpassed by its founders’ passion to protect the God given rights of all people.

This was the spark that sent the engines of liberty in motion. With faith that their destiny was Providence’s design and with deference to Our Lady of Liberty as their Sacred Trust, they launched their odyssey of freedom, a Holy Quest, whose stance against tyranny would stamp our nation’s identity and define her eternal mission.

This is the inheritance that our Founders left for us, in order to eternally protect us from those who would deny us our God given rights. Just as Washington faced that evil then, we find ourselves facing the same evil today and it has the same name – TYRANNY. Now we must protect that noble quest and defend it from an enemy within whose hatred for our way of life is relentless and unending.

These traitors that threaten our sacred covenant of freedom neither hold the Constitution as their beacon nor respect those who fight to uphold its honor.

Without the election of President Trump we would have lost those freedoms. America had almost succumbed to the tyranny of godless, Socialist, Secular Humanism here at home, of which Obama was the primary instigator, but Donald Trump foiled his plans.

With Biden running for president, Obama''s army is back and the Democrats are fully determined to his bidding ,transforming America into a socialist state. one that replaces competition and free enterprise with the confiscation and redistribution of wealth. Unless America throws off this tyranny all will be lost

President Trump, you can count on us. “We the People will answer the Call!”

Yesterday I received this message from Desiree Bernstein, a member of MAGA Queens after she read my post. “I like the idea of Vice President Pence doing some rallies with Donald Trump.

As a final note, you must know that President Trump will not sit still. Even through his battle with COVID, I am confident that he will find a way to be active and continue fighting for the rights and liberty of America’s great nation.

Thump- Pence 2020 must be by a landslide