Still the smartest guy in the room 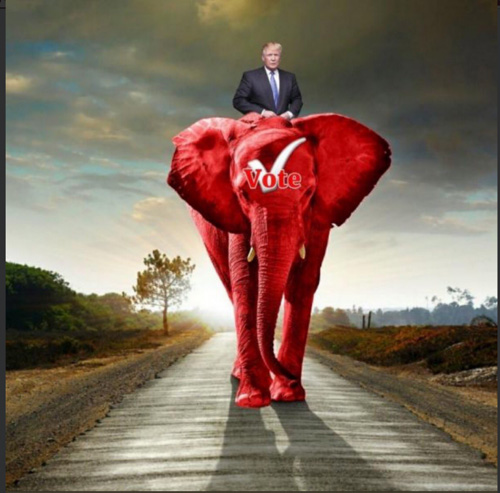 Well, whaddaya know? In the midterm elections of November 6, 2018, the American people rewarded the president – for only the third time in almost a hundred years – with a net gain of three and possibly four Senate seats, lost half the House seats that his predecessor lost, and left the radical left-wing Democrats not rejoicing at their meager gains, but still chomping at the bit to bring down the president who has effectively destroyed everything they believed in, worked for, and thought they achieved over the past 75 years.

The Blue Wave that the leftist media has been predicting for a year now turned out to be a blue puddle, with even their most aggressive spokesperson, former House Minority Leader Nancy Pelosi, making nice and wanting to make deals with the man who sits in the Oval Office.

And Republicans still control the Senate and can still boast that President Trump is solely responsible for:
PLOTTING ANOTHER COUP

After President Trump's annihilating defeat of Hillary Clinton in the November 2016 election – 306 decisive Electoral votes to Hillary's paltry 232 – Americans witnessed an unprecedented reaction from what used to be called the loyal opposition. It was not the requisite graciousness of the disappointed loser. Nor was it the anticipated anger and frustration of those who knew their political philosophy and programs were about to be overturned.

Instead, when the new president was elected – and even before that, on the very day in June of 2015 that he announced his candidacy – the Grand Poobahs of D.C. who always considered themselves the smartest guys in the room by virtue of their educations, lofty positions, fancy credentials, grandiose senses of entitlement, and vaunted self-regard, got together and decided that:
And they fervently believed in their ability to actualize this plan because they had already successfully executed a coup d'état only eight years before, ferreting Barack Obama – of dubious American citizenship and the paltriest of credentials – into the core of America's body politic, concealing his past history, enlisting their reliable media whores to savage anyone who questioned his eligibility and even his very competence, and counting on their Hollywood stooges to use their vaseline camera trick to give the Obama persona a gorgeous glow.

The plot was hatched, and as Rudy Giuliani, one of the president's lawyers, told TV host Sean Hannity in mid-August, ex-CIA director John Brennan was behind the entire bogus investigation into the alleged collusion of the Trump presidential campaign with Russian operatives.

However, with President Trump's ascension to the presidency, they dreaded – with good reason – that their carefully-constructed House of Cards would be dismantled by a seasoned chief executive who loathed their visceral antipathy to the notions of American exceptionalism, a powerful military, booming capitalism, the sanctity of the U.S. Constitution, and borders that protected America against foreign invasion, et al.

In fact, the multi-billionaire George Soros – the mad genius behind so many of these anti-American philosophies and the chief financier behind a huge number of left-wing organizations which help Democrats and many RINOS (Republicans in Name Only) and also those with seditious and/or treasonous agendas – recently admitted as much to the Washington Post, saying that President Trump has almost destroyed the New World Order, and "that he (Soros) did not foresee Trump's meteoric rise to power."

According to Zerohedge.com, Mr. Soros "actually has a reason to feel that way because Trump has single-handedly presided over the dismantlement of the Liberal-Globalist world order that Mr. Soros has worked for decades to build. In a simple spree of tweets, and presiding over the return of [Judeo]-Christian morals, ethics, and values in American society, ideas that are absolutely anathema to the atheist billionaire," the president has literally decimated the Soros vision. 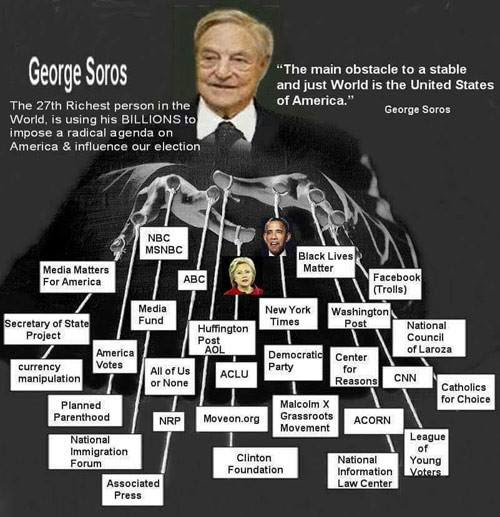 My personal belief is that the entire Obama regime – indeed the entire country, the entire world – was run by George Soros, with the brainy Valerie Jarrett as his personal emissary. In the coup he effected, the wily hedge-fund mega-mogul anointed Mr. Obama the titular head of what now appears to have been a collusion-riven criminal enterprise.

And make no mistake, the fish always stinks from the head. Today, the faux former "president" Barack Obama is still running around the world talking amiably to despots and, recently in Africa, admitting that he was born not in the United States but in – ta da – Kenya! Exactly why "Birthers" like me thought that, according to the U.S. Constitution, he was ineligible to even think about running for the presidency, much less occupying the Oval Office fraudulently for eight years!

Who are the henchmen the poseur Obama chose to run his corrupt regime, the "smart guys" who contrived the phony Steele Dossier and who orchestrated the plot to destroy the Trump candidacy and then presidency? We can start with the poseur himself. 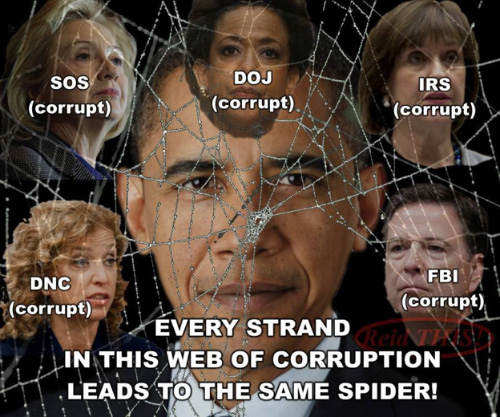 And let us not forget the wives of these Deep State colluders, as scrupulously documented by journalist Marilyn Barnewall in her must-read article, "Deep State Husbands."

Barnewell tells us about the central roles played by Bruce Ohr's wife Nellie Ohr: (Harvard and Radcliffe Colleges with a major in Russian history and literature, master's and Ph.D. from Stanford University). But Ms. Nellie just revealed that she would refuse to testify because of spousal privilege or some such nonsense. If she has nothing to hide, why on earth wouldn't she testify?

Then there is Peter Strzok's wife, Melissa Hodgman, who according to Barnewell, "must be admired for being very quiet as her husband's romantic episode with Department of Justice (DOJ) lawyer Lisa Page has been media-blasted on front pages worldwide. Or perhaps the Page episode was part of a plot?"

Ms. Hodgman-Strzok's career boost happened at precisely the time the FBI needed someone at the Security and Exchange Commission (SEC) to, if need be, control access to any illicit contributions or other transactions from publicly-traded entities (like governments and corporations) involving the Clinton Foundation. 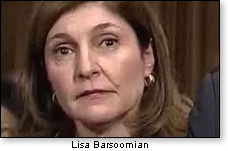 And let us not forget the wife of Asst. Attorney General Rod Rosenstein, Lisa H. Barsoomian (called the "Guardian of the Deep State's Secrets Gate, and as an expert in destroying evidence, or "the cleaner").

This is the short list, but there are many other like-minded collaborators. Hillary Clinton (Wellesley, Yale Law School) is way up there, her mission in life to bring down the legal, legitimate, fairly-won presidency of Donald J. Trump, the guy who permanently wiped her off the political map.

Look at all their fancy credentials. I have...including the oh-so-impressive degrees of the executives and reporters from the New York Times, the Washington Post, the Los Angeles Times, the Chicago Tribune and Chicago Sun Times, on and on and on.

I've also researched the degrees and advanced degrees of the men and women who fancy themselves anchors and commenters and reporters on MSNBC and CNN and the leftist networks ABC, NBC, CBS, and also PBS and radio's NPR, and that is not to omit the career leftists at Fox, like Chris Wallace and Shepard Smith (and, I suspect, Bret Baier and Brit Hume), who consistently fail to conceal their anti-Trump bias.

All the Ivy League schools these leftists attended, as well as the London School of Economics, the graduate schools of Stanford and Cornell and U. of Chicago and the Columbia School of Journalism, on and on, should be deeply ashamed of the colossal and deeply dishonest and biased sometimes sociopaths they graduated!

All of them wrote and talked on and on for months and months on end about Bad Trump and Good Democrats, and all of their predictions fell far short of the Blue Wave they predicted!

In the midterm vote the other day, Americans told the aggressive, arrogant, and vociferous left that they failed to seize the ultimate reins of power because:

November 6, 2018, will go down in history as the day the American electorate affirmed America's legacy that our brilliant Founding Fathers established 242 years ago, and that the American public has now opted for once again – a balance of power – with the lion's share remaining with the president!

And who accomplished this stunning feat? None other than President Donald J. Trump, who single-handedly wrested the reins of power from the previous thug regime which had effectively contaminated our country's most esteemed agencies – the FBI, CIA, NSA, the Pentagon, Homeland Security, et al. – and implanted hundreds of far-left judges, as well as an entire industry of media whores, far too many of whom were and are:
THE SMART SET – REALLY?

There is no doubt that the immense number of people who attempted to impeach, indict, or generally bring down the Trump presidency were of the upper-crust of America's intelligentsia – educated, sophisticated, seasoned in the nefarious ways of Washington D.C., and ferocious in their mission to cover their own crimes by eliminating the one person – President Trump – who could and would expose them and call for his Attorney General to indict them, prosecute them, find them guilty, and imprison them.

No problem, they all thought. We are smart and he is, well, not so smart.

But ha ha ha on all of these misguided egomaniacs. In spite of the massive, collective effort all of them made over the past three years to bring down our chief executive and Commander-in-Chief, they now have to deal with the cold hard fact that President Donald J. Trump – who has formidable education credentials himself – is indeed the smartest guy in the room!