December 25, 2015
RenewAmerica and our citizen political groups fought tirelessly in 2015 to champion the conservative principles that you and I believe in. I exhort you to join our efforts in 2016 – 100% no exceptions pro-life and Personhood of all human beings; ordered liberty and equality of opportunity for all our citizens; and the rule of law, not of men, in our constitutional republic. 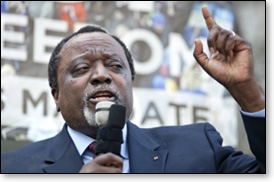 We continue to expose and hold accountable Planned Parenthood's aborted baby body parts harvesting, Obama's neglect and abuse of imperiled Christian populations, his reckless Middle East foreign policy and dangerous promotion of Islamic migration into U.S. territory, his determination to "fundamentally transform" America into an unrecognizable Euro-style nation where all men are NOT created equal and where more rights are given to special groups and the collective than to the individual.

But UNLESS WE VIGOROUSLY OPPOSE THEM, Obama and his Democrat Party, aided and abetted by corrupt Republican establishment cowards, will not stop destroying this country in 2016, but instead will accelerate their efforts to secure Obama's anti-American agenda before he departs the Oval Office.

We are living under the most relentlessly, avowedly pro-abortion and anti-freedom regime in American history, and they will not relent in the New Year. 2016 promises to be a year of great contention and challenge, but it also offers great opportunity for us to aid our beloved America.

Only through faith in God and by our own rectitude will We the American People restore our republic. This is the clarion call I have sounded without fear or favor since Barack Obama first appeared on the national scene, and I was the first national figure to challenge his dangerous rise:

When you have a choice between someone who stands in defense of innocent life and someone who seeks to extend the principle of abortion, even to the killing of fully-born babies outside the womb, let nobody in this state [Illinois] deny that that's not just conservative versus liberal, Republican versus Democrat – that is GOOD versus EVIL – and every conscience has to understand the truth.

There's a direct link here between the practice of abortion that suppresses our allegiance to the future in the womb and the collapse right now, this minute, of the lives of so many of our children in the world. Abortion hardens America's heart. And as our heart hardens, we turn our backs on the silent cry that comes to us from the future as we extinguish the light that ought to be born now to enlighten it. This is the real meaning of abortion, and it's why I don't feel the least bit of compunction in opposing it with everything that is in me.

Our commitment as a political community is absolute, unwavering, uncompromising – 100% in protection and defense of innocent unborn, and of your and your fellow citizens' unalienable rights! If you are in a position to join our work with your time or treasure, God bless you!


WE MUST FIGHT UNCEASINGLY FOR
PRO-LIFE, PRO-FAMILY LIBERTY!
And let us not be weary in well doing: for in due season we shall reap, if we faint not (Galatians 6:9, KJV). May you have a most blessed Christmastide and Happy New Year.