I read your excellent article 'Joseph Farah is right about the homosexualist agenda...' Thank you for publicizing the information from Laurie Higgins' speech. The timing of your article was impeccable — inspired by the Holy Spirit — as far as I'm concerned. I have a horrible story to share with you. I'm hoping you will be moved by it to write a follow-up article.

I'm one of several concerned Catholic parents whose children attend Sacred Heart Schools in Kingston, Massachusetts. Sacred Heart is made up of a high school, middle school, and elementary school, including pre-k. It's not a diocesan school — it's run by the Sisters of Divine Providence from Pittsburgh. They claim Sacred Heart is a Catholic school.

In May of this year, as the school year came to a close and two weeks before he graduated, a graduating senior at Sacred Heart High School decided to write an article in the student newspaper. The article is titled "Shedding light on Sacred Heart's closet," by Joe Nelson. [It can be seen, in PDF format, at the end of this column.]

The Sacred Heart High School administration approved the publication of the article in the school newspaper. The article directly contradicts Catholic teaching as it relates to issues of homosexuality, bisexuality, transgender behavior, God's merciful love, and sin. The teacher moderator of the student newspaper, Scott Dalton, approved the publication of this article, as did the principal, John Enos. The school newspaper is distributed at school and not published on the Web. In general, most parents who send their children to Sacred Heart School have no idea this article was ever published.

Authorizing such an article filled with unsubstantiated propaganda — in the school newspaper — is particularly egregious because of the confusion it creates for the very children whom the school is obliged (pursuant to the Title III of the Code of Canon Law, 794 through 806) to educate and form in the Catholic faith.

We brought this concern to the attention of the principals of the high school and the elementary school. Their initial response was an avoidance strategy, refusing to meet with the parents. We were hoping they would assist us in correcting the erroneous information with the goal of providing correct information on Catholic teaching on these topics to the students who were exposed to the article (7th grade through 12th grade).

After three or four weeks of unanswered requests to meet with him, in June, concerned Catholic parents met with John Enos, the high school principal. Enos said the reason why he approved the publication of the article was that he was concerned about the ramifications of what would happen had he not approved the article (referring to possible claims of intolerance by the student author, or others). When asked, Enos said that, in hindsight, he wouldn't change his position and he would approve a similar article again if presented the opportunity in the future. He also told the parents that the conversation he had with them was not to leave the room — a version of 'What happens at Sacred Heart stays at Sacred Heart.'

A concerned parent spoke with the director of religious education, Chris Connolly, who claimed the newspaper article was just 'not a big deal.' The elementary school principal, Sister Ann Therese, initially refused to meet with concerned Catholic parents, but eventually acquiesced. She said the article should never have been published and it was wrong for Enos to have authorized the printing of the article. She also said that she was confident that after having spoken with Enos:

Sister Ann Therese told the concerned Catholic parents that she had no authority to officially speak for the order. She suggested a meeting with the provincial director for the Sisters of Divine Providence, Sister Mary Francis Fletcher.

On July 19, 2010, concerned parents met with Sister. She basically told us that the order feels no mistake was made, supports the decision to publish the article, and sees no significant problem with its content. Shockingly, she claimed the article published in the student newspaper 'was not encouraging immorality.' The concerned parents were absolutely stunned by the order's position, which, if it is not already clear to you, directly contradicts Sister Ann Therese's (the elementary school principal's) position on the moral appropriateness of the article (for grade 7 through 12).

Sister Mary Francis said the only thing she would do over if she could would be to 'balance' the article with the teaching of the Church on the subject of homosexuality. Similar to Enos, Sister said she would have no problem if the school published a similar article in the future.

Sister said she would be meeting with Enos and the administration to discuss how to address these issues, but she would not allow parental input into a plan for correcting the false information. This is in direct contradiction to Title III of Code of Canon Law, 796,

§2 There must be the closest cooperation between parents and the teachers to whom they entrust their children to be educated. ...

She declined our specific requests to:

1. Publish a thorough correction in the student newspaper,

2. Publish a similar correction on the Web (in response to the fact that the controversy had been publicized on a blog, bringing scandal to Sacred Heart and the Church),

3. Schedule a presentation at the school to directly address the Catholic position regarding homosexuality, bisexuality, transgender behavior, etc.

4. Provide the teachers at Sacred Heart with a course on the Catechism to ensure their knowledge and understanding of the Catholic faith, and

5. Allow parents input into any plan for ensuring that a correction is made by the school.

We have sent Sister a number of e-mails requesting a written explanation of the administration's plan to address the concerns raised by the parents. Sister has essentially ignored these requests; thus, parents will have no input into how to prevent this situation from happening at Sacred Heart in the future. Sister's arrogant, dismissive and disinterested manner in which she has addressed our concerns and requests is disturbing.

As concerned parents, we requested that the administration respect our decision (and duty) to educate our children in a school committed to a true Catholic education. We are stunned and deeply saddened by all this. We feel a moral obligation not to support a school that calls itself Catholic but authorizes articles in the school newspaper that undermine the Catholic faith, marginalize Catholic teaching — easily available to anyone with a Catechism — treat parents with contempt, and marginalize parents for raising legitimate concerns over these published articles.

Years ago, we moved to Kingston for the purpose of someday being able to send our children to Sacred Heart Catholic School. For the past several years, we have sacrificed in order to send our children to this school. With the lack of leadership at the school and the failure to abide by Church teaching, and a demonstrated lack of commitment to the Catholic faith, we now feel morally obligated to shed light on the state of Catholicity the Sacred Heart School finds itself in.

Because Catholic parents 'have ... the duty ... to choose [schools] which ... can best promote the catholic education of their children' (Canon 793), each of the concerned Catholic families has removed some or all of their children from the school. This has been a painful decision for us, but we feel we don't have a choice.

Just like Sister Mary Francis, Superintendent O'Neill said she thought it would have been better to 'balance' the article with the teaching of the Church on the subject of homosexuality. The superintendent and the deputy superintendent initially explained that the article was simply a misstep in a student newspaper and that the school was giving students who may have previously been 'bullied' a chance to vent.

The superintendent has offered to go back to the school with our requests [listed above]. The superintendent said she is not sure how many of our demands she'll be successful in obtaining for us. We are awaiting her report as to what, if anything, the school will be doing to correct the false information the students received in the newspaper article. 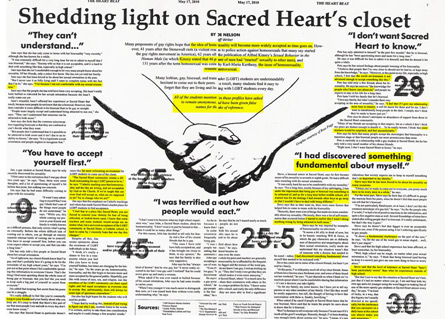 Throw the Bums Out in 2010 (Check out the vile comments by the "crowd" that claims to promote tolerance and diversity — and some of those comments were apparently made by persons associated with the school, including students.)