September 23, 2019
Upon visiting a few alcoholics' anonymous meetings with a friend I returned home mulling over the idea of a god who is "whatever you perceive him to be" – a typical phrase among AA attendees. After questioning my friend about it he said, sure you may use anything even a lightbulb as your idea of your "higher power."

The idea that God can be anything you perceive him to be is the basis for every false religion, cult and whacko new religion, that has ever sauntered on to the scene and that includes major religions like Islam.

Man does not reveal God to man – God reveals himself to mankind.

That is not to say that God is in everything as those who espouse animism which says that all things inanimate or organic have God in them.

In today's apostate churches and broken theological seminaries and Bible schools, we have a classic example of the fall to dim wittedness on full display.

At the once highly respected Union Theological Seminary, which removed itself from the Presbyterians for doubting the full plenary verbal inspiration of scripture, has recently gone full circle.

Students at Union have recently met to address a variety of potted plants and sundry flora to ask the greens for their forgiveness for their climate sins and for not taking care of the planet. No, this is not a mis-print! 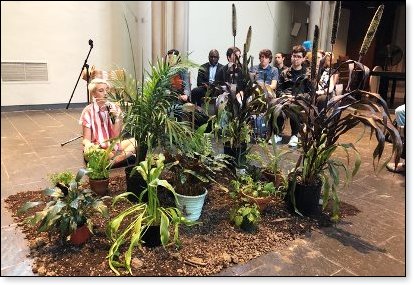 It didn't take long for the satire and comedy site Babylon Bee to bring Union Seminary's goofiness to the front. No explanation is needed, the headline says it all. "Disaster At Union Seminary As Giant, Angry Carnivorous Plant Does Not Accept Students' Apologies"

Perhaps these students slept through basic Christian doctrines and New Testament survey courses, but for those who really want to know – God and his creation are not one and the same.

God reveals himself in many ways. The prophets and patriarchs, the scripture and countless interventions, but last of all he is revealed through his Son. To wit:

"God, who at sundry times and in divers manners spake in time past unto the fathers by the prophets, Hath in these last days spoken unto us by his Son, whom he hath appointed heir of all things, by whom also he made the worlds; Who being the brightness of his glory, and the express image of his person, and upholding all things by the word of his power, when he had by himself purged our sins, sat down on the right hand of the Majesty on high." (Heb 1: 1-3)

Twelve witnesses traveled with Christ daily for three full years. They witnessed countless miracles, healings and several resurrections from the dead including Christ's own rising out of the tomb.

It will take a bit more than a college professor belittling the faith of a fledgling freshman scholar to knock that kind of proof off its very strong base. This is not a dark vision from the Caves of Medina or the sight of golden tablets in the deserts of America handed down by an angel. This is the kind of revelation that you can stake your life on.

America was founded on a strong Christian faith and when the church becomes a popular hangout for the undecided, those seeking only experientialism and spectacularism and the woefully backwards and apostate, the threads of our moral fabric is bound to come unraveled.

The long version is a winding road toward dead religions, socialism, diversity and perversion. It winds and curves and leads to hell.

The short version is easy.

"Blessed is the nation whose God is the LORD; and the people whom he hath chosen for his own inheritance." (Psalm 33: 12)