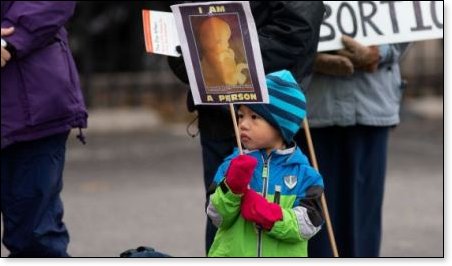 After the leaked document from the Supreme Court hit the news cycle, we saw instantly just what we expected. Protestors began gathering in front of the Supreme Court Building, brooding, festering, flashing posters and messages of discontent.

They are the people who march and protest to retain the practice of murdering innocents to save their own so called free lifestyle. They say it is for womens rights and womens health. But the simplest mind of a childas well as the mentally challengedknows that abortion gives no rights at all to female fetuses, otherwise known as future women. And there is nothing healthy about aborting (killing) any creature, from a field mouse to a human being.

We continue to debate the morality of abortion because trying to justify sins and worst behaviors is as old as time itself. But there will never be an ounce of health found in the death of anyone or anything.

Shall all who feign wisdom and learning wait for a Harvard professor to teach them such fundamentals? Or will we wait for the New York Times to inform us, much like the Hunter Biden laptop, before we believe it?

Keep thee far from a false matter; and the innocent and righteous slay thou not: for I will not justify the wicked. (Ex. 23:7)

Was the leak politically motivated to enrage leftists and liberals? Certainly, they are not above it. Obama has taught them wellexactly how to use a crisis, even if they must manufacture one to get the desired result.

The crowd mulling outside the Supreme Court Building is proof that Donald Trump was being gentle when he called the left the "swamp," rather than the "sewer."

Here is how God sees it, and we agree.

There is a generation that [is] pure in their own eyes, and yet is not washed from their filthiness. (Pr. 30:12)

The false wall of semantic obfuscation we lean on will crumble

Americans who cant get their way do as any brat or unruly child would dothey resort to name calling. In the wokeness of today, the name calling results in cancelling people, ruining lives and careers, and in some cases, violence.

The familiar words are worse than the Bibles warning about familiar spirits, and they probably come from the same source.

What are the words?

At the top of the list are racist, homophobe, transphobic, bigot, pro-life, and un-woke.

Seeing these words through the eyes of the Savior of the world puts them in the place where they belongthe trash heap of self-justification. How does Christ see our woke vernacular?

Words like immorality, depravity, and reprobation truly describe whats wrong with America today, but sinners are now resorting to mob mentality in their pursuit of all things prurient. The herd sees nothing until it begins falling over the cliff; by then its too late.

Just how late is it for America?

When we see headlines like California Next State to Legalize Murdering Babies After Theyre Born in the news we hardly have to ask about how much time America has left.

The idea that there are so many people who have acquiesced to the idea of killing the innocents stretches credulity to the limits. How does an entire state not see that killing babies that are almost a month old is pure and un-adulterated murder?

Why dont they care. Has murder found a sanctuary state?

Adding to the ugly portrait of deep reprobation, we now have LGBTQ activists that think we need to provide puberty blockers and surgery to minors and children who have moments of doubt about their own gender identity.

The eschatological clock is ticking for the entire worldbut for the United States there is but a few minutes left.

We hope the political scene will turn for the best in 2022 and even better in 2024, but lets do a reality checkwe the people must turn back to God and the things that are right, or our nation will go the way of all great kingdoms before us.

Read it, yet one more time before the clock runs out.

At what instant I shall speak concerning a nation, and concerning a kingdom, to pluck up, and to pull down, and to destroy it; If that nation, against whom I have pronounced, turn from their evil, I will repent of the evil that I thought to do unto them. (Jer. 18:7-8)

Americas Folly: Gambling the Health and Safety of our Children Against our Very Existence

Best of Archives Series  Abortionists: Cruel and Brutal Defenders of Infanticide and the Most Sadistic Racists on Earth

May 11, 2022
Abortion: Was not ever politicalit has always been a moral issue

April 28, 2022
Why is Joe Biden the only president in U.S. history who appears to hate Americans?

April 21, 2022
No, its not the economy, stupid  its the raging perversion, moral depravity, and transgender mutilation of our own children

April 3, 2022
Transgenderism – Americas demonically inspired path to its own destruction

March 20, 2022
Abortion doctors and Vladimir Putin  both, deadly for children

March 6, 2022
Bidens SOTU  A walk through the valley of blatant lies and obfuscation

March 4, 2022
The global response to Putin  A preview of the coming war without weapons