Michael Bresciani
Davos? Do we save the planet or the souls of mankind? 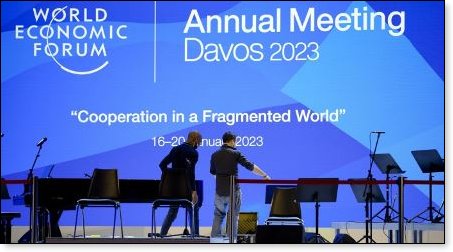 Men like John Kerry are telling us that we need to fine-tune the earth’s temperature to keep it at a crisp 1.5 degrees Celsius above the evil pre-industrial highs of our recent past.

WEF founder Klaus Schwab says companies and corporations that will not get on board the climate change worldview will be on the wrong side of history.

Like an idea that has spung up out of an episode of the Simpsons, Europe is all in with alarmism, panic, and worry mongers who have unilaterally decided that our planet needs saving. All this is based on climate models and science that is as dubious as the alleged source of the Covid-19 virus.

In his speech at Davos, John Kerry said that people like Klaus Schwab, Greta Thunberg, and others were touched by something that put a calling on their lives to engage in the saving of the planet. He described that touch as something extra-terrestrial!

The comparison to those who were touched by God’s Holy Spirit to save the world through the preaching of the gospel is obvious. But they have been touched by something extra-celestial.

One of the most honest assessments of those at the Davos meeting was coined by John Kerry and may be the only truth found altogether. Kerry said it all when he exclaimed, “We have been touched.” Yes, they have been touched and considering Al Gore’s rant at the meeting, we are all in agreement. There is help for this, if they choose to seek it out. It is a malady of the mind that falls somewhere between OCD (obsessive compulsive disorder) and TSIFS (the sky is falling syndrome).

Musk sees the self-appointed masters of the universe as a group of well-meaning but amateurish and totally mis-guided wannabes. The Twitter Chief described the forum as an “unelected world government” that nobody wants or even asked for.” Elon asked if they are trying to be the “boss” of the earth.

When asked, Musk said that the reason he did not attend the meeting was essentially because it sounded too boring.

Boring it may be, but the real problem is that these self-appointed saviors of the planet are a danger to the planet in more ways than one.

It’s an old formula that in today’s world, is becoming all too common. Like air, fuel, and combustion the formula is:

Didn’t the Bible warn us about this?

In fact, every bit of this is outlined meticulously in scripture. The prophetic warnings have been known for centuries, but their “time” was not yet brought into focus.

The Bible refers to the time as “the last days,” even though some climate cultists call it the great reset. From the sweeping changes across the globe down to the finest detail, it has all been forewarned of in the Bible.

Businessman Jim Hagemann Snabe of Siemens has called for the replacement of meat as a staple food across the globe. He thinks that all that protein consumption should be halted and replaced with insects. He predicts that the world will go that way—and like it.

During the Second World War, Siemens was noted for the use of forced labor, including the famous women’s concentration camp known as Ravensbrück, where the famous Christian evangelist and author, the late Corrie Ten Boom, was held.

What we have is experience and vision to bring the great reset around, along with its planet saving diet of bugs and crawling things.

This is what scripture warned us of concerning the last days of time. These words were given to Timothy, a young disciple who followed the Apostle Paul.

Now the Spirit speaketh expressly, that in the latter times some shall depart from the faith, giving heed to seducing spirits, and doctrines of devils; Speaking lies in hypocrisy; having their conscience seared with a hot iron; Forbidding to marry, and commanding to abstain from meats, which God hath created to be received with thanksgiving of them which believe and know the truth. (1Tim 4:1-3)

Biblical prophecy says they will get their “Great Reset.”

All of the fanfare about nuclear annihilation and extraterrestrial visitations is spurious secular speculation. It is the worrying of fools.

There will be plenty of trouble and warfare right up to the end or the second coming of Christ, but it is not until the final war known as Armageddon that the kingdoms of men will be handed over to God alone.

Prior to Armageddon all people will come under one ruler and one governance. The man is called the Antichrist. He will crush the church, resisting nations, and every individual that wants to go another way will have to forfeit their lives to do so.

And it was given unto him to make war with the saints, and to overcome them: and power was given him over all kindreds, and tongues, and nations. (Rev 13:7)

What all the evil the nations are now clamoring for will be given to them on the proverbial silver platter. At the head of their great reset will be the greatest despot ruler of all time. Unlike all despots before him, he is able to take the world through a unique economic system without firing a single shot. He offers a great reset the world decides to buy.

The evil they want will be complete for seven years. It will cost many lives.

Is it our carbon footprint, or souls stained with sin that we should deal with?

After more than a half-century of studying second-coming doctrine, I can say without doubt that Christ does not return to a planet that has been destroyed. He rules the earth in the coming days and besides the cities that will all be brought down in a final earthquake; he will not have to save any of the earth. In fact, he makes topographical changes and improvements to it, for all who will soon repopulate it far beyond the present numbers.

Christ doesn’t need to save a planet He is given for an inheritance. But as for the souls of men, they must decide if they want Christ. The invitation to salvation is universal—no one is refused. But the decision is always up to each and every individual that hears the gospel.

The self-appointed saviors of the planet cannot save the planet, themselves, or any other person in this present world.

But as many as received him, to them gave he power to become the sons of God, even to them that believe on his name. (Jn 1:12)

It is not our carbon footprint, but it is our guilty stains that we must deal with, before the final curtain comes down.

There is a fountain filled with blood

And sinners, plunged beneath that flood,

Lose all their guilty stains.

Biden, the liberals, and the climate change cultists are sinking America – How are they going to save the planet?

Do Some Climate Alarmists Wish Us All Dead?