In today's America, where truth is exchanged for lies, our place in the political realm is particularly tricky.

Our faith offers a better way for the apostate. Tragically, when we make our case in the political sphere, we are perceived as judges and legislators. When we call on our representatives to lead the way, they ultimately don't have the heart for it.

Cultural decay becomes the logical conclusion, at least in the political realm. There comes a point, God willing, when those on top don't truly represent a faithful majority. Ultimately, we have the existential and historical high ground. Consider the following Constitutional principles:

*How "of all the men we meet with, nine parts of ten are what they are, good or evil, useful or not, by their education"

*The denial of God's existence undermines the social order and leads to chaos. We must reject and ultimately exclude all atheistic varieties of philosophy and all attempts to deduce ethics and natural law from purely secular premises, for example, man's "autonomy or dignity or human flourishing." At a minimum the cosmological argument is valid and proves God's existence.

*We as a people (which includes all of mankind) have been "sent into the world by God's order, and about his business, we are his property, whose workmanship we are, made to last during his, not one another's pleasure.

*Human rights are founded on the biblical belief in creation: "All men are created equal, they are endowed by their Creator with certain unalienable rights, life, liberty, and the pursuit of happiness."

*Lastly and of Central importance, Government needs the consent of the governed. This is vital to the Declaration of Independence and a faithful upholding of our rule of law as stated in our U.S. Constitution.

Reason and religious principle are not mutually exclusive. Rather they are vital, co-dependent variables essential in ensuring a fair, equitable, citizen-centered form of government.

There are a variety of revolution minded people on every ideological side. Ultimately, change comes from the inside one heart at a time, anything less is window dressing.

We needn't divorce reason from revolution. In fact, we already got it right. This country's been founded on the one wholly tried and true foundation. No redos required... 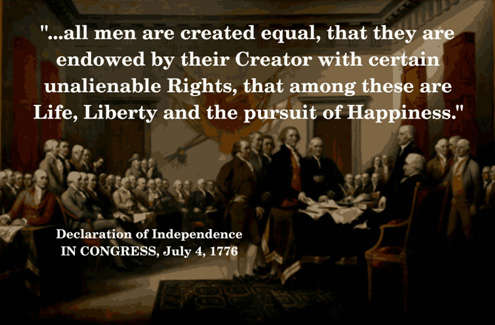