September 16, 2012
There's an old story about a former President who was jogging one morning when he noticed a little boy on the corner with a box. Curious, he ran over to the child and asked, "What's in the box, young fellow?" The little boy said, "Puppies, they're brand new puppies." The President laughed heartily and said, "Well, what kinda puppies are they?" "Democrats," the boy said. Being a Democrat, the President replied. "Oh, that's fantastic!"

A couple of days later the President was running with one of his buddies when again he spied the boy with his box just ahead. The President said to his friend, "C'mon, you gotta see this." So they both jogged over to the boy with his box. The President said, "Look in the box, isn't that special? Look at those little puppies. Hey kid, tell my friend what kind of puppies these are." The child replied, "They're Republicans." "Whoa!!!" said the President, "I came by here the other day and you said they were Democrats. What's up?" "Well," the kid said, "they're eyes are open now."

One can only hope and pray the eyes of Republicans, Democrats, Independents, and all of America are open to what happened at the recent three day National Democratic Convention (DNC) in Charlotte. Originally, the DNC had removed any reference to God in their Party Platform. On Wednesday, however, former Ohio Governor Ted Strickland made a motion to amend the Platform to reinsert God's name. The amendment needed a two-thirds majority for passage, but after three roll calls it was clear the vote was seriously split. When the Chair, Los Angeles Mayor Antonio Villaraigosa determined arbitrarily that the motion passed, many Democrats vehemently booed.

Of course, some Democrats have been saying the fallout from the major blunder is unwarranted. Not so fast, says Rabbi Brad Hirschfield. He writes:


"The vast majority of Americans believe in God, and when language of 'higher power' is included, close to 90% of us are self-professed believers. So leaving any mention of God out, is not simply a theological issue, it reflects a kind of out-of-touch-ness with precisely the American mainstream to which Democrats say they best understand and represent.

And beware those who suggest that all of this is much ado about nothing given the fact that the platform mentioned faith numerous times even as it removed God from the platform. Faith, as mentioned and even celebrated in the Democratic platform, is simply a specific means to a narrowly defined end.

Faith, as it is understood by the Democratic platform, is a footnote and not much more. It is simply one more way to justify what Democrats want to do anyway. Even for people to think that includes many good and important things, that's a pretty narrow and self-serving understanding of faith." [1]


Rabbi Hirschfield's remarks are right on target. Indeed, the Democratic Party Platform essentially trades faith in the eternal verities of Holy Writ for a tawdry counterfeit religious experience characterized by materialism, sensual desire, and a cheap narcissistic estimate of life.

Nevertheless, such has utterly failed to provide the nation with the great social order or peace of mind its political evangelists have promised. It's failed because the human spirit requires much more. It requires spiritual sustenance. The human spirit needs a sovereign God that holds man accountable to moral absolutes. God does not exist simply to aid and assist mankind in reaching his own ends. Mankind exists to know God, to enjoy Him, and to do His good pleasure.

Americans are living in a time much like that passage in the book of Judges, where it reads, "Every man did that which was right in his own eyes" (Judges 21:25). Unfortunately, the consequences of that era were severe punishments and servitude to tyrants, not unlike anything Americans can ultimately expect for taking the same course.

One need only consider the youth of this age who have undergone considerable amoral reconditioning in the public schools to see where America has dangerously been heading for some time. A little more than two decades ago, a columnist with the Fort Lauderdale News & Sun-Sentinel, James Driscoll, described them this way:


"At the moral center of many young Americans aged 18-30 there is a vacuum, and it's nearly perfect. It contains none of the bedrock ethical values long considered essential to living a decent life...Instead, this self-indulgent generation believes passionately only in this: It is entitled." [2]


No doubt, the younger generation Driscoll was talking about twenty years ago were delegates at the recent Democratic National Convention — zealously crafting and supporting their so-called entitlements in a Party Platform that advocates for the murder of innocent children through legalized abortion, the dissolution of marriage and the family in the promotion of the homosexual lifestyle, the growth of bigger government, and even the expulsion of what they believe to be an irrelevant God to public affairs.

Patrick Buchannan also noted that today, "Of Americans younger than 30, 1 in 4 profess no faith. Among Democrats, the figures are surely higher." [3] One can be certain it was this constituency the Platform with no God in it was meant to appease and energize — the most ardent supporters of the President's re-election. The proposition failed only because the firestorm against it outside of the Convention precipitated a panicking President to at least have God reinstated.

The denial of God has never been a part of America's heritage. But the current mythical view of the so-called "separation of church and state," which essentially removes any mention or acknowledgment of God and His Lordship from public life has been calamitously entrenched in the national psyche for way too long. All of this despite the fact that America's birth certificate, the Declaration of Independence, mentions the Judeo-Christian God four times and not in a small way. The Constitution is signed "in the year of our Lord" — an undeniable reference to the deity of Jesus Christ. Chaplains have been a part of the government payroll since the birth of America. All fifty states mention God in some way in the preambles of their Constitutions. The Liberty Bell has a Bible verse engraved on it. Over and again the Founding Fathers quoted the Bible in their writings. Thanksgiving, Christmas and Easter are three national holidays particularly of Christian origin. It is a long-standing tradition that oaths in the courtrooms have invoked God and been made with one's hand placed on the Bible. God and various Bible verses are carved in stone throughout Washington, D.C. Moses and the Ten Commandments are prominently displayed on the U.S. Supreme Court Building. Emblazoned over The Speaker of the House in the U.S. Capitol Building is the National Motto: "In God We Trust." For Democrats to remove the name of God from their Party Platform and then "boo" its reinsertion is symptomatic of what should be deemed a disturbing trend and a grievous loss in national integrity. 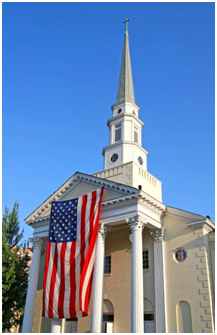 George Washington has been attributed with the statement, "It is impossible to rightly govern the world without God and the Bible." [4] Washington also warned, "Of all the dispositions and habits which lead to political prosperity. Religion and morality are indispensable supports. In vain would that man claim the tribute of patriotism, who should labor to subvert these great pillars..." [5]

So let it be said without hesitation that the dispute among Democrats over excluding God in the Democratic Party Platform was not only un-Godly, but un-patriotic and un-American. There should have never been any such quarrel among America's leadership! Its presence is demonstrative of a Political Party that's drifted far from this country's true religious moorings.

Moreover, if this nation wishes to sustain its liberties, it had better have its eyes wide-open to this issue. To ignore or diminish its importance is like marching forward with eyes wide-shut.