September 24, 2012
A man was pulled over by a police officer for speeding. As the officer was explaining to the driver that he was breaking the speed limit, the officer noticed several large daggers in the backseat.

"What are you doing with those daggers?" he asked suspiciously.

Still suspicious, the officer requested, "Well, show me." So the juggler reached for the daggers and started juggling them. He stood in front of his car juggling six daggers at one time — overhand, underhand, behind the back. He was putting on quite a show for the amazed officer.

While he was performing, another car whizzed by. The driver couldn't help but do a double take and then said, "I'm not ever drinking again for the rest of my life! I could never pass these new sobriety tests!"

Drinking alcohol today is a commonly accepted way of life, despite the fact that it has become the accepted killer of our time. Alcohol is a drug that claims more addicts than any other drug in America. Alcoholics outnumber drug addicts ten to one, and alcoholic deaths out number drug overdoses three to one. Alcohol causes more deaths than AIDS, heroin, cocaine, marijuana, and crack combined.

Still, Christians differ on the role of alcohol in society. Drunkenness is universally condemned among the followers of Christ, but social drinking is not. Many Christians will claim they have been saved by grace and living with a principle of total abstinence constitutes a form of legalism that somehow negates the fact that they are redeemed by grace.

But grace is not a license for the abuse of Christian liberty. Christian liberty should take into account a number of factors such as (1) Will my actions honor and please the Lord? (2) Is my position on the matter in question a sound one? (3) What are the associations of the act in question? (4) How could the act affect others?

Abstinence from the use of alcoholic beverages is clearly a sound position for any earnest Christian. There may be much debate over what the Scriptures actually say about the nature of alcohol, its use and abuses. Nevertheless, there is no debate over the fact that God required abstinence for those in closest relationship to Him. Leviticus 10:9 forbids the use of wine to priests who ministered in the Tabernacle. Wine was also forbidden to those under special vows, like John the Baptist, who was a Nazarite (Numbers 6:3).

Should a New Testament follower of the Lord be less holy than those separated unto God in Old Testaments times? Hardly! The apostle Peter argued, "[A]s the One who called you is holy, so you yourselves should be holy in all your conduct; for it is written, 'You shall be holy, because I am holy'" (I Peter 1:15-16).

The apostle Paul wrote, "Let us behave ourselves decently as befits the daytime, not in carousing and drinking, not in immorality and debauchery... Instead, clothe yourselves with the Lord Jesus Christ; do not make provision for the flesh to gratify its cravings" (Romans 13:13-14 — authors italics).

Certainly the Lord is honored and pleased with the child of God that endeavors to live a holy life and seeks to leave no open door for something that could feed and gratify carnal drives that lead to spiritual missteps or physical mishaps.

Is there something good and uplifting about alcohol — something that helps one, as well as others draw nearer to God? Hardly! Although in recent years the alcohol industry has contributed some of its proceeds to many noble causes, it has overwhelmingly been the partner of excess and evil of every form.

How can a Christian drink without making, at the least, an implied endorsement of such a wicked enterprise? The Scriptures ask, "[W]hat association is there between light and darkness? Or what harmony is there between Christ and Belial.." (2 Corinthians 6:14-15). 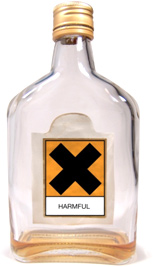 Social drinking is at best an act of appeasement, an act of compromise, a declaration of "détente" with a societal scourge that is responsible for the destruction of millions of lives. For the sake of others who may be weak in this area, it's important for Christians to avoid being a hindrance. Romans 14:21 instructs, "It is well to eat no meat and drink no wine, to do nothing that would make your brother to stumble."

Of course, many well-meaning folks will argue that there wouldn't be any problems from alcohol use if people would simply drink responsibly. "Moderation in all things," they claim.

But moderation isn't the answer because with every stated benefit named in favor of the use of alcohol in moderation there is another risk to counter it. Studies by the National Institute on Alcohol Abuse and Alcoholism show that there are still significant risks with moderation, higher risks of strokes for many, a higher risk of birth defects and cancer for women, harmful interactions with medications, some of which are simply over the counter drugs. This is just to mention a few of the risks.

Rev. James B. Dunn, once wisely wrote in a poem,

What is Drunkenness?
Darkness.
What is Moderation?
Twilight.
What is Total Abstinence?
Midday.

What is Drunkenness?
Slavery.
What is Moderation?
A chain.
What is Total Abstinence?
The power which breaks the chain and sets the captive free.

What is Drunkenness?
A fire.
What is Moderation?
That which kindles it.
What is Total Abstinence?
That which puts it out.

What is Drunkenness?
Death.
What is Moderation?
The way to it.
What is Total Abstinence?
Life.

What is Drunkenness?
Ruin.
What is Moderation?
Danger.
What is Total Abstinence?
Safety.

To do otherwise is like juggling with life's many daggers while drinking. It just doesn't meet the test of a life lived most wisely.