Rev. Mark H. Creech
A sword over the manger

December 22, 2012
Most people know the story of Damocles sword, or at least they've heard the expression. Damocles, a courtier of King Dionysius, was enamored with the great fortune of his king. Surrounded by every luxury, high fashion, delicacies, and court flatterers, Damocles spoke often about the king's abundance and power. So that Damocles might experience the life he envied, his majesty offered to trade places with him. Damocles was more than happy to oblige, unaware that the king had arranged for a huge sword to hang above the royal throne, held only by a single hair of a horse's tail. King Dionysius successfully conveyed to Damocles the constant peril under which the great man lived.

This Christmas carolers will sing, "Silent Night, holy Night, All is calm, all is bright," or "O little town of Bethlehem, How still we see thee lie" — songs that convey a scene of serenity and peace surrounding the birth of Christ. Yet the entrance of the newborn King into the world can hardly be accurately described as serene. Instead, hanging imminently over the Christ-child was a vicious sword of defiance — a sword that would never disappear.

The insolence was first seen when Herod learned of the child who would be born, King of the Jews. Being a mastermind of assassination, he was not about to accept easily any report of a possible rival. Under the pretense of wanting to worship the new monarch, he treacherously enquired of the religious aristocracy concerning the place of Christ's birth and the Wise Men about the great star that marked His coming; all with the real intent of putting into action a swift and savage act of murder. Herod would order his soldiers to destroy every male child under the age of two in Bethlehem and nearby districts.

Oh the terrible ends to which men will resort to be rid of Jesus. Like Herod, they see in Him a rival to their own sovereignty — someone who interferes with their lives — someone who won't allow them to do as they please — someone to whom they are accountable. Therefore, they will go to any lengths in raising a sword of defiance.

That sword continues to dangles over the manger to this day with attacks on Christ's presence. There are people who will not even concede Jesus' existence, referring to Him as simple lore.

Currently in New York City, a billboard, sponsored by American Atheists, features an image of a jolly Santa Claus above a sacred wooden figure of the crucified Christ that reads, "Keep the merry! Dump the myth!" [1]

What defiance! What a desperate act to do away with the central figure of the human race — the One who has influenced more lives for good than any other in human history.


"This Jesus of Nazareth, without money and arms, conquered more millions than Alexander, Caesar, Mohammed, and Napoleon; without science and learning, He shed more light on things human and divine than all philosophers and scholars combined; without the eloquence of schools, He spoke such words of life never spoken before or since and produced effects which lie beyond the reach of orator or poet; without writing a single line, He set more pens in motion, and finished themes for more sermons, orations, discussions, learned volumes, works of art, and songs of praise, than the whole army of great men of ancient and modern times." [2]


Only someone suffering from a grudge — a wicked bias — a prejudice of enmity — would ignore such preponderance of evidence and relegate Jesus to the realm of legend — only someone who would wield a sword of defiance against His lordship.

That sword of defiance also suspends over Christ's paternity. Five years ago, The Spectator Magazine focused on the topic of the virgin birth and ironically a number of persons represented in their article expressing disbelief were clergy. [3]

Obviously the sword of rebellion raised against Jesus is not reserved to the rabid atheist, the skeptic, the agnostic or free-thinker, but also by the religious.

Still such insubordination among the supposed pious in society is unjustified.

William Evans in his work, The Great Doctrines of the Bible, states the argument well:


"The narrative of the virgin birth need not stagger us. The abundance of historical evidence in its favor should lead to its acceptance. All the manuscripts in all the ancient versions contain the record of it. All the traditions of the early church recognize it. Mention of it is made in the earliest of all the creeds: the Apostles' Creed. If the doctrine of the virgin birth is rejected it must be purely on subjective grounds. If one denies the possibility of the supernatural in the experience of human life, it is, of course, easy for him to deny this doctrine...The preconceptions of thinkers to a great degree determine their views. It would seem that such a wonderful life as that lived by Christ, having as it did such a wonderful finish in the resurrection and the ascension, might, indeed should, have a wonderful and extraordinary entrance in the world. The fact that the virgin birth is attested by Scripture, by tradition, by creeds, and that it is in perfect harmony with all the other facts of that wonderful life should be sufficient attestation of its truth." [4]


Nevertheless, among many liberal clergy the data isn't convincing enough. But in reality it's not that the evidence isn't adequate for them. It's that acknowledging Christ's deity would require more than submission to religious ritual; it would necessitate a change of the heart. It would mandate a transformation of life, not just a ceremonious, creedal, do-gooder approach to life.

Lastly, that sword of defiance hovering over the Christ-child is one that is known to attack His purity.

Only days ago, the Christian Post reported a progressive Anglican Church in New Zealand posted an advertisement that infers that the son of God was homosexual. The poster notably says "It's Christmas. Time for Jesus to Come Out." It includes a picture of the baby Jesus in the manger with his infant head surrounded by a halo containing the colors of the rainbow. [5]

Sickening! Blasphemous! Some are so defiant of Jesus and the impeccable standard raised by His life; they would seek to redefine Him to conveniently fit their deviance.

As Danny Akin, president of Southeastern Baptist Theological Seminary recently stated during a theological conference: "It is simply undeniable that Jesus assumed heterosexual marriage as God's design and plan...Jesus sees all sexual activity outside this covenant as sinful." [6]

Indeed. And to think the most priceless characteristic of the Christ-child, His total innocence, His sinless nature, His purity, His holiness, would be impugned with the suggestion He bore in Himself the seed of unnatural affections is unconscionable! 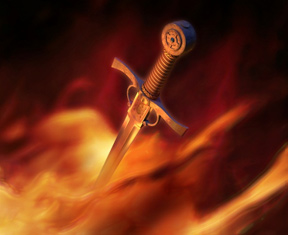 Regardless, this is what men do when they fear this Lord of lords is liable to interfere with their ambitions, their attachments, and their appetites.

Like a Damocles sword, a sabre of defiance has always been raised against Jesus, from His birth to throughout His life to the present. Undeterred, Christ and His church continue marching forward victoriously.

Just this week, the Pew Research Center's Forum on Religion and Public Life announced that Christianity remains the religion with the most adherents worldwide. [7] Ultimately, the Bible says "at the name of Jesus every knee will bow, in heaven and on earth and under the earth, and every tongue will confess that Jesus Christ is Lord, to the glory of God the Father" (Philippians 2:10-11).

In the story of Damocle's sword, King Dionysius was a tyrant. In life, however, Jesus is a benevolent Lord. Those who resist the authority of the baby Jesus fight an unwarranted and futile war against Him. In fact, the sword they raise obstinately above Him suspends unknowingly over themselves by little more than a single strand of a horse's tail. For those who live by the sword are precariously in jeopardy of dying by the sword (Matthew 26:52). Those who live in unbelief risk spiritually perishing by it.