February 3, 2013
Comedian Robin Williams once argued, "If women ran the world, we wouldn't have wars...just intense negotiations every 28 days." Apparently that's no longer true since Defense Secretary Leon Panetta made the decision that women should be allowed to participate in war in the same way as men. Women had previously been denied combat positions, but not anymore.

It is indeed a different day. Nevertheless, while the PC crowd is jubilant about this change, Americans, especially men should be outraged.

Is gallantry now completely dead? When General Douglas MacArthur delivered his powerful speech, "Duty, Honor, Country" at West Point, he told cadets: "Your mission remains fixed, determined, inviolable: it is to win our wars. Everything else in your professional career is but corollary to this vital dedication. All other public purposes, all other public projects, all other public needs, great or small, will find others for their accomplishment. But you are the ones who are trained to fight. Yours is the profession of arms, the will to win, the sure knowledge that in war there is no substitute for victory; that if you lose, the nation will be destroyed." MacArthur also noted the soldiers experience is "the filth of murky foxholes, the stench of ghostly trenches, the slime of dripping dugouts; those boiling suns of relentless heat, those torrential rains of devastating storms; the loneliness and utter desolation of jungle trails... the deadly pestilence of tropical disease." [1] Have men become so spineless they're not angered that their government wants to put their girlfriends, their wives, and their daughters in the middle of such hell?

Let the radical feminists opine and rail, but the fact is nature's God made women different than men. In her 1992 testimony before the Presidential Commission on the Assignment of Women in the Armed Services, Phyllis Schafly rightly argued, "We hear the constant refrain that 'times have changed,' but there is no change whatsoever in obvious facts of human nature, such as that men and women differ in so many important ways, that healthy young women are apt to get pregnant, and that there is a profound difference between male-to-male bonding and male-to-female bonding – a factor that can make the difference between life and death on the battlefield. No matter what social changes are alleged to have taken place, the policies of our U.S. Armed Forces should respect the dignity and value of marriage and motherhood." Granted, women are equal in human dignity as men, but to make them equal in every role is the highest of follies. [2] 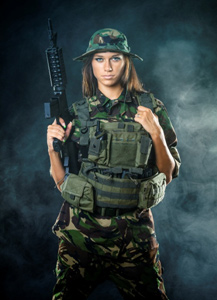 Bryan Fischer in an op-ed piece titled, Women in Combat a Really, Really Bad Idea, references researcher and writer Brian Mitchell who reports the average female Army recruit, "is 4.8 inches shorter, 31.7 pounds lighter, and has 37.4 fewer pounds of muscle than her male counterpart. She has 55% of the upper body strength of the average male recruit, and only 72% of his lower body strength. On the bench press, men demonstrate 270% more power and perform 473% more work than women." Fischer adds, "Female soldiers are twice as likely to suffer leg injuries and nearly five times as likely to suffer fractures as males. The Army gives women an extra three minutes to complete a two mile run, which, of course, should be no problem. I'm sure the enemy will simply wait for them to catch up." [3]

Furthermore, what does lifting the ban on women in combat mean for the draft? The U.S. Supreme Court ruled in Rostker v. Goldberg (1981) that women could constitutionally be exempted from the draft because draft registration, conscription, and military combat are all one continuum. But is that going to be the end of the matter? Not likely when one considers that during the presidential campaign of 2004, former Massachusetts Sen. John Kerry, former Vermont Governor Howard Dean, and retired Army Gen. Wesley Clark, all contended that draft registration was needed to set the nation on the right path toward true equality for all women. Look out ladies, it appears liberals and social experimenters may not have pulled the trigger, but they have their high-powered sights on drafting you – young single women, young women planning for college and a career, young women planning for marriage and a family, young married women and even young mothers. One might contend that it's no greater loss for a man when he's drafted. But please, it's nothing less than barbarism that would coerce a woman to fight like a man or to fight for a man.

But even dismissing the prospect of the draft, what women are most likely to end up in combat? "Make no mistake," says Lee Siegel, "It won't be the elite female pundits, as well-intentioned as their joy over the Pentagon's decision no doubt is, who bear the anguish of death and maiming in war. It will be women from society's lower strata who, like their male counterparts, will find themselves on the battlefield, especially single mothers and especially from states where entitlement programs are in shreds." [4]

No, this is wrong on every level. The late great Presbyterian minister Peter Marshall once wrote, "No nation has ever made any progress in a downward direction. No people ever became great by lowering their standards...It is not progress when womanhood has lost its fragrance. Whatever else it is, it is not progress!" [5]

Yes, it appears a new level of equality has now been achieved for women. The sweetness, the tenderness unique to their gender, their unmatched beauty that is the crown of creation, their ability to give life, their motherly skills, can just like men now all be shot to pieces or blown to smithereens.