March 30, 2013
Auguste Comte, a French philosopher and skeptic, was once belittling English writer, Thomas Carlyle, for his faith in Jesus Christ. Comte suggested that he might start a religion of his own to replace Christianity.

"Very good," responded Carlyle. "All you need to do is to be crucified, rise again the third day and get the world to believe that you are still alive. Then your new religion just might have a chance."

No religion in the world can match the claims of Christianity. What differentiates it from other religions is its declaration that Christ literally rose from the grave. There have always been those who have sought to debunk the resurrection of Christ, but whatever arguments have been offered fail miserably. Harvard professor Dr. Simon Greenleaf summed it up well, when he said, "According to the laws of legal evidence used in courts of law, there is more evidence for the historical fact of the resurrection of Jesus Christ than for just about any other event in history."

Indeed, and the ramifications of that one event in human history – the resurrection of Jesus – gives us seven great assurances for life. 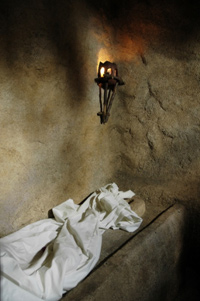 It is clear that everything about the Christian religion stands or falls with the bodily resurrection of Christ from the grave. If it were possible to show Jesus never rose again, the entire construct would crumble into dust. Thus, the Apostle Paul's statement, "If Christ has not been raised, your faith is futile; you are still in your sins. Then those also who have fallen asleep in Christ are lost. If only for this life we have hope in Christ, we are of all people most to be pitied" (I Cor. 15:17).

But Christ is raised from the dead and anyone willing to openly consider the Bible's claims will discover that the preponderance of the evidence for the resurrection should lead one to implicit faith.

What will you do with this Jesus who came back from the dead? Believe on Him, trust Him as your Savior from sin and death, make Him the Lord of your life, and all the assurances previously mentioned shall belong to you.

[1] Miller, Keith "The Chain of Loving Memories that Binds Us to Those Long-Gone," keithmiller.com, 26, January, 2009, http://www.keithmiller.com/uncategorized/the-chain-of-loving-memories-that-binds-us-to-those-long-gone/

Scripture references are from the New International Version and the English Standard Bibles.