Rev. Mark H. Creech
Wit and wisdom
The death penalty and the woman caught in adultery

April 10, 2013
Last week lawmakers in the North Carolina Senate took steps to restore the death penalty in our state. North Carolina hasn't conducted an execution since 2006 due to legal challenges meant to create a de-facto moratorium.

Sen. Thom Goolsby, the primary sponsor of SB 306 – Capital Punishment/Amendments, the bill which passed the Senate on Thursday, rightly argued, "We have a moral obligation to ensure death-row criminals convicted of the most heinous crimes imaginable finally face justice. Victims' families have suffered far too long. It's time to stop the legal wrangling and bring them the peace and closure they deserve."

Goolsby stated the case quite eloquently, I believe. Yes, North Carolina has a moral obligation to proceed with executions.

Despite the fact that death-row inmates receive super due process of law that accounts for an average of 12 years of appeals, and that there exists no solid evidence of even one innocent nationwide being executed in over a hundred years, anti-death penalty advocates have had the upper-hand in the Tar Heel state. Unfortunately, many of those who have led the charge against capital punishment have been people of faith. But quite frankly, I believe their contentions have wrongly focused on the supposed rights of criminals and not the injury of victims. Moreover, they demonstrate a poor handling of biblical exegesis, claiming the practice is immoral and rooted in revenge.

Recently, in support of Goolsby's proposed legislation, I argued the primary purpose of the death penalty has never been about revenge, but instead about retribution. William H. Baker in On Capital Punishment has rightly noted:


"Retribution is properly a satisfaction or, according to the ancient figure of justice and her scales, a restoration of a disturbed equilibrium. As such it is a proper, legitimate and moral concept. Scripture makes a clear line of distinction between this doctrine and feelings of personal hatred by forbidding such feelings and the actions to which they lead. Capital punishment as a form of retribution is a dictate of the moral nature, which demands that there should be a just portion between the offense and the penalty." [1]


When I hear clergy argue against the death penalty I question if they understand that retribution is the primary purpose of the law, not rehabilitation, not even deterrence to criminal acts. The purpose of the law is to exact a penalty proper to the crime. A just God requires a broken order in the Universe be restored. Even Christ's death for the sinner was based on the need for retributive justice to satisfy the legal demands of a Holy God, whose law requires, "The wages of sin is death" (Rom. 6:23). Christ affirmed retributive justice by His own death on the cross. For the Bible declares, "While we were yet sinners, Christ died for us" (Rom. 5:8). The concept of retribution is a bedrock principle necessary to understanding justice.

Yet people like Jonathan Wilson-Hartgrove with People of Faith Against the Death Penalty, argue that when the question of capital punishment was put to Jesus regarding the woman caught in adultery, which was at that time a capital crime, Jesus repudiated it, saying, "Let whoever is without sin cast the first stone." Wilson-Hartgrove adds that Jesus clarified in that moment that "[n]o one had the moral authority to condemn a fellow human being to death." [2]

This is a good example of the poor kind of biblical exegesis about which I was writing earlier. There is nothing in this text that advocates Jesus was condemning the death penalty. In fact, we should understand that no one had a deeper respect for the law than Jesus. He kept both the spirit and the letter of it. And even when it appeared to some he was not scrupulously keeping the law, it always turned out that Jesus was correcting an improper interpretation of it. In the case of the woman caught in adultery, the scribes and Pharisees were not correctly applying all of the Law of Moses. The law required in such cases that more than one witness was necessary to invoke the death penalty (Deut. 17:6; 19:15), but the text provides no certainty as to the identity of the witness or witnesses. There may have been only one witness, thereby making the execution illegal. The law also required both the man and the woman be executed (Deut. 22:22). Yet the man was never brought forward. Therefore, obedience to the law in this instance would require releasing the woman.

Still, what of Jesus' words about "casting the first stone"? I think Paul Miller of Apologetics Press best answers that question, when he writes:

"Consequently, in the context under consideration, Jesus knew that the woman's accusers were guilty of the very thing for which they were willing to condemn her. (It is not beyond the realm of possibility that the man with whom the woman had committed adultery was in league with the accusing crowd.) Jesus was able to prick them with their guilt by causing them to realize that He knew that they, too, were guilty. The old law made clear that the witnesses to the crime were to cast the first stone (Deut. 17:7). The death penalty could not be invoked legally if the witnesses were unavailable or unqualified. Jesus was striking directly at the fact that the witnesses were ineligible to fulfill this role since they were guilty of the same sin, and thus deserved to be brought up on similar charges. They were intimidated into silence by their realization that Jesus was privy to their own sexual indiscretions." [3]

Moreover, the entire episode was simply a trap these religious leaders had set for Jesus. Their very objective was to get Jesus to repudiate the Law of Moses in some way so they could argue he was a false prophet. If Jesus had renounced the death penalty in this situation, he would have fallen into the trap these conspirators had set from him. Instead, however, he turned the trap on them and revealed the wickedness, the coldness, and the hypocrisy of their own hearts. 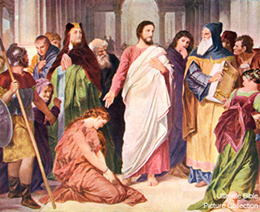 Later Jesus would ask the woman, "Woman, where are those thine accusers? Hath no man condemned thee?" (Jn. 8:10). In other words, where are the witnesses necessary to condemn you for your crime? When the woman said there were none, Jesus responded saying, "neither do I condemn thee" (Jn. 8:11), which was not some blanket or comprehensive unwillingness to judge or condemn a serious act of law breaking, but an acknowledgement that technically, legally, there were no witnesses to establish her guilt and thereby pass sentence.

"Go and sin no more" (Jn. 8:11), Jesus admonished the woman. Miller accurately writes concerning this statement, "Jesus was declaring the fact that the woman managed to slip out from under judicial condemnation on the basis of one or more legal technicalities. But He said (to use modern-day vernacular), 'You had better stop it! You were fortunate this time, but you must cease your sinful behavior!'" [4]

There is plenty in this text to make the case against the sin of self-righteously accusing or condemning others of something for which we ourselves are presently guilty. However, there is nothing in this text that rightly asserts Jesus was repudiating the death penalty. To argue this way from the story of the woman caught in adultery, sadly, is to create a pre-text that essentially implies no person has the right to judge anyone for anything. Because everyone is guilty of some sin or crime, therefore, no one has any moral authority to discipline – to punish – to levy jail time – to impose a fine, etc. This, of course, would be absurd; nevertheless, this is exactly where the argument logically ends.

God required the death penalty in the Old Testament, starting with Genesis 9:6. Jesus affirmed retributive justice by his own death on the cross. And the apostle Paul declared government "bears the sword" as "the minister of God" for good and is an "avenger who brings wrath upon the one who practices evil" (Rom. 13:4).

Justice has been delayed too long. The death penalty is right – it's moral – it should resume.