April 27, 2013
One time baseball great Joe Garagiola stepped up to the plate when his turn to bat came. Before assuming his stance, however, fervent Roman Catholic Joe took his bat and made the sign of the cross in the dirt in front of home plate. Catcher Yogi Berra, also a devout Catholic, walked out and erased Garagiola's cross. Turning to the astonished Garajiola, Berra smiled and said, "Let's let God watch this inning."

We laugh. But when it comes to the matter of politics, much of the church today, sadly, is divided into two separate camps. One group seeks to bring a Christian worldview to bear on the political process. The other group says the church needs to stay out of politics and just be concerned about winning others to faith in Christ.

The fact of the matter is the church should be doing both. Genesis 1:26-28 describes God's mandate that man, his vice-regent on the earth, given authority to rule in his stead, should build culture that reflects the character of God (Cultural Mandate). Commanded at the start of creation, this word from God has never been repealed. Matthew 28:19-20, which Christ gave at the dawn of the new creation, requires that the Gospel be carried to the ends of the earth (Great Commission).

In his book, Earth Restored, John Barber, I believe, best describes the relationship between the Cultural Mandate and the Great Commission. He writes, "God intends the Cultural Mandate to serve as His directive to redeemed man to maintain the order God placed in His world, better enabling all men to seek the truth. It is in this sense of upholding and conserving the creation in its balance and design, that the Cultural Mandate serves the Great Commission. For where there is lack of order, men are preoccupied with non-order. But where there is peace, men are free to discern the meaning behind their liberty. They are free to both hear and respond to the call of God upon their lives." [1]

In other words, evangelism – bringing people to Christ is the means by which redeemed persons are recruited to transform society – and the Cultural Mandate is the means of shaping society to produce the optimum opportunity for people to come Christ.

In his marvelous book, Why You Can't Stay Silent, Tom Minnery shares about a 1982 conference of conservative evangelical leaders that met in Grand Rapids, Michigan, and grappled with the need to "bring into balance the activities of social action and evangelism." [2] They determined that there were essentially three ways "social responsibility and evangelism dovetail with each other" [3]:
Minnery goes on to point out that engaging the culture for Christ's sake and demonstrating a sensitive Christian social consciousness can be controversial. For in seeking to relieve some human need there can also be the necessity of addressing the sinful causes of that deprivation. It may be important to be philanthropic, but it can also be just as important to address the corrections required to economic policy. Showing mercy can also demand a difficult and painful quest for justice. [7]

Deitrich Bohnnefer summed it up well, saying, "We are not to simply bandage the wounds of victims beneath the wheels of injustice, we are to drive a spoke into the wheel itself." [8] 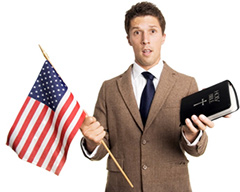 Indeed and this is why the world desperately needs zealous soul-winners that will compassionately engage the culture with the truth of God. Dr. D. James Kennedy used to say that the problem with liberal social action by mainline churches in the 1960s was that their efforts were little more than socialism with a religious veneer. Worst of all, their message didn't contain a clear teaching of the necessity of a personal relationship with Jesus Christ. But today, conservative evangelical churches have just the opposite problem, Kennedy asserted. They have emphasized the necessity of a personal relationship with Christ, while failing to sufficiently emphasize that their relationship with Christ should also result in actions to change the world for Christ.

Let's establish this fact clearly and without apology. The church must bring the influence of the Gospel to bear on every aspect of life, including the realm of politics, while also seeking to bring people to faith in Christ.