August 3, 2013
This week, North Carolina's Governor Pat McCrory, flanked by four security guards, walked through the gates of the executive mansion and over to a group of protesters who had been waving their signs and relentlessly yelling "shame" and "liar" toward his state residence for a couple of days. They were upset over the abortion bill that passed the General Assembly last week and his decision to sign it. To both the surprise and chagrin of the protesters, however, the Governor offered the ladies baked chocolate chip cookies, saying, "These are for you. God bless you. God bless you. God bless you." [1]

The Governor had already made it clear on a number of occasions the reasons he disagreed with the assertions of the pro-choice protesters. Nevertheless, he obviously respected them as fellow citizens and his simple act of giving cookies was not meant to be patronizing, but instead a gracious act of civility.

Tom Minnery who wrote the book, "Why You Can't Stay Silent," has eloquently stated: "To treat people with respect, especially people with whom one viscerally disagrees on a matter of abiding importance, and to act this way day after day, in the most distressing of circumstances, is no small accomplishment. It is not human nature to do this. But it is commanded in the New Testament. Not every politician who treats people kindly is a godly politician, of course. But the kind treatment of people is a godly trait, and many people find such traits to be useful, whether or not they honor the source of those virtues." [2]

McCrory's gesture was rebuffed by the lady protesters who didn't even sample the cookies, but instead placed them under the gate of the governor's mansion with a restatement of their demands, while insulting the Governor with a chant, "Hey Pat, that was rude. You wouldn't give cookies to a dude."

I think the women missed an opportunity to respond with civility and actually connect with the Governor. But instead they gave pause to all of us, making us question their mantra against Him and other pro-lifers, shouting, "shame, shame, shame." Really? Who should actually be ashamed of themselves here? 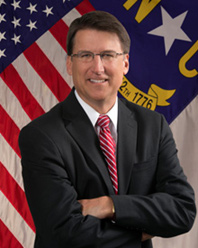 Perhaps these women could learn something from singer and song writer Emmy Lou Harris, who once said, "As citizens we have to be more thoughtful and more educated and more informed. I turn on the TV and I see these grown people screaming at each other, and I think, well, if we don't get our civility back, we're in trouble." [3] Indeed, enough screaming, enough yelling, enough chanting, where's the civility?

Civility, I suggest, is always in style, whether slighted or not, especially for the Christian. The Scriptures admonish, "Don't just pretend that you love others. Really love them. Hate what is wrong. Stand on the side of the good. Love each other with genuine affection, and take delight in honoring each other." (Romans 12:9).

[3] Cyran, Pamela. "Civility: 15 Quotes to Remind Us Why It Matters," The Christian Science Monitor, http://www.csmonitor.com/Books/2012/1024/Civility-15-quotes-to-remind-us-why-it-matters/Get-back