November 23, 2013
It was heartbreaking to learn that U.S. Rep. Trey Radel, a Tea Party favorite, was in a courtroom Wednesday answering to a misdemeanor charge for cocaine possession. Radel had been arrested as a part of a sting rooted in a broad FBI/DEA investigation of drug trafficking in the nation's capital. [1]

Radel's name will now be added to the long list of lawmakers and public officials who in recent years have been indicted for their misbehavior. Names such as Dan Rostenkowski who was charged with corruption, "Duke" Cunningham for bribes unparalleled in the history of Congress, James Traficant, Jr. for bribery and tax evasion, Bob Ney for conspiracy to commit fraud and mislead investigators, William Jefferson for bribery and corruption, "Scotter" Libbey for obstructing a federal investigation, Rod Blagojevich for 18 criminal counts including trying to sell the Senate seat vacated by President Barack Obama's election as president, and Jesse Jackson, Jr. for improper use of campaign funds. [2]

Added to these is the seemingly endless list of those involved in sex scandals, some of the most recent, which include Robert Dechiene, Chief of Staff to US Representative Steve Rothman, who was sentenced to 18 months for soliciting sex from a minor, Gen. David Petraeus who had an affair with his biographer, and Anthony Weiner, the Congressman that sent sexually suggestive photos of himself to women on his Twitter account. These are mentioned among a host of many others just within the last decade. [3]

Let's not forget some of the bigger names too like Nixon and Clinton.

And though he hasn't been indicted and isn't American, Toronto Mayor Rob Ford has taken up a good part of the news lately for his crack smoking and other antics.

The fall of leaders on such a massive scale is a sign of the times and unless we experience a moral and spiritual awakening, we are bound to an irreversible and catastrophic collapse as a nation.

The late Dr. D. James Kennedy once offered an explanation for the current situation. He argued:


"Today we are facing a 'crisis of character' that is undermining every aspect of American life. This crisis is so severe that it amounts to a 'new cold war.' And the ethical and moral fallout threatens not only our political, economic, and intellectual well-being, but our 'destiny' as a nation. It has been said that 'God is in the business of building character,' and that is true. But when any society chucks God out of its public life and slaps up a patchwork structure of humanism and idealism in the place of God, the soul of its people can only grow weaker and its character atrophy and die." [4]


The writer of the book of Proverbs said it this way, "When there is moral rot within a nation, its government topples easily. But wise and knowledgeable leaders bring stability" (Proverbs 28:2).

The current crisis in leadership is but a symptom of a much larger problem – the nation's wholesale abandonment of God and moral absolutes. We've put up with shenanigans at the top, accepting their unprecedented frequency with little outrage, because we've rejected God and His law in our personal lives, in our homes, and in our businesses. Whether we want to admit it or not, in a Representative Democracy our leaders are but a reflection of us.

The irony is that the people who originally came to our shores – the people whose contribution to our nation's history we celebrate this time of year – came to build a new nation firmly planted in the soil of faith, virtue, and ethical integrity. Their commitment to these principles were passed down to succeeding generations and would transform what was essentially a continent of barren wilderness to a world super power committed to the dignity of all men, liberty and personal responsibility.

Before real change, the kind that will move America forward again can be realized; we must see that as a people we've forsaken our charter. We must comprehend once again that character is everything. More important than even our intemperate handling of constitutional principles, is the supplanting of our Christian heritage for a more modern politically correct view – one that contends the folks who founded this country were basically imperialistic and corrupt – one that even indicts Christianity as the enemy of progress.

God help us. It's a lie of the tallest order – a lie told again and again by persons whose souls are so black they refuse to recognize great leadership; they refuse to accept orthodox Christianity, without dragging both through the mud of their revisionism. They would have us to embrace the very values and concepts our former leaders shunned and some of which shed their blood to fight.

But leadership isn't going to change for the better, until we change. When as a people we are sick and tired of sin in our own lives, when we hate those things God hates, we will no longer passively accept or tolerate the degree of degeneracy we see today in the lives of our leaders – people to whom we are right to apply a higher standard.

The late great Baptist preacher, Adrian Rogers once noted in a sermon the way young people back in the 60s used to strum their guitars and sing songs promoting God, country, patriotism, and other themes. One verse to a song they sang that Rogers said was especially relevant to our time, contended: 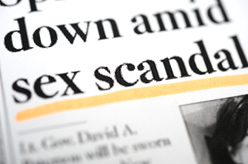 "You can't live crooked and think straight, whether you are a chauffeur or Chief of State." [5]

Rogers then went on to say the most patriotic thing any of us could do is to get right with God.

The crisis of leadership in our country demonstrates America is in desperate need of a great spiritual awakening. Without that awakening, America won't survive.

What about you? Are you sick of sin in your own life? Jesus said whoever comes to me, "I will in no way cast out" (John 6:37). Christ will forgive and transform your life. He'll give you the gift of everlasting life.

It may seem overly simplistic; nevertheless, repentance of sin and genuine faith in Christ is the hope of our personal lives, our families, and our government. Accepting Christ, embracing the terms of the Gospel, and selling out to God personally, will initiate the renewal of our land as a bastion of character and moral integrity from top to bottom.