November 28, 2013
Try to imagine this situation. It's been an exceedingly difficult year for you and your family. In fact, half of your relatives recently died. You've been living in a foreign land far away from home – essentially a wilderness you don't understand. You've faced real hunger. You've been cold and others in your community have had illnesses that have put everyone at risk. There have been no supermarkets to run to down the street. Inclement weather, as well as other hostile forces has stalked your every step. Not only have you had no health insurance, but there have been no emergency rooms, no hospitals, no doctors or nurses either. There has been no Coast Guard to air lift you out – no Red Cross to parachute food in to you.

Sounds like the episode of "Survivor" from hell. Let me ask, do you think in such circumstances you would be feeling very thankful?

Yet in a similar way this had been the plight of that little band of Pilgrims who gathered together with Indian guests for the New World's first Thanksgiving dinner. They had suffered incredible losses and their difficulties were life-threatening at every turn. Their table would have also been meager in comparison to our own today, but they possessed an indomitable spirit of gratefulness to God.

When writing his autobiography during the twilight of his life, G.K. Chesterton sought to define the most important lesson he had ever learned. He concluded nothing was of greater significance than whether an individual took things for granted or took them with gratitude. [1]

It almost goes without saying Americans have a propensity for taking too much for granted. In an article that was a response to the Occupy protestors movement a couple of years ago, Courtney Blair contended the protestors may have claimed to represent the grievances of the 99%, but with respect to the global income distribution Americans are the 1%. She wrote that "[w]ith more than a billion people around the world living on less than $1 per day," the Occupy protestors who were camping out on Wall Street were actually in better living conditions than most of the global poor. People even brought the Occupy protestors Thanksgiving dinner, she said. While the Occupy Philly protestors were postponing a move to a new site until they could ascertain whether they would have access to adequate electricity and water. [2] Again, we take too much for granted.


"When we sit around our tables laden with sumptuous delicacies, let us not forget that half the world will go to bed hungry. As we enjoy the comfort of our cozy homes, let us not forget that great numbers in other parts of the world have no home to go to. When we step into our sleek automobiles, let us not forget that most of the people in the world cannot afford even a bicycle. In the Lord's Prayer as recorded in the sixth chapter of Matthew, we read, 'Give us this day our daily bread.' Scripture teaches that the good things of this life are the gifts of God, and that He is the donor of all our blessings. Thanksgiving? Yes. Let us get on our knees humbly and thank God for the blessings He has given us, both material and spiritual. They have come from His hands." [3]


Many today are asking, "What's wrong with America?" A Rasmussen poll reported as late as last week that just one-in-four likely U.S. voters (25%) actually believes our country is heading in the right direction, meaning the vast majority of Americans believe we are going the wrong direction. [4] The problem, however, is that we continue to look for political solutions. This is not to be dismissive of the importance of politics, government, or public policy. Nevertheless, America's greatest and core problems are spiritual. We seem to have lost our concept of sin. We constantly affirm the so-called rights of men at the expense of God's rights. And as one great preacher put it, we've sold our birthright for a paltry bowl of humanism's pottage.

Real thanksgiving this season would not simply be to offer up an obligatory, "thank you." Instead it would be the recognition of our utter dependence upon God. Despite the fact our national motto still says, "In God We Trust," we seem to have lost much of our faith in Him.

We've done what the prophet Jeremiah accused ancient Israel of doing, "For my people have committed two evils; they have forsaken me the fountain of living waters, and hewed them out cisterns, broken cisterns, that can hold no water" (Jeremiah 2:13).

Apart from the national issue there is a more delicate question here. What about you this Thanksgiving season? Are you aware of how dependent you are on God for everything?

Centuries ago, the Duke of Wellington was about to pronounce a death sentence on a confirmed deserter. The great general struggled with the decision, saying, "I am extremely sorry to pass this severe sentence, but we have tried everything, and all the discipline and all the penalties have failed to improve this man who is otherwise a brave and good soldier." Then he gave the man's friends an opportunity to speak for him. "Please, your Excellency," said one of the man's comrades, "there is one thing you have never tried. You have not tried forgiving him." The general forgave the man and it worked: the soldier never again deserted and from thenceforth showed his undying gratitude to the Iron Duke. [5] 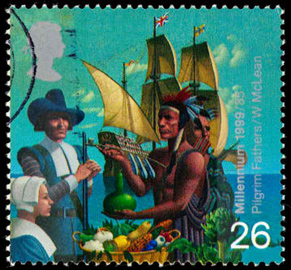 This blessing, the blessing of forgiveness is basic to the recognition of all life's other blessings. Without it, thanksgiving, and dependence on God can never fully follow. God made you and redeemed you in Jesus Christ. He wants to cleanse you of all your sins. He wants to spare your soul of the ultimate death – spiritual death. Have you received Christ? When we initially comprehend our spiritual need and cast ourselves upon the altar of God's grace and mercy, it is then with thankful hearts we are able to see in everything the divine.

That tiny lot of Pilgrims during the first Thanksgiving certainly teaches us one of life's supreme lessons. They showed us that during times of challenge, when matters appear to be failing and the darkness seems the greatest, the spirit that defies defeat is the one that takes nothing for granted and everything with gratitude. To be rich and without trust in God, is to suffer the worst form of poverty. To have faith in Him while suffering the most impoverished of circumstances is to be rich beyond degree. It is to enjoy the sweetest assurance of hope and the surest promise of becoming more than a conqueror. It is this spirit that laid the foundations for the American republic – one that would face seemingly insurmountable odds over and again, yet endure the centuries, change and bless the world. It is this spirit that can sustain its existence for time immemorial.

Thanks be unto God!

[2] Blair, Courtney. "Compared to the Rest of the World Americans Are All the 1%." PolicyMic, 6, December 2011 http://www.policymic.com/articles/2636/compared-to-the-rest-of-the-world-americans-are-all-the-1