Rev. Mark H. Creech
Lessons from the 'Tower of Babel'

March 15, 2014
The story of the Tower of Babel in Genesis chapter 11 is a historical narrative of the first recorded form of government gone awry. The apostle Paul wrote, "Now all these things happened unto them for ensamples: and they are written for our admonition, upon whom the ends of the world are come" (I Corinthians 10:11).

What are some of the principles in this account that forewarn us of the corruption of governments and their ultimate end?

First, beware of charismatic leadership that unifies the masses in rebellion to God. The Bible says Nimrod was "a mighty one in the earth" (Genesis 10:9). Evidently Nimrod gained his reputation literally as "a mighty hunter before the Lord," but the phrase in Hebrew is also given a religious connotation. In other words, he was an individual of incredible influence over the hearts and minds of people. His legacy was his ability to persuade the masses to build a culture where God was not a part of the equation – a society that had ruled God out of its thinking.

The Jerusalem Targum has stated:


God had instructed man to establish human government, but not the form prescribed by Nimrod.

Second, beware of governmental concentrations of power in rebellion to God. The Scriptures say that the people agreed to make a name for themselves, lest they be scattered (Genesis 11:4). God had commanded the people to disperse and colonize the whole earth and develop its many resources in a way that glorified Him. But their decision was to do just the opposite by concentrating power in the development of a self-sufficient man-centered culture in Babel. Their goal was a permanent union that not only failed to recognize God's order, but actively worked against it.

Third, beware of a false religious or moral premise that influences government in rebellion to God. The narrative in Genesis chapter 11 reveals the city of Babel was the symbol of the political unity of the people, but the tower was a symbol of their religious unity. "Let us build...a tower whose top may reach unto heaven" (Genesis 11:4). The idea here is not that the tower would actually reach into space or heaven itself. Instead, it would be a tower that would be topped by the heavens, that is, by the astrological signs of the zodiac. It would be dedicated to heaven and its angelic hosts.

In his book, The Genesis Record, Dr. Henry Morris argues that it's quite likely the building of the tower was originally presented under the guise of true spirituality. Morris writes:


"The tower in its lofty grandeur would symbolize the might and majesty of the true God of heaven. A great temple at its apex would provide a center and an altar where men could offer their sacrifices and worship God. The signs of the zodiac would be emblazoned on the ornate ceiling and walls of the temple, signifying the great story of creation and redemption, as told by the antediluvian patriarchs.

"These figures, which had once been designed only as symbolic representations on the heavens of the coming Redeemer and of God's great plan of salvation, now began to take on the aspect of actual spiritual entities. The Virgin, whose sign among the stars once reminded men of the promised Seed of the woman, began to assume the proportions of an actual Queen of Heaven; and Leo, the great sidereal lion at the other end of the zodiac, became a great spiritual King of Heaven. Soon the stars, the physical 'hosts of heaven,' were invested with the personalities of the angels, the invisible spiritual heavenly host." [2]


It's frightening when true religion or morality is co-opted for some wicked enterprise and denigrated to the point that its objective becomes exactly the opposite of what it was meant to represent. This is more likely the scenario that occurred in Babel. 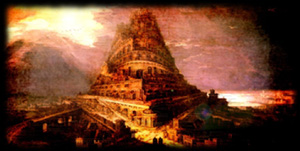 Genesis also says the Lord descended in judgment upon the scene. God is longsuffering and reluctant to supernaturally interfere in wrath, but He will never indefinitely stand for His purposes being thwarted. God confounded their language and forced the families of the earth to move away from Babel and accomplish what God had intended all along. That's the way it always works.

Many Bible scholars believe this very type situation will repeat itself in the last days – the day before Christ's return. A strong man will rise up, commonly believed to be the anti-Christ. He will unite the world in a cultural, political, and religious federation. As in Babel, the end will reflect a world determined to be rid of God.

Nevertheless, no matter what an individual's eschatological persuasion, the fact is, nations have seen this state of affairs occur throughout history over and again. And, it never ends well.

We're seeing it in America. A popular leader rises who is given almost god-like, messianic qualities by the media and others – one who single-handedly seeks to concentrate power – one the Christian Left and proponents of the erroneous doctrine of social justice treat as an anointed one. Our culture has largely abandoned trust in God for the opiate of government provision and hope, while endorsing via legalization abominable acts that God condemns.