April 12, 2014
Today conservative evangelicals are being told the fight to protect traditional marriage is essentially over. Many are saying we need to get on the right side of history or be left in the dust of irrelevance.

In a most eloquent article, Bryan Fischer of the American Family Association recently indicted a leading Southern Baptist leader, arguing this particular voice for the denomination, seemingly, was running up the white flag of surrender. The best evangelicals can do is negotiate the terms of their loss. Same-sex marriage proponents have triumphed.

"This is sadly a defeatist attitude for an evangelical leader to take," says Fischer, "particularly at a time when voters have gone to the polls in 31 states to elevate protection for natural marriage to their state constitutions. Only 4.5% of the American people live in states where voters have actually gone to the polls and voted to recognize same-sex marriage. It is absurd to believe that the battle is lost and that the debate is over."

Fischer's sentiments are also supported by a recent Rasmussen Poll that shows a tie in public opinion between supporters of same-sex marriage and opponents. That's far from the claims of the main stream media who have been saying for a long time the issue is simply moot at this point – public support for the redefinition of marriage is unquestionably settled.

Allow me to coin a new phrase in this debate. I contend these assertions by same-sex marriage proponents and their resulting negative influences on some in the evangelical camp are what we might call a "Tokyo Rose Effect."

During World War II, Iva Toguri, also known as Tokyo Rose, via a Japanese radio broadcast in English called "The Zero Hour," sought to demoralize American soldiers in the war effort. Over and again, she exercised a form of psychological warfare, telling soldiers they were "boneheads" for fighting. She would describe, quite unnervingly various units of the army and individual servicemen, saying it was useless for them to struggle anymore. She constantly urged them to surrender, even sabotage the war effort. The theme running through her egregious and incessant propaganda was to give it up, you've already lost – Japan's victory is inevitable.

May I suggest that's exactly what conservative Christians are currently experiencing in the fight to save real marriage – a "Tokyo Rose Effect." We've been hearing for so long the war to save natural marriage is lost, some are getting panicky – even some of our leadership appears to be embracing the notion – arguing we need to back off a bit and start approaching the subject with "finesse."

Finesse be damned. This is no time to retreat, regroup, or recant, this is the time to be good soldiers and hold the line. Future generations are depending on us. Not only is the fate of our country in the balance on this issue, but with America's strategic place on the globe so is the fate of the world.

Of course, I can hear the refrains: "Yes, but the courts are likely to find a constitutional right for same-sex marriage. If or when the US Supreme Court hears a case on the matter, it's likely to decide in favor of same-sex unions. The hand writing is on the wall."

My response: So what!!!! Can some black-robed, gavel pounding dupe, overturn the Judge of all the Earth? For a faithful evangelical Christian, God's ruling is the only one that will ever matter.

"But," they add. "What about the younger generation coming up the ranks? They're for same sex marriage. Their opinions on the issue show clearly this is not a fight that can be won." Again, so what!!!! I'm old enough to remember when young people were hippies and railed against the so-called establishment, only to find that after they grew up and attained a little wisdom they changed their minds and became the establishment they so vehemently protested. The future is not necessarily written by what we see now.

Granted, the light in America may grow exceedingly dim and true followers of Jesus Christ may anticipate having to endure a siege against righteousness. Serious, even devastating bouts of persecution may be in the future. But I suggest if we are not willing to uncompromisingly continue the fight for God's primary vehicle for evangelism – a home with both a female mother and a male father bound together in holy wedlock – then we are not worthy to even name Christ as Lord. 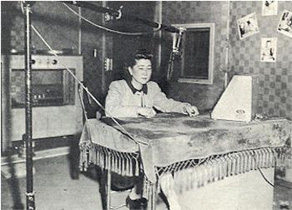 We should be encouraged by a promise from Jesus. When Jesus said the gates of hell could not prevail against His church (Matthew 16:18), He wasn't, as some have mistakenly interpreted, speaking of the church in a defensive context. He was speaking in the framework of its offense. In other words, in the text it is not the gates of the church which are under attack, instead it's the church attacking the gates of hell. What greater promise of victory could possibly be given?

Do we really believe Christ? Or, do we intend to listen to the spies who have come back from the Promised Land and contended the giants are too big to overcome? Will we, and the generations that follow us, be left to wander in the wilderness because of our unbelief?

God forbid. Let's not be sidelined by a "Tokyo Rose Effect."