Rev. Mark H. Creech
'Heaven is For Real': NDEs cause for much speculation

April 20, 2014
My wife and I walked into the dark theatre near the small town where we live. As we walked up the elevated floor with the large screen in sight, we rounded the corner toward the seats to discover the theatre was nearly full. That's typically not the case when we've gone to see other movies at this same theatre. I said to Kim, "Wow, it appears the after-life is a matter of great interest."

The film we had gone to see was, "Heaven is For Real." It's the story of a little boy who at the age of four claimed to have had a near death experience, visited heaven, and met some of his deceased family members, as well as Jesus.

Having also been familiar with the book on which the movie was based, I found the story compelling. I personally have no reason to doubt anything about the reality of what the child confessed to experiencing. But that doesn't mean I accept the testimonials of all near death accounts.

Some people who reject Christ and have lived sinful lives say they have known this same phenomena when nearly dying. They report having experienced pleasure, elation and total love. Others tell of their event in the light of some heretical spiritual teaching. These statements just don't square with the Bible's declarations about the end of life for those who spurn God's offer of grace.

Nevertheless, due to the advances in modern medicine, numerous people, more than ever before, are being revived and pulled back from the jaws of death. When some of these people come back, they have amazing stories to tell.

When serving as a pastor I heard some of these stories first hand. One of my own parishioners died on the operating table and was brought back. He said he went to a marvelous place and knew that he was in the presence of God. He could never fully talk about the matter because he would end up being overcome with emotion. He would always apologize, saying it was too powerful to describe.

On another occasion, a fellow believer who was a friend of mine was involved in a terrible head-on car collision. No one witnessed the crash when it happened and the person in the other car was killed. While in the hospital and his life hanging by a thread, my friend regained consciousness. His mother sitting next to his hospital bed asked, "What happened?" He replied, "I don't know mother, but I know how I got here." She responded, "What do you mean?" He then pointed to both sides of the head of his bed and said, "These two angels brought me." Quickly thereafter, he lost consciousness again. And, he could never remember anything about the crash.

On a lighter note, my own father had a cardiac arrest when he was in his 50s, experiencing what doctors call "sudden death." What happened was so remarkable the Raleigh News and Observer covered the story as front page news. He was technically dead for 20 minutes – no pulse and no heart-beat. Paramedics and a cardiologist who just happened to be near him at the time sought to revive him and did. Although the brain is typically irreversibly damaged in five to ten minutes, my father came back with a completely sound mind and would live a relatively healthy life for more than 18 years. It was a miracle. When a reporter asked my father if he had a near death experience, he humorously replied, "No, and I didn't see Elvis either." He remembered nothing about the events surrounding his heart attack.

So how do we explain these stories? They're often as unique as the individuals who have them, many of them contradictory to each other. And, everybody can't be right – all of them can't be true. There is only one way to properly understand these narratives and that's to weigh them in the balance of Scripture and not experience.

There are numerous accounts of people who died and came back to life in the Bible. There are three stories in the books of I and II Kings. There are seven stories in the New Testament – all found in the Gospels and the book of Acts.

But perhaps the closest description of a near death experience is the record of Stephen, the Christian martyr's stoning. While being stoned to death and his life ebbing away, he testifies that he sees heaven opened with Jesus standing on the right hand of God. He cries out to Jesus to receive his spirit into heaven. But then asks the Lord to forgive his persecutors.

Some might argue, however, that Daniel, Paul, John and Stephen's dramatic encounters with eternity were not near death experiences, but only visions of the here-after.

We should also be wise to the fact that Scripture refers to the devil as "the father of lies" (Jn. 8:44) and "an angel of light" (II Cor. 11:14). This means he can certainly use a near death experience as a way of not only deceiving the individual who has one, but also many others who might believe their yarn. 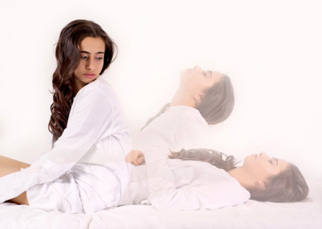 The only sure word we have of life after death is in the written Word, the Bible, and the living Word, Jesus Christ. The written Word over and again describes heaven as a place, not just some sort of cosmic consciousness, but a real place where people actually dwell forever in the bliss and peace of a glorious eternal kingdom – a place that Jesus reigns – a place where there is no death, no sorrow, no pain and no sin – a place where all wrongs are made right. Moreover, the Bible describes a Savior, a physical expression of God Himself, Jesus Christ, who by his life, death and literal resurrection from the dead dispels death's doom.

I like the way author Brian Harbour once said it, "Jesus was put to death on a Roman cross and laid in the tomb. Then, on the third day, Jesus broke the bonds of death and stood on his feet again, alive!...In the resurrection, Jesus knocked both ends out of the grave and transformed death from an alley with no exit into a thoroughfare from earth to heaven."

Near death experiences may be the cause for much speculation. However, the resurrection of Jesus, certainly the most attested historical event in human history, is proof there is life beyond the grave. What is more, it is a promise – a promise of the believer's own resurrection – a promise of eternal unspeakable joy for those who believe in Christ and follow Him all the way to the end.