May 31, 2014
I once read where the proprietor of a business shared a hypothetical with his staff. He said, "Suppose a young man was to buy a very costly diamond ring and send it to his fiancée, putting it inside a little case that the jeweler threw in for free. Imagine how disappointed and dismayed he might be if, when meeting her several days afterward, she said, 'Sweetheart, that was an beautiful box you sent to me. I loved it so much that I promise to keep it wrapped in a safe place so that no harm should ever come to it.'"

"Outrageous, you might think. She neglects the diamond for the little box that contained it. Just as foolish," said the proprietor, "are those who spend all their time and thought on matters that pertain to the body, which is only a case containing the diamond, the real self, the soul, which the Scriptures teach persists long after the body crumbles to dust."

Jesus spoke of our proclivity to live in this fashion. He said, "Man shall not live by bread alone, but by every word that proceedeth out of the mouth of God" (Matt. 4:4). He asked, "For what shall it profit a man, if he shall gain the whole world, and lose his own soul?" (Mark 8:36). In his parable of the rich fool, Jesus talks about a man who invested his entire life in his estate, but neglected matters of the soul, only to enter into God's presence unprepared to meet him and his judgment (Luke 12:13-21). [1]

This frailty is reflected on numerous personal levels. But it is also seen in our national life in the way we concentrate so much time and energy on issues that impact the economy, forgetting the necessity of commitment to strong values that sustain and make an economy prosper.

Few people ever question why Western Civilization has experienced so much abundance in comparison to poorer nations around the world. The reason is inextricably connected to Christianity. The Bible says, "As a man thinketh in his heart, so is he" (Prov. 23:7). What individuals believe, what nations believe has everything to do with their essence and determines whether they grow, multiply, and succeed.

I served as a short-term missionary to India on three different occasions and saw this principle worked-out first-hand. India's economy has been stagnated for centuries. Though I do not mean to disparage that beautiful country, it cannot be denied the two prominent religions, Hinduism and Islam, hold the nation back. Hunger is rampant in India, but not because they don't have enough food. Hinduism teaches that people who die come back as animals. There are plenty of cows and pigs that roam the streets freely, but no one will slaughter them, even if their child's belly is bloated with malnutrition. Moreover, two hundred million "sacred cows," eat up enough food to feed seven people, taking enough sustenance that could feed as many as 1.4 billion. Neither will they kill the mice and rats that devour much of the grain. [2] For those who have embraced Islam, the fatalism of that religion stifles human progress by telling them Allah has fated all that there is and human initiative amounts to nothing. False religion has a stranglehold on their hope for a better future.

So the affluence of a people doesn't simply rest with the presence of natural resources as many seem to think. There are plenty of countries that have considerably less natural resources that are more prosperous than those who have more natural resources, but are still not as prosperous. The factor determining wealth is connected more to a people's belief system than anything else.

The numerous ways adherence to Christian principles has catapulted the West forward economically are too many to mention in an article as short as this one. Nevertheless, author John Chamberlain in "The Roots of Capitalism" touched on some of the most important in the following quote. He wrote:


"'Thou shalt not steal' means that the Bible countenances private property – for if a thing is owned in the first place it can scarcely be stolen. 'Thou shalt not covet' means that it is sinful to even contemplate the seizure of another man's goods – which is something Socialists, whether Christian or otherwise, have never managed to explain away. Furthermore, the prohibitions against false witness and adultery mean that contracts should be honored and double-dealing eschewed. As for the Commandment to 'honor thy father and thy mother that thy days may be long,' this implies that the family, not the State, is the basic continuing unit and constitutive element of society." [3]


In other words, Chamberlain is saying Christian character is the very foundation for fortune. 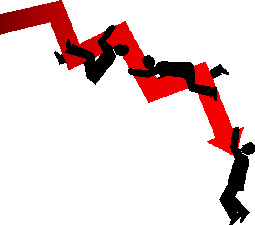 In 1992, James Carville coined a campaign slogan for Bill Clinton's presidential run, "It's the economy, stupid." That phrase has long represented the current emphasis. Whether personal or national, it's the pursuit of gain devoid of the chase for moral strength that's driving us closer and closer to economic despair.

We love our little boxes, but not the diamond of a right relationship with God. We cannot serve both God and money, either we will hate one and love the other (Matthew 6:24). May God grant us to see our greatest need for economic reform is directly related to our need for transformation of the soul.

[1] Laidlaw, Robert A. The Reason Why. Murfreesboro: Sword of the Lord, n.d. Print.