July 4, 2014
About a year ago, I stood on the deck of one of America's great naval vessels. When I looked up, I noticed the flag was not flying proudly, but twisted in the rigging. As I pointed this fact out to someone else on board, he said to me, "Yeah, I think it's symbolic of the way our country has become twisted in recent years."

We are all too aware of our nation's many problems. An evangelist wrote to me this week: "I love this time of year as much as I love any of our national holidays. It is a time of serious reflection and soul-searching...As never before we are at a crisis point! We have a President who is wielding unprecedented executive authority, thumbing his nose at the Constitution. Simultaneously, we have a Congress who seems unwilling, or unprepared, to stop him. The almighty dollar seems to be that for which men are willing to sell their souls. Integrity is at its lowest ebb, and acknowledgment of God is significantly waning. Lying is the norm, and the courage of conviction seems almost stunningly absent." My evangelist friend was spot on in his analysis.

As we approach the July 4th weekend, however, let's strike a positive chord for America. As bad as things are, let's not forget we still live in the finest country in the world. And even though the ungodly are having a field day, we should remember the optimism of the Psalmist who admonished:


"Do not be agitated by evil doers; do not envy those who do wrong. For they wither quickly like grass and wilt like tender green plants. Trust in the Lord and do what is good; dwell in the land and live securely. Take delight in the Lord, and he will give you your heart's desires. Commit your way to the Lord; trust in Him, and He will act, making your righteousness shine like the dawn, your justice like the noonday" (Psalm 37:1-6; HCSB).


How is it that we can affirmatively live out these words in a country overrun by wicked influences? How can we start to experience a positive difference for today and tomorrow?

First, we should take time to celebrate our nation's founding with patriotic fervor. Interestingly, the day after the signing of the Declaration of Independence, John Adams reflected on our nation's historic resolution of liberty, saying it should be "celebrated by succeeding generations as the great anniversary festival. It ought to be commemorated as the day of deliverance, by solemn acts of devotion to God Almighty...from one end of the continent to the other; from this time forward forever..." [1] To celebrate our nation's birth properly requires serious reflection about the source of our freedom, our country's place in the world, and the necessary sacrifices of a free people.

Yet, celebration also includes the joyous revelries of parades, picnics, ball games, and, of course, fireworks. American humorists, Erma Bombeck once penned, "You have to love a nation that celebrates its independence every July 4, not with a parade of guns, tanks, and soldiers who file by the White House in a show of strength and muscle, but with family pictures where kids throw Frisbees, the potato salad gets "iffy," and the flies die from happiness. You may think you have overeaten, but it is patriotism." [2]

Indeed, we have every reason to celebrate with fervor and frivolity. And, we should. It's our patriotic duty. Despite all of our afflictions, people still run to this country and not from it. Observing what's right about America can be a good step toward righting what's wrong.

Second, we should cultivate in life the things that really matter. Certainly this is a day of many distractions. We may be living in a difficult economy at the present, but by most world standards even America's poor are incredibly rich. We have almost every luxury at our fingertips. So it's easy to forget what really needs to be cultivated in life.

To the surprise of many, it's not money, the economy, or our standard of living that truly counts. Instead it's our relationship to the God of the Bible and His Son, Jesus Christ, character, family life, and love for one's neighbor. These are what made America an exceptionalist nation and generated her freedom – a freedom that has spread around the globe. To neglect these more important issues is to jeopardize liberty's underpinnings. 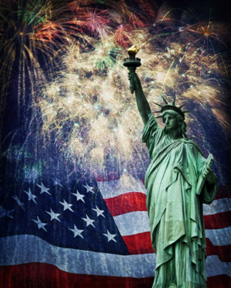 No matter how negative the times we live in, nothing is more positive for the entire world than an upright, godly, just, faithful follower of Jesus Christ who walks in the light of God, and leads others to do the same. Fortunately, there remains a remnant of such people throughout our land, and, but for that remnant a final judgment for national sin has yet to occur. If our nation is ultimately to be saved from its maladies and misfortunes, many others will also need to follow Christ.

That brings us to the third and last point. We should embrace the Gospel of Jesus Christ. It must be remembered that at the heart of civil liberty is the need for internal liberty. Man lost his ability to govern himself by rejection of God's law. He became a slave to sin. But through the sacrifice of Christ on the Cross, the power for self-government is restored for everyone who puts their trust in him. Civil liberty is based and sustained in self-government. Self-government is possible only as men submit themselves to God. Thus, the statement of William Penn: "If we will not be governed by God, we must be governed by tyrants." [3]

Indeed, these are dark days for America, but the situation also presents an opportunity to experience the power of Christ. The message of Jesus Christ speaks to the deepest longings of the human soul. Our nation is looking for hope – real hope. Dr. Billy Graham has written, "Hope will accompany us through our uncertain tomorrows if we will receive, by faith, the God of hope." [4]

While not ignoring the great problems in America, we need a positive word. That word is that we still have reason to celebrate our marvelous heritage. We can still secure our future by devoting our attention to the things that actually matter. And, Jesus still saves.