October 5, 2014
It may come as a surprise for many, but just within the lifetime of most Americans, legal casino gambling existed in only two places in our nation: Nevada and Atlantic City, New Jersey. Starting in the 1990s, casinos began spreading across our country at break-neck speed. Today, at least 23 states have commercial casinos, a category that includes land-based, riverboat, dockside, and race track casinos. In the Mid-Atlantic and Northeast, nearly every adult lives within a relatively short distance to a casino. [1]

North Carolina is not exempt from the spread of this insidious industry. Harrah's has one casino on the Cherokee reservation in western North Carolina. A new gambling compact approved in 2012 by then Governor Bev. Perdue, guarantees they can build more. And now, the Catawba Indians have petitioned the federal government to place 16 acres off Dixon School Road in Kings Mountain into a trust for a $340 million complex to include a 220,000-square-foot casino in that location.

Taylor Branch, a Pulitzer Prize winning historian of the Civil Rights Movement and biographer of Martin Luther King, Jr, once described state-sponsored gambling as "a corruption of democracy." "It violates the most basic premises that make democracy unique: that you can be self-governing, you can be honest and open about your disagreements as well as your agreements, and that you trust other people – that you are in this together. That's what a compact of citizens is. And the first step away from it is to play each other for suckers. We're going to trick them into thinking they are going to get rich, but they are really going to be paying my taxes." [2]

Kings Mountain and Cleveland County residents are already witnessing the way gambling can corrupt, even if it hasn't arrived on the scene.

In April, the Christian Action League reported that both the City Council and County Commissioners had admitted they signed letters of support for the casino without ever investigating its potential impact beyond the sales pitch of casino promoters. [3]

I have been privileged to live in Kings Mountain since 2005 and in the greater Cleveland county area for an additional five years. Since moving here, I have enjoyed learning of the historical significance this area played during America's war for independence.

Kings Mountain is a proud city. We are proud of our heritage of standing up for what we believe. We are proud of the victory gained over a form of government that repressed the people, and failed to represent the interests and safety of the local community.

Yet, in recent history, this council has chosen to go against this proud heritage, and has chosen to act in a way that does not represent the citizens of this community. Consider these numbers:

There have been 74 Regular City Council Meetings from July 2008 to August 2014. In those meetings, over the course of six years, the council has been addressed 112 times by citizens, in the citizen recognition portion of the meetings.

In the course of the last six years, more than 66 percent of the times that citizens have addressed this council for any reason, they have come to express their concern regarding businesses which make a profit by preying on our citizens. This council claims to represent the citizens of Kings Mountain by, quote, "enthusiastically and emphatically expressing our strong support" of the casino.

Yet, over two-thirds of the citizens who have addressed this council in the last six years are concerned about the affects businesses such as this casino will have on our community. This community most definitely DOES NOT enthusiastically and emphatically express our strong support of this casino. The opposite is true.

In a few days, we will celebrate the 234th anniversary of the Battle of Kings Mountain, in which men fought and died to win freedom from a government that refused to represent their interests. I believe it is a mockery for this council to proclaim our proud heritage on one hand, while refusing to factually represent our citizens on the other hand.

I would remind you of these words that motivated our forefathers: "All men . . . are endowed by their Creator with certain unalienable Rights, that . . . to secure these rights, Governments are instituted among Men, deriving their just powers from the consent of the governed . . . "

Mr. Mayor, City Council. I am grateful for the opportunity to speak here tonight. But you have not given me this opportunity. This is my right as a citizen. Rather, your opportunity to sit on that bench has been given you by we the people, and you serve at our pleasure. When we as citizens take time to come before you to express our concerns, we are not keeping you from your work. We are giving you information that is vital in order for you to do your work.

Withdraw your letter welcoming the Catawba Casino to our area. Issue a letter to the Bureau of Indian Affairs, informing them that your constituents are against this proposed casino. Begin to "enthusiastically and emphatically" express your strong support for the citizens of this community, rather than for an outside organization whose business model can only wreak havoc on the life, liberty, and happiness of the citizens in this community. 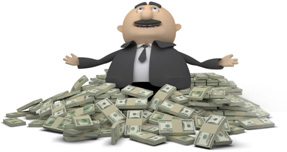 This is surely what gambling does. Those who favor and entertain it become blinded and corrupted by the spirit of covetousness. In this case, leaders in Kings Mountain and Cleveland County can't see what their constituents really want for the perceived promises of dollar signs obstructing their vision.

In his book, What if America Were a Christian Nation Again, the late Dr. D. James Kennedy noted that "[t]he greatest example of this in history is the picture of the Roman soldiers – the gamblers at Golgotha – surrounding the cross of Christ. They are down on their knees with their faces to the mud, casting dice for the garments of Christ, while above them the savior of the world is dying. Gambling has a pernicious effect upon people in every conceivable way." [4]

We should pray that God would remove the scales from the eyes of these local leaders. Moreover, we should pray that God would give grace for all to see that gambling is a cancer, eating away at our integrity – eating away at our most fundamental values – that we shouldn't live by bread alone, we shouldn't see life consisting only in the things we possess – that we can really trust one another – that we really should love our neighbor as we do ourselves. Gambling degrades the soul of a state and nation.