Rev. Mark H. Creech
The parable of the senator's choice

November 1, 2014
A senator's soul arrived in heaven and was met by St. Peter at the entrance. "Welcome to heaven," said St. Peter. "Before you settle in, it seems there is a problem. We seldom see a high official around these parts, you see, so we're not sure what to do with you."

So, St. Peter escorted him to the elevator and he went down, down, down to hell. The doors of the elevator opened and he found himself in the middle of a barren land with a dark, ominous and foreboding sky. The heat was exceedingly oppressive. He saw all his friends dressed in rags, some naked and unclean, many pulling around the chains of their former vices in life. 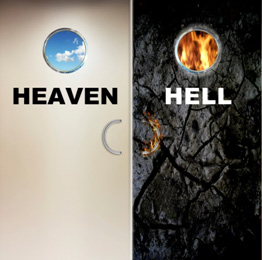 The irony of hell is that it is the culmination of everything we ever really wanted and the just deserts of our actions. It is the harvest we sowed on earth. The message of judgment is that in the end, none of us ever gets away with anything.

No one, however, has to go to hell. Christ died to redeem us from the threat of eternal punishment. He suffered hell for us on the cross – taking our punishment on Himself. But we have to make a choice. We have to vote.

We have to choose between Him and our sin. We can trust Him and be changed and given a new heart for what God wants for us, or we can reject Christ and go on in our own way. Every person faces this choice in their lifetime. This decision determines where we ultimately spend eternity.

How will you choose? Vote Christ! Decide for Him!