December 19, 2015
Recently, WTVD News ABC 11 for Raleigh-Durham reported that the mayor of Franklin, North Carolina, Bob Scott has a long tenure of public service. He was in the Army as a public affairs officer. He flew in the Civil Air Patrol. He spent ten years on the Franklin Board of Alderman.

Each time he was sworn into office he placed his left hand on the Bible to take his oath. But this year, which will make his second term as Franklin's mayor, he decided to do something different. He decided he wouldn't use the Bible, but instead swear upon a copy of the Constitution.

According to WTVD, Scott said that he had been thinking about the matter for a long time. "I realized we are taking an oath to defend the Constitution, pure and simple, and those are the laws of the land. And If I'm gonna give an oath, that's what I'm giving an oath to. It had nothing to do with religion – for or against – just swearing to protect and defend the Constitution," said Scott.

Regarding the office of any public official, Scott also said, "We do not represent any religion, what we represent are the laws of the land. As far as I am concerned, there is no place in government for religion. I'm a secularist in that respect. I just don't think there's a place for any kind of religious doctrine in government because we represent everybody."

The woeful ignorance of Scott's view is breathtaking. You can no more separate our nation's form of government from the Christian religion than you can separate smoke from fire or water from ice.

Granted, at the start of our fledgling republic, there was a severing of the politico-ecclesiastical ties that had long existed between the church and state. But the separation of the two did not mean the severance of our way of government from God, or from its basis – the Christian religion. As John Quincy Adams, the sixth president of the United States stated, the American Revolution connected in "one indissoluble bond the principles of civil government and the principles of Christianity."

This fact is voluminously evident in such matters as the biblical worldview that shaped the resistance of the colonists to King George's tyranny, the Declaration of Independence's references to "Nature's God," the "Creator," the "Supreme Judge of the world" and its signers acknowledgement of "a firm reliance on the protection of Divine Providence." This is not to mention the repeated presidential and congressional calls for prayer and days of fasting in periods of great national challenges throughout American history.

Scott may claim that there is "no place in government for religion," but even something as simple as the concluding words of our National Anthem summarize the United States was birthed out of a religious commitment – out of a commitment to God.


"Blessed with victory and peace,
May this heaven rescued land
Praise the Power that hath made
And preserved us a nation!

Then conquer we must,
When our cause is just;
And this be our motto:
'In God is our trust!'

And the star-spangled banner in
Triumph shall wave
O'er the land of the free,
And the home of the brave."
Scott may have chosen to take his oath on the Constitution, but neither can he remove that great document from its Christian influences. Stephen McDowell and Mark Beliles, in their book, Liberating the Nations, point out that James Madison, who has justly been referred to as the "Father" of the US Constitution, was a tremendous Christian statesman that delineated the biblical responsibilities of government in its preamble:
No wonder Noah Webster said, "The religion which has introduced civil liberty is the religion of Christ and his apostles...to this we owe our free constitutions of government."

Moreover, these are some of the same reasons, George Washington in his farewell address warned: 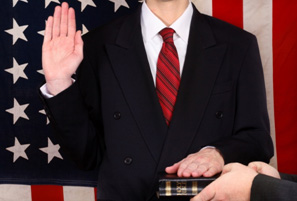 "Of all the dispositions and habits which lead to political prosperity, religion and morality are indispensable supports. In vain would that man claim the tribute of patriotism, who should labor to subvert these great pillars...The mere politician, equally with the pious man, ought to respect and to cherish them. A volume could not trace all their connections with private and public felicity. Let it simply be asked where is the security for prosperity, for reputation, for life, if the sense of religious obligation desert the oaths...? And let us with caution indulge

the supposition, that morality can be maintained without religion...Tis substantially true, that virtue or morality is a necessary spring of popular government."


Mayor Scott certainly has the right to reject putting his hand on the Bible when taking his oath of office, but his choice sends a dangerous message that places every citizen at risk. His actions declare the erroneous notion that our rights come from the state – not God.