December 23, 2015
Why would God wrap himself in human flesh to dwell among men? Some would argue that he did it to save those who are lost in sin. Some would contend to destroy the works of the devil. Others would say to establish justice and peace throughout the world. Each of these responses would be correct, but few would mention Christ came to lay down the means for external political freedom.

In the third chapter of the book of Genesis is seen the fall of humanity. When Adam and Eve rebelled against the will of God, man lost his ability to be self-governed. Thenceforth, history demonstrates one form after another of external governmental tyranny.

Christ restores the potential for man to govern himself once again under the authority of God. Thus, the pathway to political liberty is from the internal to the external. Look carefully through the annals of history and it will be discovered that only where Christianity in its purest form has flourished have people truly been free.

Stephen McDowell and Mark Beliles have beautifully expounded upon these truths in their book Liberating the Nations. They write:

Just a few days ago, I came across something written by Dr. Brian Harbour about this season of the year that especially caught my attention. He said:

"Ironically, in our day when the watchwords are freedom and liberty, man is more in bondage than he has ever been. We were created to express our consciousness through prayer, to extend our hands in service, to express our thanks with joy, to expend our energies with wisdom, to exemplify our love by deeds. But our prayers have been silenced by our sin, our hands of service bound by our selfishness, our joy eclipsed by our sorrow, our energies stifled by our slothfulness, and our deeds of mercy eliminated by our self-centeredness.

"In the Christmas season, we are reminded again of a peace we do not experience and a joy we do not feel and a brotherhood we do not have. More so than at any other time of the year, Christmas confronts us with the reality of our bondage. Above the muffled carols and the mock hilarity of the season, there sounds the agonizing cry of the multitudes in their sin: 'Wretched man that I am! Who will set me free from the body of this death' (Rom. 7:24)? Who will liberate us from our bondage?'"

Harbour penned those words in 1982, but more than 30 years later they are more pertinent than ever before.

Most polls show that Americans believe our nation is on the wrong track. Still, instead of looking within to discover the problem, we have looked outside of ourselves. It was the same response from Adam and Eve when they lost their first estate; the man blamed the woman, and the woman blamed the serpent.

Today liberty is in jeopardy more than ever before. Never has there been a time when there was more lawlessness in both public and private life. Our economy is in tremendous peril. One by one our constitutional freedoms are shredded. Sinister foreign powers driven by dangerous ideologies threaten to overpower us.

More than two millennia ago, we can see a rebuke to our nation in the circumstances surrounding Christ's birth. God appointed the Son of God both an earthly mother and father to keep and raise Him to adulthood. Poor shepherds found hope for their plight in the Christ-child, not the state. Wise men and potentates sought Him out and acknowledged His Lordship.

Let people pontificate erroneous notions about "separation of church and state," and the alleged value of a government devoid of religious influence, more specifically Christian influence. It remains a constant, however, that internal or external freedom is impossible outside that great Emancipator who was born of a virgin, wrapped in swaddling clothes, and lay in a manger. 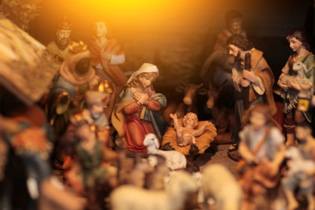 By Christ's life, sacrificial death and resurrection, freedom was purchased for all who will repent of their sins and believe. This current generation of Americans needs a great spiritual awakening that turns the feet of the masses in haste to Christ before freedom is lost forever.

We would do well to heed the words of the marvelous prince of preachers, Charles Spurgeon, who during the 19th century wrote:

"Mark thee, man! If thou wilt come to Christ thou shalt be free this moment from every sort of bondage; but if thou wilt go hither and thither, and try this and that and the other, thou shalt find all thy tryings end in disappointment, and thou shalt lie down in sorrow and in shame; for none but Jesus – none but Jesus can make us free indeed. Real liberty cometh from him only."

Yes, it is only free hearts that may enjoy and sustain the fruit of a free nation.