Rev. Mark H. Creech
A Christian in spite of everything

January 16, 2016
Maxine Marsolini says in Blended Families, "Revisiting the past...is a privilege. When we look at it as a healthy thing, we are able to appreciate what it has to offer. It brings defining insight to the present." [1]

Such defining insight was exactly my experience recently when reading a sermon written by the late Southern Baptist, J.D. Grey, titled, A Christian in Spite of Everything. The message was written 57 years ago.

In it, Grey chooses for his text a rather obscure passage by the Apostle Paul, which he defines as a "bright gem of Christian encouragement in a setting of pure gold." The text, Philippians 4:22, reads: "All the saints salute you, chiefly they that are of Caesar's household."

Grey points out that the epistle of Philippians was written by the Apostle while he was in a prison near the imperial palace in Rome and during the reign of Nero. Nero was despotic, ruthless, and the most corrupt of Roman emperors. He burned a large portion of the city of Rome and then blamed it on the followers of Christ to turn suspicion away from himself. Persecution of believers was intense during his reign. Nero would illuminate his grounds at night by burning Christians. In the text, says Grey, Paul makes a salutation on behalf of a group of believers living in the palace of this cruel emperor.

Grey continues by touching on some areas; I believe need to be reinforced in our own day – a time when his sermon, seems more relevant than when it was first delivered in 1959.

"Now to begin with," he writes, "in looking at the matter of being a Christian in spite of everything, let us remind ourselves over and over again that it is not now, it never has been, and it never will be an easy thing to be a Christian of the right sort."

"God has not promised us that we shall be 'carried to the skies On flow'ry beds of ease, while others fought to win the prize And sailed thro' bloody seas.' The Master well reminds us in the Sermon on the Mount, in Matthew 7:14, that 'strait is the gate, and narrow is the way which leadeth to life, and few there be that find it.' No, we are not going to have an easy time living the Christian life. The devil is going to see that our way is rough. A Christianity that is of the right sort – in other words, the sort that is genuine, the kind that is New Testament Christianity – will call upon us to bear crosses and to 'endure hardness, as a good soldier of Jesus Christ,'" says Grey.

Grey's words throw light on the easy Christianity of too many professing Christians today, which is more reflective of the world's values than the counter-cultural principles advocated by the life of Jesus and the Scriptures.

They are reminiscent of another great orator, John Henry Jowett, who once admonished, "The multitude is not sick of Jesus; it is only sick of his feeble and bloodless representatives. When once again a great church appears, a church with the Lord's name in her forehead, a church with fine muscular limbs, and a face seamed with the marks of sacrifice, the multitude will turn their feet to the way of God's commandments." [2]

Grey adds that if we are to be Christians, made of the same cloth, as those who lived in Nero's palace, we will have to expect ridicule. "Ridicule is often the devil's most effective weapon," he says.

The saints in Caesar's palace likely faced it every day. Grey argues:

"I doubt not that they were told over and over again, 'Why, this illiterate carpenter of Nazareth was nothing but a deceived maniac who had great obsessions of grandeur. He met death himself. Many of his followers have been killed. This which he has started will soon play out; why waste your time with it?' And I can see those Christians going on their way, smiling at their critics, but turning their tear-stained faces toward the risen Christ and pledging him anew their deepest loyalty and devotion. They evidently had as their motto the words of the wise poet who said, 'Go on thy quiet way; God is thy Judge – not they; fear not! Be strong!'" 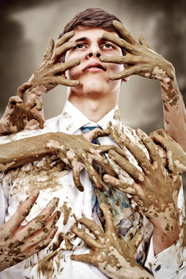 Constantly I am in conversations or circumstances indicative of fellow believers who are not willing to pay the price of an authentic Christian profession. They want to be admired and popular. They don't want to be perceived as unacademic, judgmental, intolerant, bigoted or unloving. They are paralysed by the fear of ridicule and consequently have become impotent for kingdom work.

Lastly, Grey says the Christians living in Nero's palace were a subdued people. They had been brought from Roman provinces around the world, serving in various capacities, but they had all been vanquished in conquest. "Yet, they did not give up their faith in Christ when they had been brought into subjection to an earthly ruler. And today, regardless of who your superior may be in any of life's complex relationships, dare to be true to Jesus; dare to live the Christian life in spite of anything and everything that may come," charges Grey.

In a day when the culture grows increasingly hostile to a genuine Christian witness, Grey's sermon, a voice from almost six decades ago, reminds us of those principles of faith that are timeless. For fellow warriors, who have observed true religion failing and the light going out in our society, for those who have felt our sword has not been long enough for the struggle, let us simply put another step to our sword.