Rev. Mark H. Creech
This is the plan of history

December 3, 2016
Although I cannot remember where I first read the story, several years ago when the Soviet Union was still alive, a group of Seminary students took a tour of the Soviet Embassy in our nation's capital. They were being led by a very articulate Soviet diplomat, when one member of the group asked the diplomat a serious question.

"Sir," the student began his inquiry, "What happens if the Soviet Union and the United States ever go to war?" The Soviet reportedly sat back in his chair for a moment, obviously thinking carefully about his response.

"You know, I don't really believe the two great super powers ever will go to war," he replied. "The results of such a conflict would be unthinkable. The world would never recover from it."

"But more importantly," the diplomat added, "we Communists believe that we can take this world without ever firing a shot. You see, we believe this is the plan of history."

When first hearing that story I thought to myself, "You know, it's really only Christians who can authoritatively talk about a 'plan of history.'" Governments rise and fall, but God's hand sovereignly directs the course of human events moving the world closer with each passing day toward what the Bible calls the kingdom of God.

This will be a time when Christ will return and establish his rule on the earth – when every wrong will be made right and justice will roll on like water – when the lion will lay down with the lamb – when the nation's shall beat their swords into plowshares and their spears into pruning hooks – when every knee shall bow and every tongue shall confess that Jesus Christ is Lord.

God has a plan that cannot ultimately be circumvented, and this plan is centered in his Son, Jesus Christ.

After his resurrection, Jesus spoke about that plan with some travelers on their way to the city of Emmaus. The Bible says, "And beginning at Moses and all the prophets, he expounded unto them in all the Scriptures the things concerning himself" (Luke 24:27).

The late John F. Walvoord, former chancellor of Dallas Theological Seminary and author of "The Prophecy Knowledge Handbook," once wrote:

"The importance of prophecy should be evident, even superficially, in examining the Christian faith, for about one fourth of the Bible was prophecy when it was written. It is evident that God intended to draw aside the veil of the future and to give some indication of what his plans and purposes were for the human race and for the universe as a whole."

The late Dr. D. James Kennedy and Jerry Newcombe in their book, "What if the Bible Had Never Been Written," reference an incredible story about Lee Strobel and his study of Bible prophecy and its relationship to Jesus Christ.

Strobel earned a law degree from Yale. He was an award winning legal affairs journalist for the Chicago Tribune, and a skeptic. But after using his exceptional journalistic skills to disprove Christianity, he ended up becoming a believer instead.

Strobel was intrigued with the work of Peter Stoner, a mathematician, who advocated that the chances that any one person would even fulfill 8 of the Old Testament prophecies concerning the Messiah were 10 to the 17th power.

Strobel explained those odds in this way:

"To try to comprehend that enormous number, I did some calculations. I imagined the entire world being covered with white tile that was one-and-a-half inches square – every bit of dry land on the planet – with the bottom of just one tile painted red.

"Then I pictured a person being allowed to wander for a lifetime around all seven continents. He would be permitted to bend down only one time and pick up a single piece of tile. What are the odds it would be the one tile whose reverse side was painted red? The odds would be the same as just eight of the Old Testament prophecies coming true in any one person throughout history!"

Certainly that alone ought to be convincing enough evidence that Jesus is who he claimed to be. But Stoner demonstrated the chances of anyone fulfilling 48 prophecies were 10 to the 157th power. Strobel said this was more like finding a single predetermined atom among all the atoms in trillions of universes the size of our own. 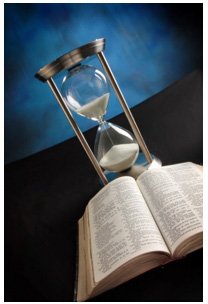 There are more than two thousand prophecies found in the Scriptures and 333 of them deal with the coming of the Messiah. The life of Jesus astonishingly fulfills every one of them.

Faith in Jesus is not a leap into the dark. I suggest it is adhering to the overwhelming preponderance of the evidence.

If Jesus fulfills all of the prophecies related to his first coming, what reason could one possibly have to doubt the numerous others concerning his second coming.

From the record of the fall of mankind in the Book of Genesis – to the arrival of Christ in the Gospels – to the ultimate redemption of mankind described in the Revelation, there is a trajectory of history toward the permanent establishment of Christ's reign. Those who believe in Christ, those who turn from their sins and surrender to his gracious and benevolent Lordship, will be a part of this blissful place. Those who refuse to believe will lose everything they have now and abide forever where there will be great sorrow and regret.

This is the only viable and lasting plan of history, everything else is just temporary. This is the final consummation. Therefore, I implore you to believe – believe while it is still day – believe before the night comes and opportunity is gone forever.